Terunofuji beat fellow ozeki Takakeisho in a playoff to clinch the Summer Grand Sumo Tournament on Sunday, capping his epic return to the sport's second-highest rank this month by capturing the fourth Emperor's Cup of his career.

Terunofuji (12-3) lost his one-win lead after swiftly getting thrust down by Takakeisho (12-3) in the day's final scheduled bout, forcing a championship playoff at Tokyo's Ryogoku Kokugikan. But the 29-year-old Mongolian showed his mettle to claim the decider for his first title as an ozeki. 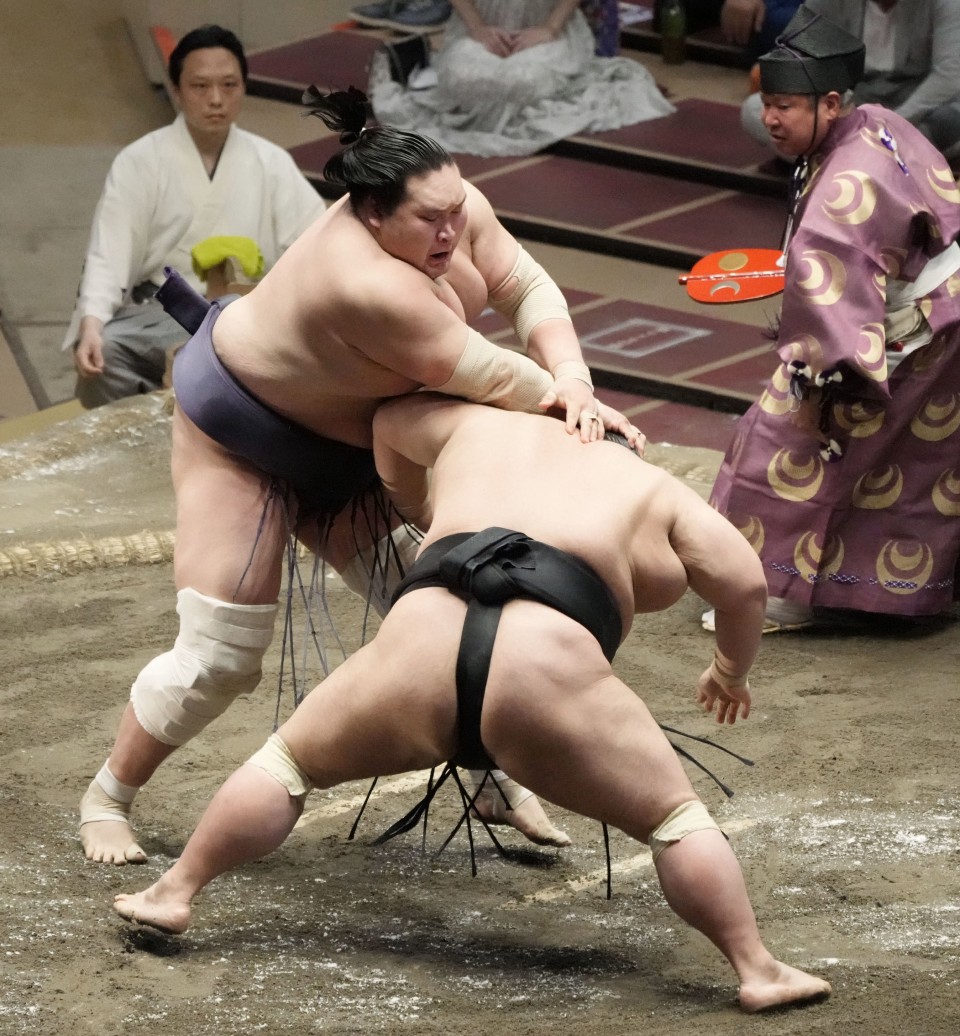 Terunofuji (L) beats Takakeisho in a playoff to win the Summer Grand Sumo Tournament at Ryogoku Kokugikan in Tokyo on May 23, 2021. (Kyodo)

After falling quickly in their first encounter, Terunofuji kept his distance in the playoff, getting the better of the exchanges of shoves to force Takakeisho into a halfhearted pull-down attempt and comfortably slapping him down to the sandy surface.

"I'm happy. I've always been losing in the playoffs. I feel all the efforts paid off," said Terunofuji, whose latest playoff defeat came in November, when he beat Takakeisho to tie him at 13-2 before losing to him in the decider.

It was also the third time in the last four tournaments that the title came down to a bout between the two wrestlers with Terunofuji clinching his title in March with a final-day win over Takakeisho.

With his latest championship, Terunofuji will enter the July meet with a chance for promotion to the sport's highest rank of yokozuna. An ozeki needs two consecutive championships or a record as good for the highest rank.

"It's not something that I can become just because I want to, and that's why I want to experience it," he said of the challenge. "It's good if I can achieve it, it's also good in case I can't."

"I'll give my all and hope to be walking proud after giving every ounce of my strength. It's no good doing the same thing as what I've been doing, I want to strive further."

No. 8 maegashira Endo (11-4), who beat Takakeisho and Terunofuji the previous two days to set up a potential three-way playoff, was eliminated from title contention in a loss to ozeki Shodai (9-6).

Endo came out slightly on top off the initial charge, forcing Shodai to step back toward the edge. But a right beltless throw from Shodai had Endo off balance and a subsequent swift attack from the left by the ozeki left the maegashira with no room to maneuver before he was pushed out.

The 30-year-old Endo said he was "happy to be so highly rated" after receiving his fourth Technique Prize for his performance during the meet, before adding, "I never got the sense (of being involved in the title race)."

Terunofuji won his first title in May 2015 and also secured his first promotion to ozeki after the meet, but injuries to both knees and illness plagued him since.

He dropped from ozeki after September 2017 and went spiraling down further -- as low as the sport's second-lowest division of jonidan in March 2019.

Terunofuji bounced back in a fairytale manner, however, stunning the sumo world last July when he won his second career title upon his return to the elite makuuchi division, before winning his third this March that earned his re-promotion to ozeki.

Terunofuji became the first ozeki to win a championship in his return to the rank since the July 1969 introduction of the current system that relegates ozeki to the next lower rank after two successive losing records. 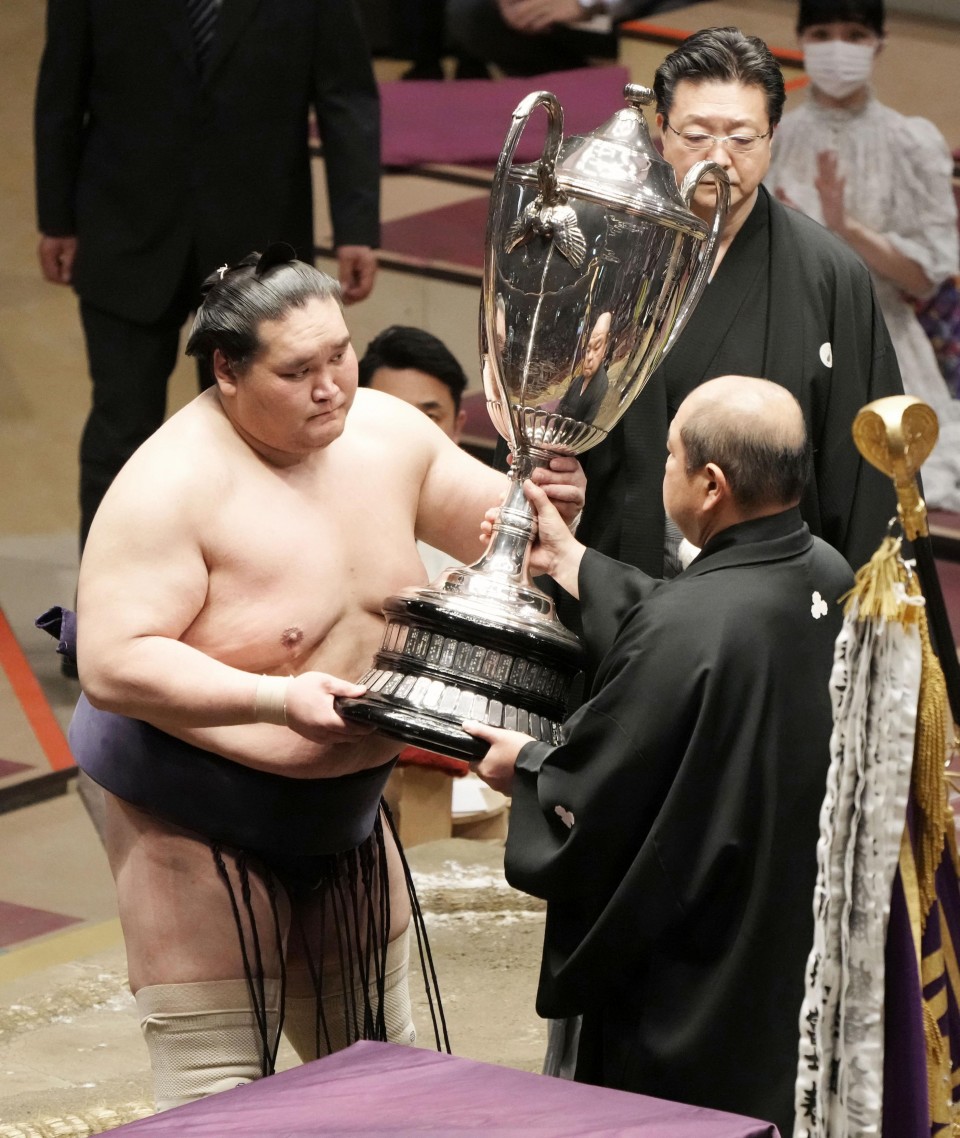 Terunofuji (L) receives the championship trophy from Hakkaku, head of the Japan Sumo Association, after winning the Summer Grand Sumo Tournament on its final day at Ryogoku Kokugikan in Tokyo on May 23, 2021. (Kyodo)

His first loss this month came on the 11th day when he was ruled to have fouled No. 4 Myogiryu, ringside judges claiming that the ozeki grabbed the hair -- a move banned in the ancient sport -- while executing a throw against the maegashira.

Elsewhere on the final day, Takayasu (10-5) had a good chance of adding another win but fell to out-of-form fellow sekiwake Takanosho (5-10), who withstood sustained pressure before slapping down the tiring former ozeki in a lengthy bout.

Komusubi Mitakeumi (10-5) wrapped up the meet by reaching double figures, pushing out giant No. 6 Mongolian Ichinojo (9-6) with little trouble.

Fellow Komusubi Daieisho (6-9) thrust out No. 4 Myogiryu (6-9) to end on a winning note, but the New Year meet champion will likely face demotion from the three "sanyaku" ranks below yokozuna.

No. 1 Wakatakakage (9-6) fell to a pull-down by No. 12 Kotoeko (9-6) but was rewarded for his steady performance with his second straight Technique Prize, with the first promotion to sanyaku now all but certain.

"It's pleasing. It makes me think I'm getting stronger and boosts my confidence," Wakatakakage said of the award. "I've been focusing on my initial charge, driving in low and attacking upward...I'll look forward to the ranking announcement."

Responding to government guidance due to a coronavirus state of emergency in Tokyo, the Japan Sumo Association started the ongoing tournament behind closed doors but was allowed to admit up to 5,000 fans from the fourth day.