Unbeaten since their opening-round loss to Kawasaki Frontale, Marinos took the lead in the 40th minute at Nissan Stadium on Vermaelen's botched defensive play.

The former Arsenal and Barcelona center-back put the ball into his own net while trying to neutralize a cross from Thailand defender Theerathon Bunmathan, who had been set free down the left touchline by a long, diagonal ball from Amano.

Vissel captain Andres Iniesta came off the bench in the 59th minute for his first J1 game since being sidelined by a thigh injury sustained during the Asian Champions League in December. 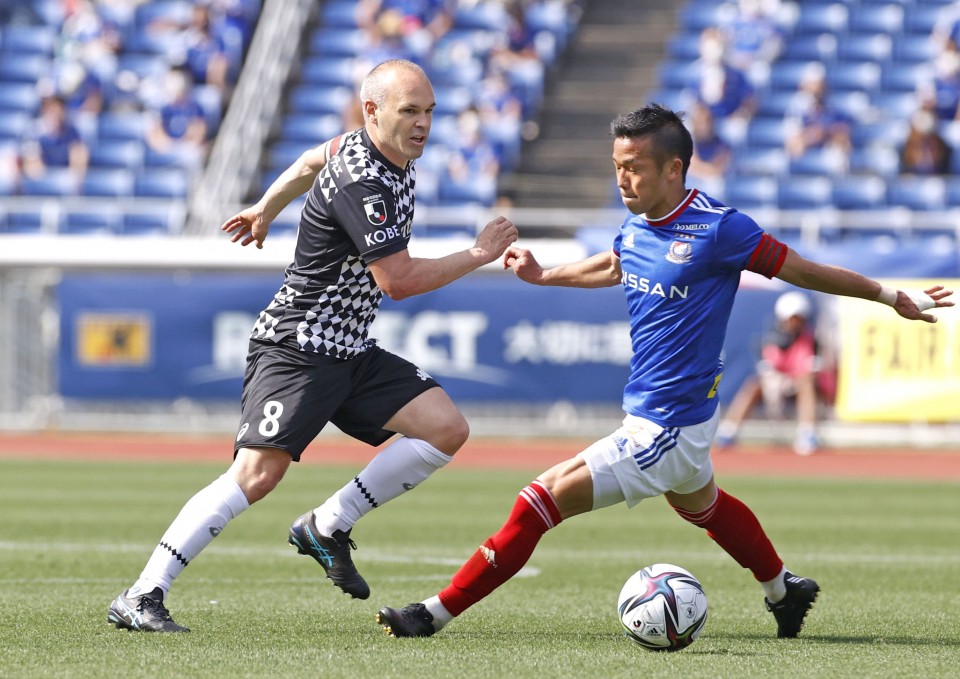 The introduction of the star playmaker, who played midweek in a scoreless Levain Cup draw with FC Tokyo, gave the visitors momentum as they pursued an equalizer.

Kyogo Furuhashi had a chance to score on a breakaway in the 77th minute but hit the side netting.

Amano sealed the points for Ange Postecoglou's side three minutes later when he was first to the rebound after Kobe keeper Daiya Maekawa blocked a shot by Brazilian forward Elber.

Former Australia manager Postecoglou said Marinos, winners of their past four J1 outings, deserved the victory after dictating the terms against a strong Kobe side.

"We pressed, we worked really hard and created good chances. It was a good victory," Postecoglou said.

"We had to work hard for the 90 minutes (but) I thought we were in control for most of the game. We didn't give them too many opportunities and I thought we had some good ones ourselves."

In other J1 action, Avispa Fukuoka overcame visiting Kashiwa Reysol 1-0 thanks to Takaaki Shichi's winner early in the second half.

At Shizuoka's IAI Stadium, Kohei Tezuka equalized in the 63rd minute to earn Yokohama FC a share of the points in a 1-1 draw with Shimizu S-Pulse.

Shonan Bellmare defeated visiting Oita Trinita 2-0 following goals from Shintaro Nago and Wellington, Consadole Sapporo came from behind to beat Tokushima Vortis 2-1 on the road thanks to an Anderson Lopes brace, and Kashima Antlers won 3-0 at home against FC Tokyo.

Football: J-League to seek compensation over state of emergency

Football: J-League shuts fans out of 4 games in Tokyo amid virus emergency