Popular Japanese actress Yui Aragaki and singer-songwriter Gen Hoshino are set to marry, they said Wednesday, after co-starring in a 2016 TV drama in which they played a couple that entered into a contract marriage.

"We hope that we can support each other and spend a lot of prosperous time together," the couple said in a joint statement released by their agencies.

More recently, the two again co-starred in a sequel of the drama series "Nigeru wa haji daga yaku ni tatsu," (The Full-Time Wife Escapist), aired in January. The series were based on the manga written by Tsunami Umino under the same title. 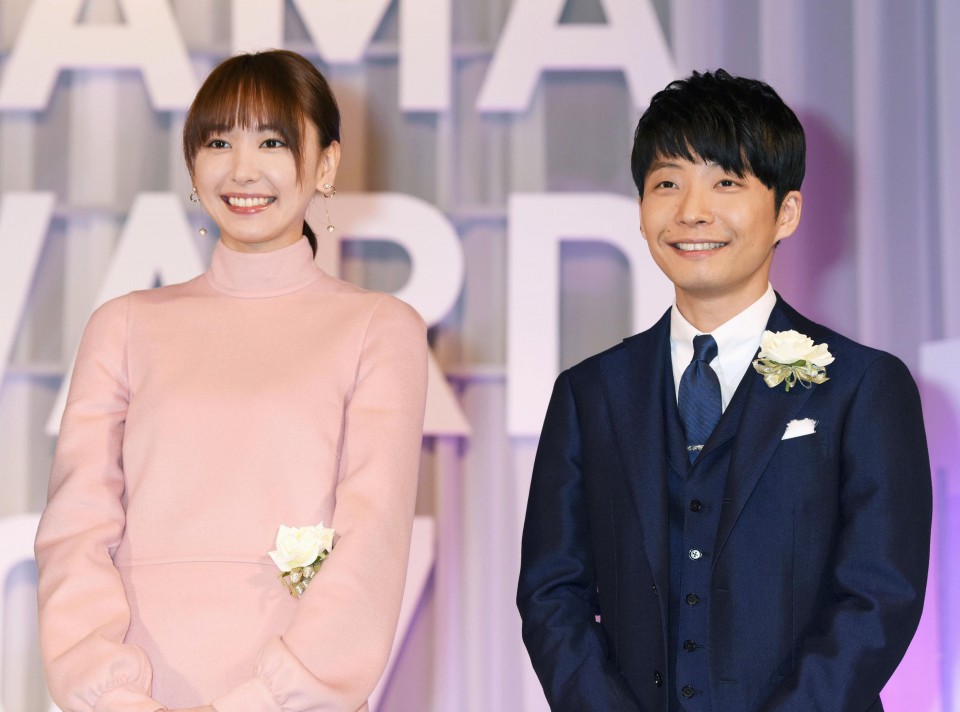 Actress Yui Aragaki (L) and singer-songwriter Gen Hoshino smile as a TV drama they played the leads in wins an award in October 2017 in Tokyo. (Kyodo)

The theme song by Hoshino featuring the cast dancing the "Koi Dance," meaning love dance, became a craze in Japan, with its official video on YouTube having gained 231 million views as of Wednesday evening.

Born in Okinawa, Aragaki, 32, started her career as a teen model and quickly rose to stardom after appearing in a TV commercial for Ezaki Glico Co.'s "Pocky" chocolate-covered biscuit sticks.

Known as "Gakki" for her moniker, she appeared in a number of popular films and TV series including the medical drama series "Code Blue," featuring Japanese male idol Tomohisa Yamashita, among others.

Hoshino, 40, debuted as a solo artist in 2010 and has released many songs, including theme songs for the animated "Doraemon" TV series and movie.

Last year, then Prime Minister Shinzo Abe was criticized for joining the social media bandwagon in response to a short video "Uchi de Odoro" (Dancing on the Inside) posted on social media by Hoshino, who invited people to stay at home to curb the spread of the novel coronavirus.

After making a name for himself as a singer-songwriter, Hoshino expanded his career to include acting and writing books.

Following media reports of the couple's announcement, many people quickly took on social media to congratulate them, with Aragaki's nickname Gakki having become the top trending word on Twitter in Japan.

Tsunami Umino, author of the original manga, said "congratulations!!!" in her Twitter post, while expressing surprise that the couple are planning to get married in reality just like in her manga stories.

The government's top spokesman Katsunobu Kato also told a news conference that "I heard it from the breaking news. I would like to offer them congratulations."