A Japanese publishing company on Tuesday took out a double-page spread in the morning editions of three major dailies to boldly criticize the government's poor handling of the coronavirus pandemic.

"We have no vaccine. We have no medicine. Are we supposed to fight with bamboo spears? At this rate, we'll be killed by the government," the corporate advertisement run by Takarajimasha Inc. read against a backdrop of children training to fight during wartime, complete with a magnified coronavirus particle in the middle. 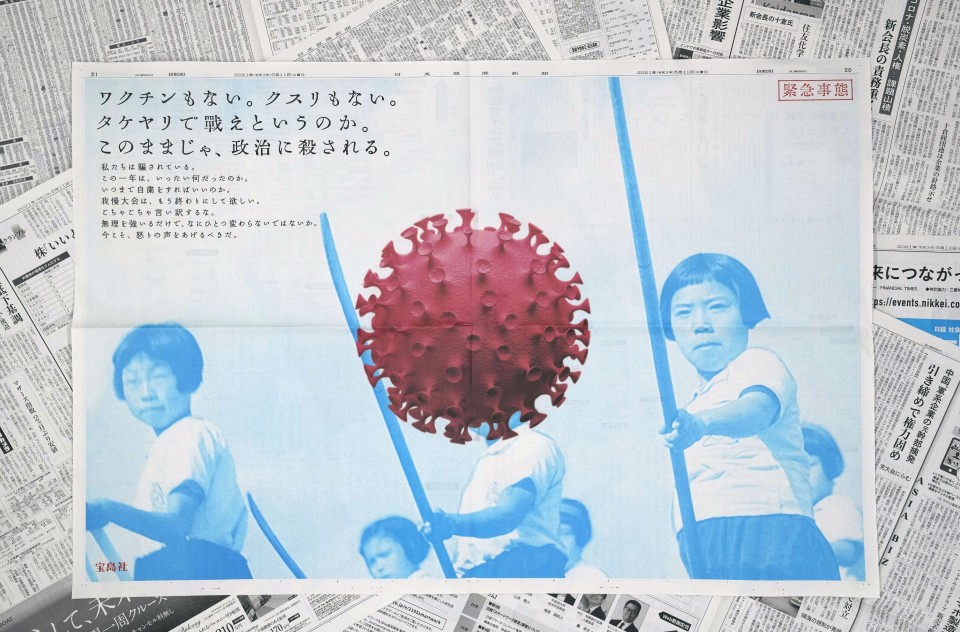 The double-page advertisement ran by Takarajimasha Inc. in the Nikkei's morning edition on May 11, 2021. (Kyodo)

The ad, which appeared in Tuesday's morning editions of the Nikkei, the Asahi Shimbun and the Yomiuri Shimbun, contained a further seven lines of smaller text berating the government for failing to protect its citizens.

"What has been the point of the past year?" one line read, while another said, "Now is the time to raise our voices in anger."

The sentiments found favor with many on Twitter, with users posting remarks such as, "I'm sure more opinions like this will arise in the future," and "Even though we should speak out more against the government, we lack such attitudes in our culture."

Takarajimasha, which has been running newspaper ads containing brazen social messages since 1998, also created a stir in January with another piece it ran featuring a photo of children cleaning their desks in a classroom and the words, "I'm doing it without being told."

The ad was topped off with the sarcastic message, "They say the spread of the virus is the responsibility of the individual."