Shohei Ohtani is receiving deserved plaudits for his hot start to the 2021 season, and the people behind him are putting their all into ensuring baseball's two-way phenomenon keeps living up to the hype.

Ohtani has had to clear the hurdles that come with being an international prospect attempting to chart a path to Major League Baseball stardom, and his personal interpreter and physical trainer have proven key in helping him find his way.

Ippei Mizuhara, who worked as an interpreter for Japan's Nippon Ham Fighters, where Ohtani played for five seasons, not only offers Ohtani help in communicating in English but is also an ever-present figure in the dugout and at training while providing the Los Angeles Angels player a foe to battle in online games. 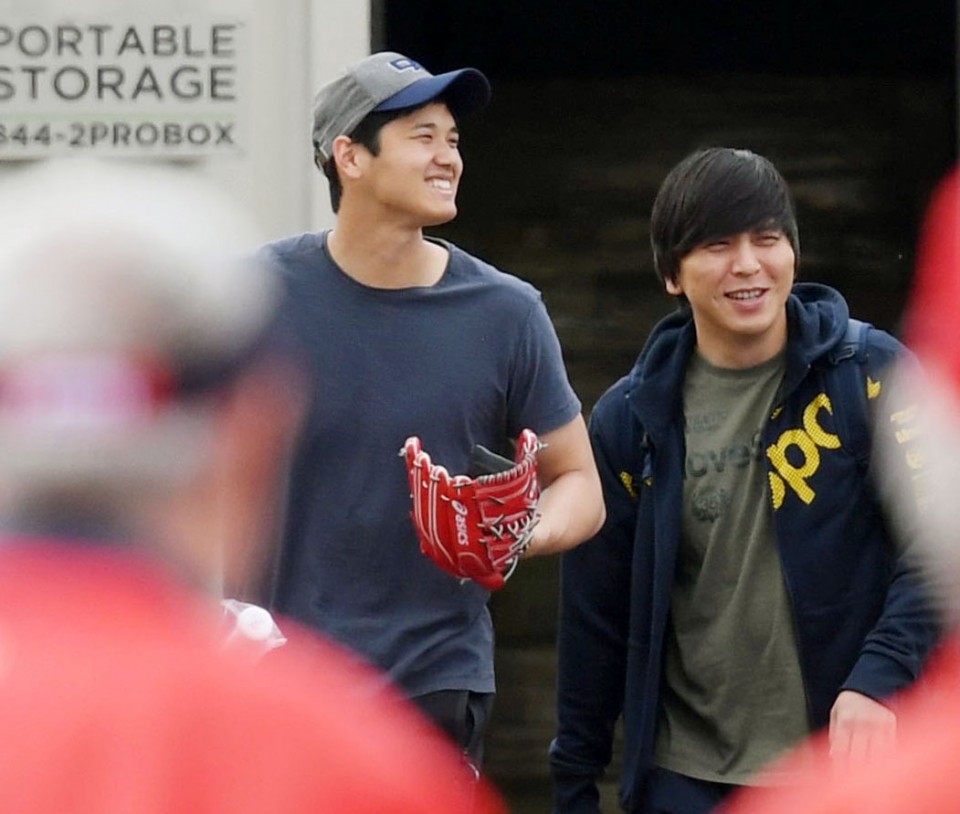 Shohei Ohtani (L) and his personal interpreter Ippei Mizuhara are pictured at spring training in Tempe, Arizona in February 2018. (Kyodo)

Mizuhara gave Ohtani rides to and from the ballpark until Ohtani got his California driver's license after his second season in the United States, and even made grocery runs for him when players were advised to stay home last year because of the coronavirus outbreak.

Angels manager Joe Maddon said the two go together like "peanut butter and jelly," a perfect sidekick for Ohtani as he navigates baseball's biggest challenges.

In his fourth season in the majors, Ohtani is pitching at the level he did in 2018, when he went 4-2 with a 3.31 ERA in 10 starts before an elbow injury ended his season on the mound. As a rookie, he became the first major league player since Babe Ruth in 1919 to pitch 50 innings and hit 15 home runs in the same season.

And for the first time since 2016, his team is willing to give up the designated hitter so Ohtani can bat on the same day he pitches. 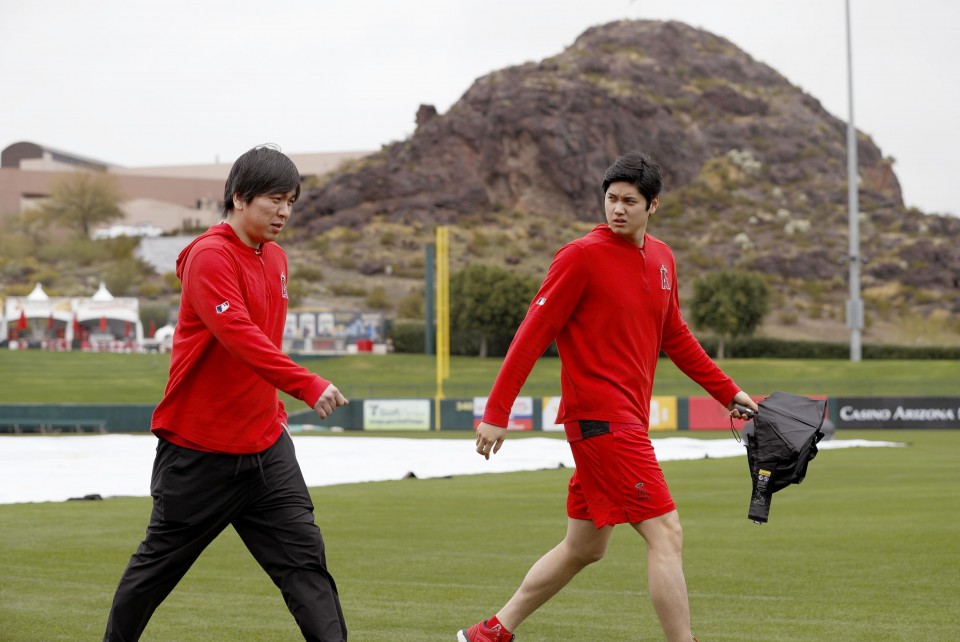 Shohei Ohtani (R) and his personal interpreter Ippei Mizuhara are pictured in this file photo taken in Tempe, Arizona in February 2019. (Kyodo)

Before missing three and a half months because of the sport's coronavirus shutdown in 2020, Ohtani had spent more than 17 months rehabbing as a pitcher after Tommy John surgery.

This year, Maddon said the 26-year-old is "full go" on both the mound and the plate. Prior to this year, Ohtani had been benched on the days before and after he pitched, but under new general manager Perry Minasian, Maddon has let his star bat and pitch to his heart's content.

Ohtani earned his first win since May 2018 last month and credited his success to those who helped him along his journey to recovery.

Yoichi Terada, who has been with the Angels after joining in 2011 as former Angels pitcher Hisanori Takahashi's interpreter and massage therapist, has trained with Ohtani and helped maintain his body so it can deal with the unique two-way physical challenges he faces.

Like most players, Ohtani is extremely picky about his bats, choosing those he thinks will give him the most repeatable swings rather than extra distance. He is also very particular about his cleats and gloves, wanting them to feel just right.

Ohtani also engaged Japanese food company Meiji to analyze a blood sample during the most recent off-season, asking its staff to help him better understand the connection between nutrition and performance.

If Ohtani is mentioned in the same breath as the likes of Ruth and other all-time greats for the rest of his career, it will be a testament to both his own commitment to improvement and the work of those who help keep him going.