A Japanese freelance journalist who spent nearly four weeks in a Myanmar prison before returning to Japan on Friday said the prison where he was being kept held many political prisoners who had been subjected to harsh interrogations.

Yuki Kitazumi said in an online interview from a hotel outside Tokyo on Saturday night that he will work from Japan to help junta-ruled Myanmar return to democracy, adding those incarcerated in the prison had pleaded with him to report on what is going on in the Southeast Asian country. 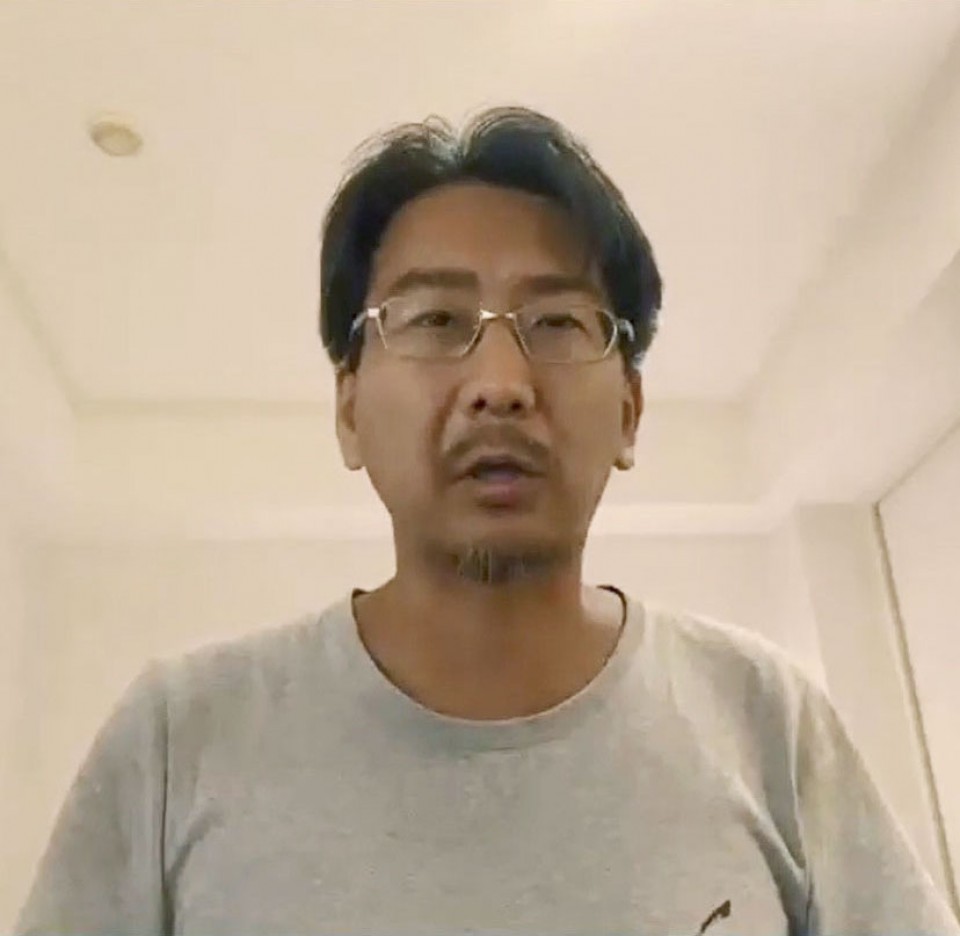 Yuki Kitazumi gives an online interview from a hotel in Narita, Chiba Prefecture, on May 15, 2021. (Kyodo)

The 45-year-old was arrested on April 18 on suspicion of spreading "fake news" regarding junta-ruled Myanmar and kept in the infamous Insein Prison in the country's largest city Yangon, which is known for holding many political prisoners.

Kitazumi said that in the prison, political prisoners recounted to him being punched and kicked while blindfolded, or being tortured nearly fatally. They also spoke of being denied food for days, he said.

Time and again, Kitazumi said, political prisoners pleaded with him to tell the wider world what is going on in their country following a February coup that ousted the country's civilian government.

The military currently holds about 4,000 people in detention, according to the Assistance Association for Political Prisoners, a rights group monitoring the situation in Myanmar.

Kitazumi was questioned seven to eight times while in detention. "Even though I wasn't subjected to violence, an interrogator banged the desk hard when I refused to sign a statement containing things I had no recollection of saying," he said. "That frightened me."

While in prison, the former Nikkei business daily reporter was not allowed to use a pen, so he made "ink" from instant coffee powder and applied it to a feather he picked up to record what he saw there on a scrap of paper, Kitazumi said.

Once he learned of his impending release, Kitazumi and a fellow political prisoner he had gotten to know hugged each other, and he promised to deliver on their plea, he said.

In the interview, Kitazumi once again expressed gratitude to people for working for his release.

He said he will report on Myanmar from Japan, expressing hope that the Myanmar issue will draw interest from as many people as possible.

While in Myanmar, the journalist had covered anti-coup protests and posted on social media information deemed critical of the military.

On Thursday night, state-run TV reported that the junta decided to release Kitazumi "in consideration of cordial relations between Myanmar and Japan up to now and in view of future bilateral relations, and upon the request of the Japanese government special envoy on Myanmar's national reconciliation."

Kitazumi boarded a flight from Yangon on Friday, the same day he was released, and arrived at Narita airport near Tokyo later that night. He has been quarantining at a hotel nearby.

Suu Kyi to appear in court on May 24: lawyer