The incident, which occurred off Ehime Prefecture and involved the 11,454-ton Japanese ship Byakko and a 2,696-ton Marshall Islands-registered chemical tanker the Ulsan Pioneer was reported at around 11:55 p.m. Thursday, the Imabari Coast Guard Office said. 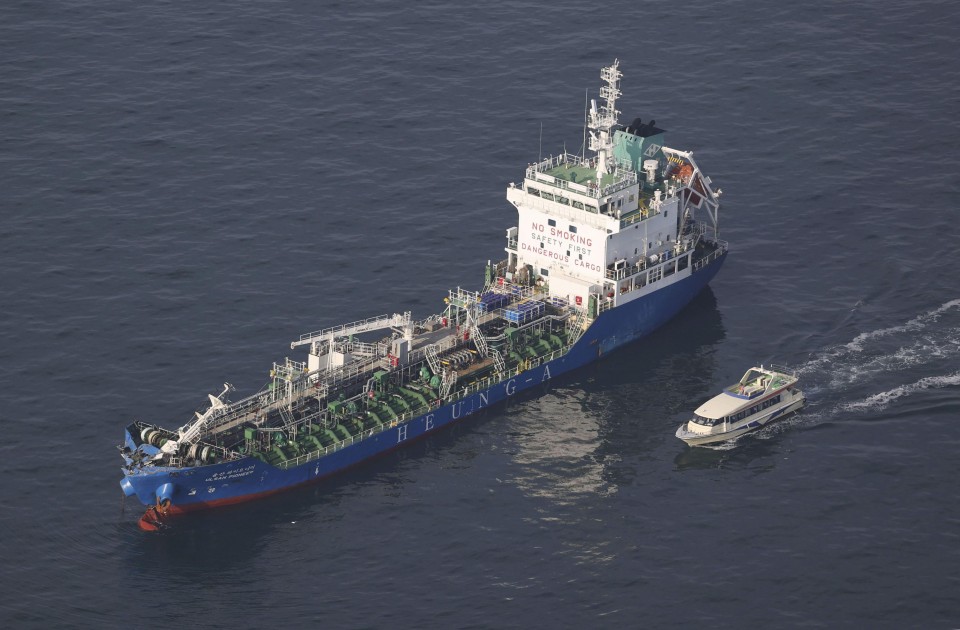 Photo taken from a Kyodo News airplane shows a Marshall Islands-registered chemical tanker that collided with a Japanese cargo ship off the coast of Ehime Prefecture, western Japan on May 28, 2021. (Kyodo)

The ship sank at around 2:45 a.m. Friday. Of the nine rescued, five were collected by a coast guard patrol vessel and four by a private container ship that was nearby, the office said.

The chemical tanker has 13 crew members -- eight from South Korea and five from Myanmar -- and no serious injuries have been reported among them. The ship sustained significant damage to its bow but remains afloat.

According to Prince Kaiun Co. based in Kobe, which operates the Japanese ship, the 170-meter-long Byakko left port in Kobe in western Japan at 4:30 p.m. Thursday for Kanda in Fukuoka Prefecture, southwestern Japan. It was carrying auto parts.

The chemical tanker left a Chinese port on Tuesday and was scheduled to arrive at Osaka port at 2 p.m. Friday.

It is the second major collision involving a Japanese vessel this week after a fishing boat capsized off the Hokkaido coast on Wednesday after coming into contact with a Russian ship. Three crew on the Japanese boat were killed in the incident.