Japanese Prime Minister Yoshihide Suga and European Union leaders called for "peace and stability" across the Taiwan Strait on Thursday as mainland China steps up pressure on the self-governed island. 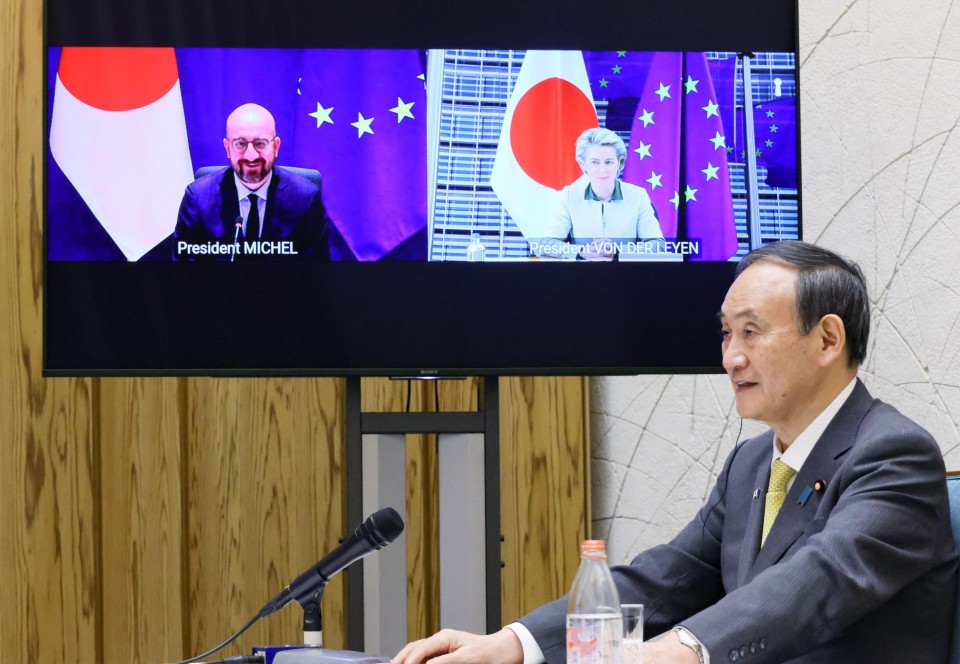 According to a Japanese Foreign Ministry official, it was the first-ever reference to Taiwan in a Japan-EU joint statement, using identical language to the statement issued after Suga's meeting with U.S. President Joe Biden last month.

Suga and the EU leaders voiced serious concerns about the situation in waters surrounding China and said they "strongly oppose any unilateral attempts to change the status quo and increase tensions."

Beijing has been stepping up its claim to the Japan-administered Senkaku Islands in the East China Sea, sending coast guard ships to nearby waters in what Tokyo sees as an attempt to exert control.

China has also carried on with the militarization of artificial islands in the South China Sea, where it has overlapping sovereignty claims with its neighbors.

The EU is seeking to play a larger role in the Indo-Pacific, adopting a strategy last month for cooperation with partners in the region.

Michel and von der Leyen expressed support for staging the Tokyo Olympics this summer in a "safe and secure manner," despite mounting concerns over the games going ahead during a global pandemic.

The Olympics, set to begin July 23, will be "a symbol of global unity in defeating COVID-19," the joint statement said.

Suga and the EU leaders affirmed their commitment to a fair and affordable distribution of vaccines and vowed to work toward expanding production and keeping supply chains open.

According to a separate Japanese government official, Suga also called for vaccine shipments from the EU to be delivered to Japan smoothly, after the country saw a shortage of supply earlier this year in part due to the bloc's export controls.

Suga and the EU leaders also agreed to enhance cooperation in tackling climate change, forming a "green alliance" to cut greenhouse gas emissions to net zero by 2050 and create jobs.