The Japanese government said Tuesday it will fix an embarrassing COVID-19 vaccine booking system fault that allowed reservations to be made using nonexistent application numbers.

The announcement came a day after the government started accepting online bookings for elderly people to receive shots at large Self Defense Forces-staffed vaccination centers in Tokyo and Osaka as it attempts to ramp up its inoculation rollout amid a fourth wave of infections. 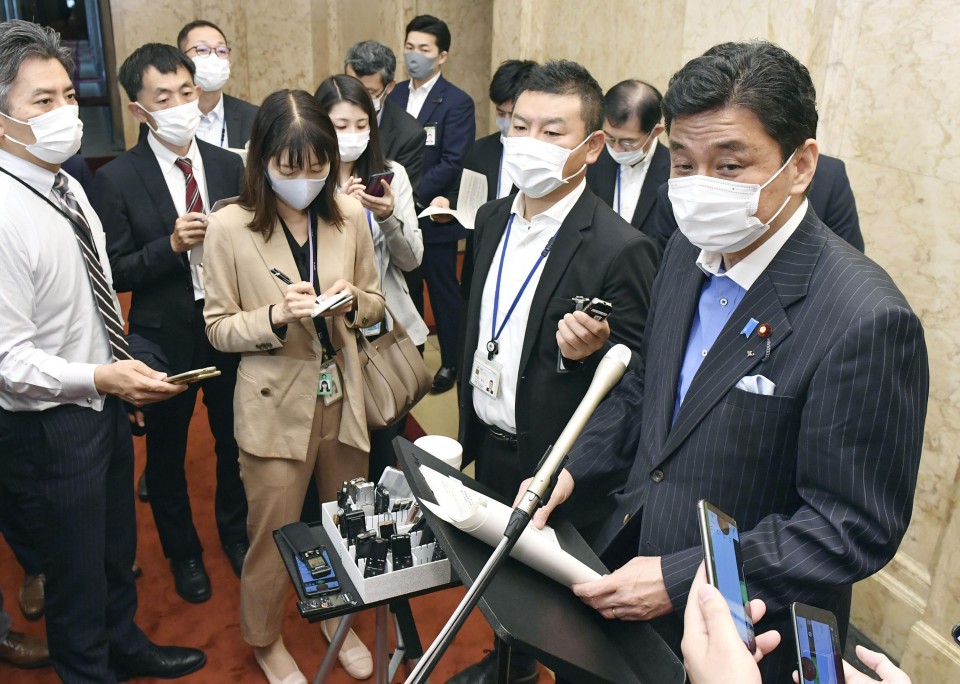 Japanese Defense Minister Nobuo Kishi (R) meets the press in Tokyo on May 18, 2021. Kishi said part of the online booking system will be fixed for reservations with large state-run vaccination centers in Tokyo and Osaka, following problems observed a day earlier -- the first day of taking reservations from elderly people. (Kyodo) ==Kyodo

The state-run booking system for the vaccination center in Tokyo was found to accept municipality code numbers and vaccination ticket numbers that were not issued by respective authorities.

"We plan on fixing (the system) so we can confirm the inputted data are genuine information," Defense Minister Nobuo Kishi said at a press conference.

"It would have been better if we had fixed it from the start," the minister said, adding that the ministry does not plan to conduct a large system overhaul.

The problem was reported Monday by major news organizations Asahi Shimbun Publications Inc. and the Mainichi Shimbun, which signed up to test the system using fictitious information. Both said in their reporting that they had canceled reservations they created.

Kishi said he takes the actions of the companies "very seriously," calling them "malicious and very regrettable" despite the significant flaws they brought to light.

He asked the public not to make appointments using false information to ensure slots are available to those who are eligible and so vaccines are not wasted.

The problem with vaccination ticket numbers, issued to eligible individuals by their municipality, was put down to a failure to cross-reference data in the system with that from local municipalities, according to the Defense Ministry.

"We did not think it appropriate for the Defense Ministry to retain private information of every individual in the country subject to vaccination," Kishi said.

At a separate press conference, Chief Cabinet Secretary Katsunobu Kato warned the government may consider taking legal action against people or groups deemed to have taken advantage of the system failure in a malicious manner, such as making many reservations using fictitious data.

Currently, residents of Tokyo's 23 wards and Osaka city aged 65 or older are able to make appointments via the Defense Ministry's website and the Line messaging app but spots are filling up quickly with the launch of online bookings.

The government moved to set up mass vaccination centers operated mostly by Self-Defense Forces doctors and nurses to accelerate its vaccine rollout, given only around 3 percent of its population of 126 million has received at least one shot of a vaccine, the slowest vaccination rate among major economies.

Some municipalities that run local inoculation venues have experienced problems processing appointments as phone lines and computer systems have been overloaded.

According to the Defense Ministry, around 44,000 slots for the Tokyo center were booked by 7 a.m. Tuesday out of the 50,000 that had been made available between May 24 and May 30.

Additionally, all of the 25,000 slots for the Osaka center were filled within 25 minutes on Monday afternoon, the ministry said.

Japan began inoculation of its elderly population of about 36 million in mid-April after its vaccination effort for health care workers started in February.