Demand for Japanese cosmetics in China has continued to rise despite fewer opportunities to go out amid the coronavirus pandemic as local consumers apparently appreciate their quality, with Tokyo retaining the top supplier status in terms of value in 2020.

China's imports of cosmetics from Japan in 2020 soared more than 30 percent from the previous year to about $4.3 billion, surpassing $3.3 billion from South Korea and other major suppliers such as France and the United States, according to the Japan External Trade Organization. 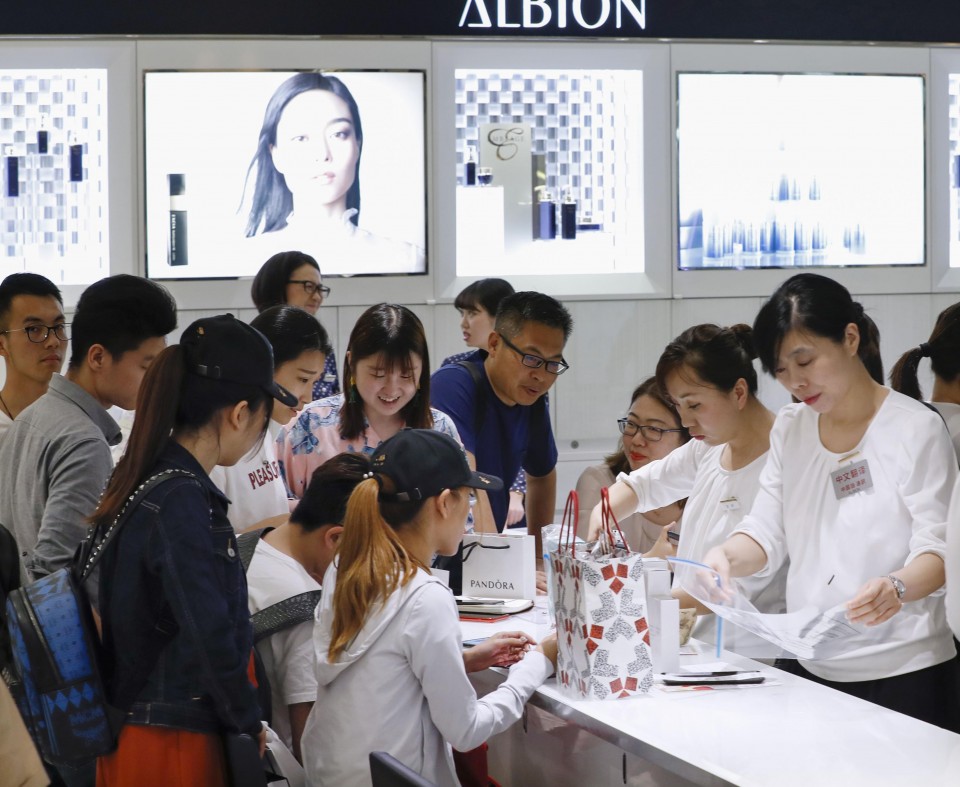 Photo taken on May 16, 2018 shows a cosmetics section of a department store in Tokyo's upscale Ginza district crowded with foreign tourists in Japan. (Kyodo)

In terms of import value, Japan overtook South Korea and ranked top in 2019.

"Many Chinese consumers trust Japanese cosmetics, which they feel are compatible with their skin types," said Etsu Ho, a researcher in JETRO's China and North Asia Division.

"China's imports of Japanese cosmetics also increased as Japanese companies are working hard to expand their sales through cross-border e-commerce platforms," she added.

An increasing number of Japanese cosmetics companies are now stepping up efforts to reach out to Chinese consumers using cross-border e-commerce platforms, which are popular in China, because the number of Chinese tourists to Japan has plunged due to travel restrictions amid the pandemic.

Japanese brands are strong in basic skin-care products, such as skin and milky lotions as well as facial masks.

Chinese consumers' demand for those Japanese items did not decline even during the pandemic, which forced people to stay home and reduced opportunities for women to wear makeup, Ho said.

In recent years, China's cosmetics market has been expanding on the back of growing beauty consciousness among Chinese consumers. The Chinese government also lowered import tariffs on foreign products, including cosmetics, from July 2018.

The total value of China's cosmetics imports reached about $17.3 billion in 2020, jumping from $4 billion in 2016, the trade promotion agency said.

Before the pandemic, Chinese visitors to Japan spent substantial sums on cosmetics in shopping sprees known as "explosive buying" at drugstores and department stores. Japanese brands such as Shiseido and Pola are well known among Chinese consumers.

According to data compiled by the Japan Tourism Agency, 81.9 percent of visitors to Japan from mainland China purchased cosmetics and perfumes among other souvenirs in 2019, with spending on such items per visitor reaching 52,142 yen ($477), far higher than the sums spent by those from South Korea, Taiwan and the United States.

The Chinese cosmetics market is expected to continue growing, but competition is likely to intensify as Chinese brands have also increased the strength of their products over the past few years.

"Amid the tough competition, we'll need to keep a close eye on how long Japanese cosmetics companies can maintain their top share" among overseas suppliers, Ho said.

"It is important for the Japanese firms to promote their products through SNS, consider what Chinese users want and speed up the cosmetics development process as consumers seek new products," she added.