Bach was planning to be in Hiroshima to participate in Monday's leg of the torch relay but he canceled his trip to Japan because of surging cases of COVID-19 in the country. 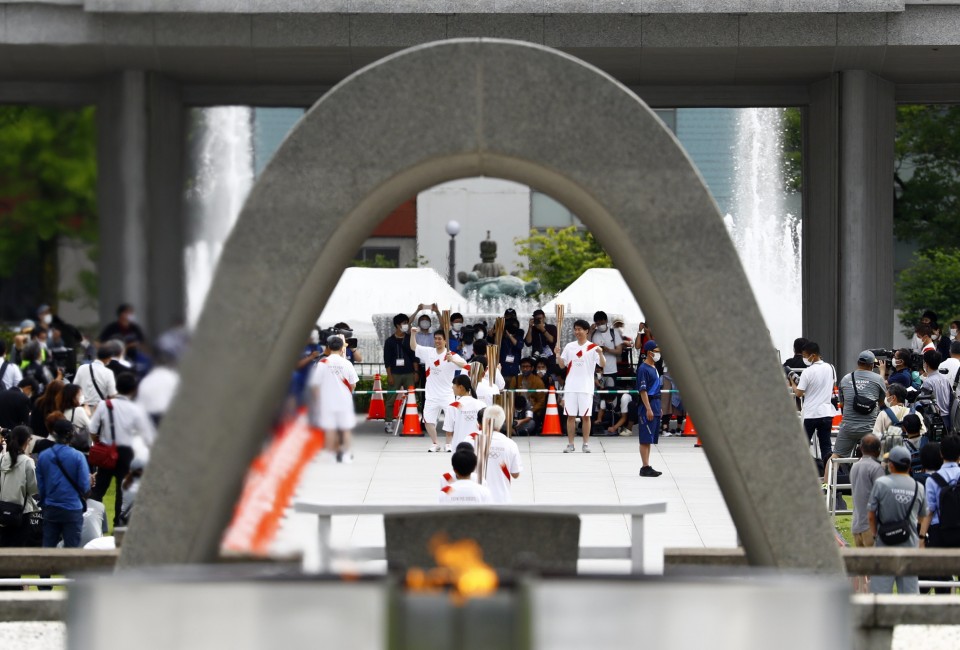 An ignition ceremony for the Tokyo Olympic torch relay is held at Peace Memorial Park in Hiroshima, western Japan, on May 17, 2021. The torch relay was taken off public roads in Hiroshima with a coronavirus state of emergency in place and spectators were not allowed at the ceremony. (Kyodo) ==Kyodo

Instead, his message was read during the evening ceremony held at the site memorializing the 1945 atomic bomb attack on the city and its aftermath, the IOC said Monday.

There were no spectators as the torch relay made its way through the Peace Memorial Park near the site of the bombing.

Hiroshima Prefecture removed the torch relay from public streets due to the coronavirus pandemic and related state of emergency declaration and replaced it with a lighting ceremony that was closed to the public.

"What better moment and what better place than the arrival of the Olympic flame in Hiroshima, your city of peace, for us to join our voices," Bach said in the message.

"From Hiroshima, the Olympic flame will carry this powerful message of peace to Tokyo and then, from Tokyo, on 23 July, to the entire world. So let us now unite the Hiroshima Peace Flame and the Olympic flame in our universal call for peace."

The Tokyo Olympic torch relay next moves to Okayama Prefecture as it continues its journey which will eventually take it across all of Japan's 47 prefectures over 121 days and reach the National Stadium in Tokyo on July 23.

Bach's visit is being rescheduled for June or later.