State-run mass COVID-19 vaccination centers opened Monday in Tokyo and Osaka, as Japan seeks to accelerate its inoculation program that has lagged far behind other developed countries with just two months until the Summer Olympics.

The centers, staffed by Self-Defense Forces doctors and nurses, will operate from 8 a.m. to 8 p.m. for three months, including weekends and national holidays. They will use the two-dose vaccine developed by U.S. biotechnology firm Moderna Inc., which was approved by the government on Friday.

Japan hopes the venues, aiming to inoculate up to 10,000 people a day in Tokyo and 5,000 in Osaka, will help meet its target to complete vaccinations by the end of July of people aged 65 or older, along with those turning 65 in the current fiscal year. 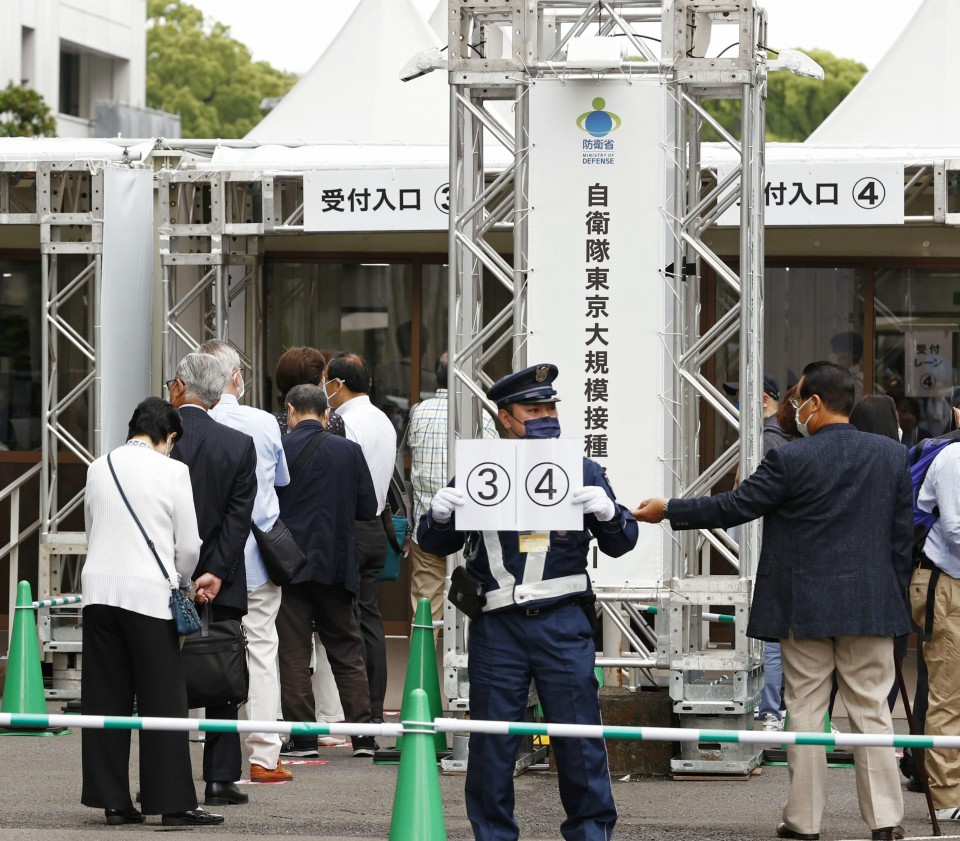 Elderly people wait in line at a large-scale coronavirus vaccination center launched by the Self-Defense Forces on May 24, 2021, in Tokyo (Kyodo)

The two populous areas, hit by a resurgence of infections, have been under a state of emergency since late April along with several other prefectures.

While new coronavirus cases reported in Osaka totaled 216 on Monday, down from 382 a week earlier, hospitals continued to be under strain.

Osaka Gov. Hirofumi Yoshimura will formally decide Tuesday to ask the central government to extend the emergency beyond its end date of May 31, sources said, while Hyogo Gov. Toshizo Ido also suggested at a press conference that an extension is necessary.

Infections in Tokyo, where the Olympics are set to begin July 23, stood at 340, down from 419 a week earlier.

Elderly people living in the capital and the neighboring prefectures of Saitama, Chiba and Kanagawa as well as in Osaka and nearby Kyoto and Hyogo prefectures are eligible for inoculations at the state-run centers, provided they have not already received a vaccine shot elsewhere.

But to avoid the reservation system becoming overwhelmed, the first week of vaccinations at the centers is restricted to residents of Tokyo's 23 wards and the city of Osaka.

At a government building in the Otemachi business district in Tokyo, 30 to 40 elderly people began gathering from around 7:30 a.m. for vaccinations.

"It did not hurt and was over quickly," said a 66-year-old woman from Suginami Ward in Tokyo. She said she decided to get a shot at the mass venue because she did not want to wait until her initially reserved first shot scheduled for late June. 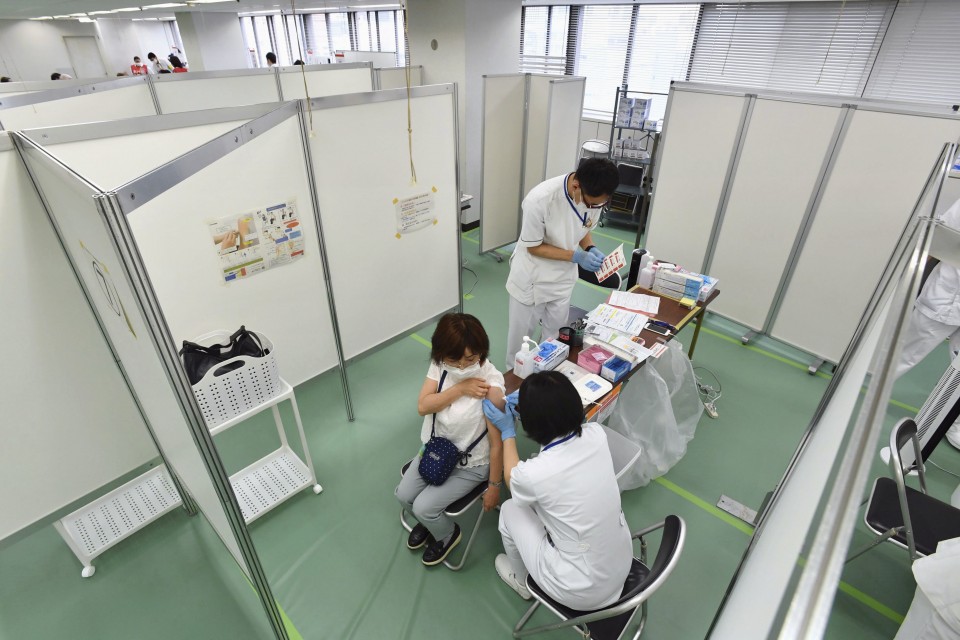 A senior citizen receives a coronavirus vaccine shot at a newly opened mass vaccination center in Tokyo on May 24, 2021. (Pool photo) (Kyodo) ==Kyodo

Visiting the venue in the afternoon, Prime Minister Yoshihide Suga said he was "relieved" to see the operation running smoothly and vowed to continue ramping up Japan's vaccine rollout.

"It is the government's responsibility to ensure every Japanese person is inoculated as soon as possible and to protect their lives and health," he told reporters.

At the Osaka International Convention Center, 69-year-old Takashi Deguchi said he chose to be inoculated after becoming tired of being tense in his daily life.

"I am worried about (side effects) but it can't be helped. I received the shot just like getting an influenza vaccine," he said.

The slots -- 49,000 at the Tokyo site and 24,500 at the Osaka venue -- were quickly filled after the Defense Ministry started accepting reservations on May 17 on its website and via the Line messaging app.

Online bookings for elderly people living in the rest of Tokyo and Osaka Prefecture also started Monday for slots in the week through June 6.

Reservations for all 35,000 slots at the Osaka center filled up roughly 30 minutes after the booking process began at 1 p.m., while 24,000 of the 70,000 available slots at the Tokyo venue were taken in the six hours after the process opened at 11 a.m.

Some local governments plan to set up their own large vaccination sites for elderly people. The prefectures of Aichi, Gunma and Miyagi opened their venues Monday, aiming to inoculate each day up to 3,000, 1,000 and 2,100 people, respectively.

Baseball stadiums are also being floated as potential venues. Yomiuri Giants owner Toshikazu Yamaguchi on Sunday briefed Suga on a plan to use Tokyo Dome from August, while Aichi Gov. Hideaki Omura told a press conference on Monday he may take up an offer to utilize Vantelin Dome Nagoya.

Japan's vaccination program started in February with health care workers and later expanded to the elderly, the latter group totaling about 36 million people. But only around 4 percent of the country's population of 126 million has received at least one dose.

The inoculations have been conducted by local governments using the two-dose vaccine developed by U.S. pharmaceutical company Pfizer Inc. and its German partner BioNTech SE.

U.S. drugmaker Johnson & Johnson said Monday one of its units has filed for approval from Japan's Ministry of Health, Labor and Welfare for its one-dose vaccine, with possible delivery in early 2022.

Some SDF doctors and nurses as well as private nurses who run the vaccination centers in Tokyo and Osaka became the first recipients of Moderna shots in Japan on Sunday, the Defense Ministry said.

Even if the two state-run venues operate at full capacity for the scheduled three months, only 900,000 in Tokyo and 450,000 in Osaka will be able to complete vaccinations, around 10 percent of the targeted elderly population.