After the Japanese government's second state of emergency over the coronavirus pandemic led the country's economy to its first shrinkage in three quarters in the January-March period, the third emergency declared in April could bring another contraction the following quarter, economists say.

Given its extension and the repeated expansion of the areas covered by the ongoing emergency declaration, some analysts predict Japan will see a technical recession, typically defined as two consecutive quarters of contraction, in the first half of 2021, slipping into a double-dip recession.

After the initial shock of the pandemic led to the worst-ever quarterly shrinkage -- an annualized 28.6 percent in the April-June period in 2020 -- the Japanese economy recovered strongly for two straight quarters through December, boosted by a rebound in private consumption and brisk exports. 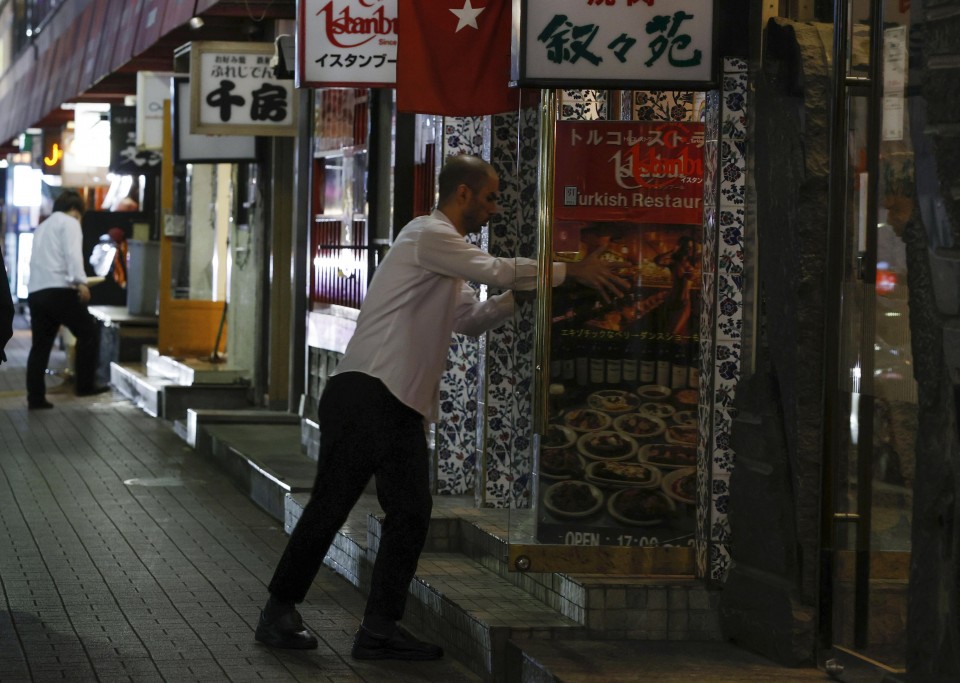 The lights are turned off at most restaurants in Tokyo's Ginza area on Jan. 9, 2021, under the second coronavirus state of emergency. (Kyodo) ==Kyodo

The latest Cabinet Office data released Tuesday show the recovery stalled as the gross domestic product shrank an annualized real 5.1 percent in the first quarter of 2021 from the previous quarter due to the second virus emergency declared in early January.

Just about a month after the second emergency was fully lifted in late March, a third one was declared on April 25 for Tokyo as well as the western prefectures of Kyoto, Osaka and Hyogo, which serve as a regional economic hub, as these areas faced a fourth wave of virus infections triggered by highly contagious variants.

It entailed stricter and broader virus prevention steps than the second emergency, requesting not only alcohol-serving establishments but also major commercial facilities such as department stores to close temporarily.

Prime Minister Yoshihide Suga had initially intended to lift the emergency on May 11, but as the number of daily new infection cases showed no sign of trending downward during the Golden Week holidays through early May, he decided to extend it to May 31, and to expand it to six prefectures, including Aichi and Fukuoka.

On Sunday, the government further expanded the emergency to Hokkaido, Hiroshima and Okayama prefectures, while a quasi-state of emergency, with less strict restrictions, is now in place in 10 prefectures, up from seven.

"It's getting more likely that the real GDP will slightly contract in the April-June period as it did in the January-March period," said Takahide Kiuchi, executive economist at the Nomura Research Institute. 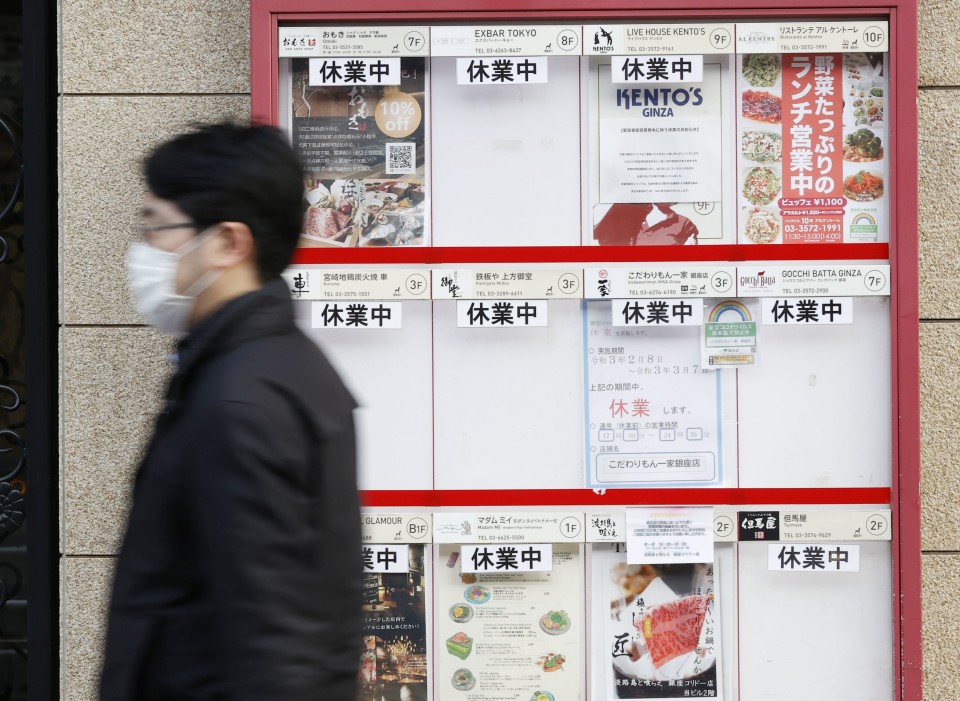 A directory board showing that most shops in the building are closed is pictured in Tokyo's Ginza on February 13, 2021, when the capital was under a state of emergency for the second time amid the coronavirus pandemic. (Kyodo)

Kiuchi estimates that the current virus emergency will reduce consumption by about 1.9 trillion yen ($17 billion) and that could suppress the GDP growth in April-June by over 5 percent in annualized terms.

The recent government decisions on the emergency duration and coverage areas further cloud the outlook for the world's third-largest economy.

According to a survey released on Thursday by the Japan Center for Economic Research, 37 private-sector think tanks forecast an average GDP growth of an annualized 1.84 percent in 2021's second quarter, far worse than the 5.63 percent rise projected a month ago.

Of the 37, seven predicted GDP will shrink, while two forecast zero growth.

During the previous emergency declarations, the government repeatedly extended the end date and expanded their target areas after failing to curb the virus spread sufficiently.

The first virus emergency, which resulted in the economy having its worst contraction on record in the April-June period in 2020, was expanded to the nation's 47 prefectures from an initial seven, nine days after its declaration on April 7.

Kiuchi said the possibility has grown that the ongoing declaration will cover the whole nation as the first one did, and it could be extended for about three weeks beyond May 31. "In that case, the GDP in the current April-June period could possibly see a double-digit percentage shrinkage."

Hideo Kumano, chief economist at the Dai-ichi Life Research Institute, said he believes that the government will lift and issue emergency steps one or two more times, given the country's sluggish vaccine rollout.

A recent University of Oxford tally showed that Japan, which began inoculating in mid-February, has administered at least one shot to just around 3 percent of its entire population of about 126 million, far below the world average of roughly 9 percent.

The government aims to fully vaccinate seniors aged 65 or older, which account for nearly 30 percent of its population, by the end of July, and to administer 1 million shots per day, more than triple the current pace.

Even if the government ramps the pace up to 1 million shots per day, it would be mid-December before every person in the country aged 16 and older has received two shots, according to Kumano.

"Many firms in the service sectors such as restaurants, hotels and transportation operators wouldn't be able to survive until the end of this year and will go bankrupt one after another," Kumano said.

Exports on the back of a firm global recovery could be a saving grace for Japan's economy, but Saisuke Sakai, a senior economist at Mizuho Research & Technologies, cites the global semiconductor shortage as a risk factor potentially putting a further restraint on the country's car production and exports.

A fire in March at a plant belonging to the world's leading auto chip supplier Renesas Electronics Corp. in eastern Japan also dealt a significant blow to major Japanese carmakers, some of which have been forced to announce production cuts.

In the current quarter, car output is estimated to be reduced by about 500,000 to 600,000 units, possibly pushing down the nation's GDP by an annualized 1.5 percent or so, according to Sakai.

"Decreases in domestic auto sales and exports threaten to put downward pressure on the Japanese economy from April to June," Sakai said.