The Japanese government is considering mobilizing doctors and nurses from the Self-Defense Forces at this summer's Tokyo Olympics and Paralympics, Defense Minister Nobuo Kishi said Tuesday, amid fears that the sporting event under current pandemic conditions could sap medical resources seriously needed by the public.

Kishi told a parliamentary committee that the ministry has received a request from the Tokyo Games organizing committee, which has been trying to secure enough medical personnel to ensure the safety of athletes and assisting staff. 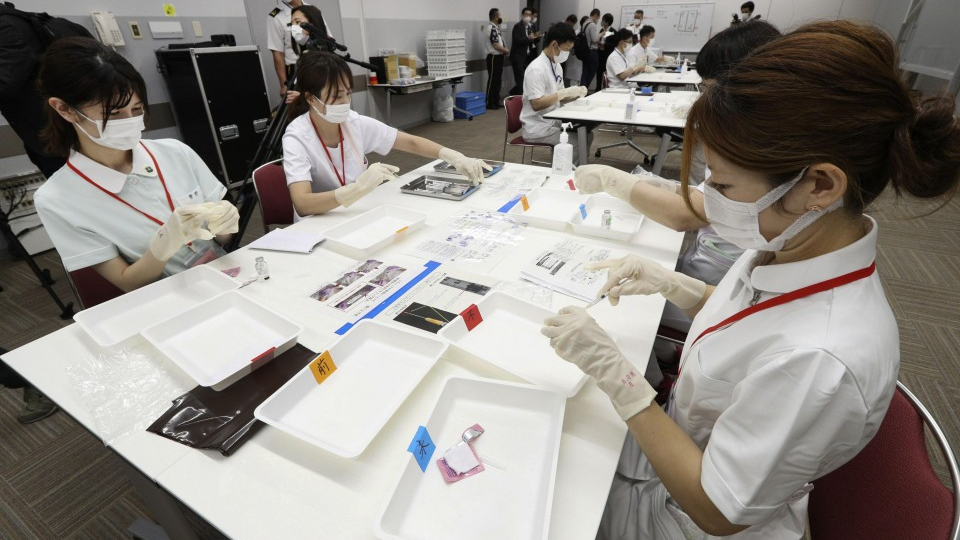 A rehearsal is held at the Osaka International Convention Center on May 21, 2021, for large-scale COVID-19 vaccinations to be administered by Self-Defense Forces doctors and nurses targeting senior citizens and beginning May 24. (Pool photo) (Kyodo) ==Kyodo

"We would like to coordinate so that we can support both the Olympics and the operation of (vaccination) centers," Kishi said, while addressing a question from an opposition lawmaker.

With just two months to go to the opening of the Olympics, state-run mass COVID-19 vaccination centers, operated by SDF doctors and nurses, opened Monday in Tokyo and Osaka as part of efforts to speed up Japan's inoculation program, which has lagged far behind those of other developed countries.

Seiko Hashimoto, president of the organizing committee, told a press conference Friday that as many as 230 doctors and 310 nurses will be needed per day during the games, adding that about 80 percent of the required numbers have been secured.

The government and the committee have repeatedly said the Tokyo Olympics and Paralympics can be held safely in Japan, which has been struggling to tame a fourth wave of infections that has placed huge strain on the country's medical system.

While the Olympics and Paralympics will not be held with spectators from overseas, they will involve some 15,000 athletes from around the world, and as many as 78,000 non-athletes from abroad, including members of national Olympic committees, international sports federations and members of the media.

Japan's Olympic minister Tamayo Marukawa told a press conference on Tuesday that a plan to use a smartphone app with GPS tracking for games-related foreign visitors has been abandoned due to the development schedule and privacy reasons, but that the GPS function on smartphones will be used to track the whereabouts in Japan of those who test positive for the virus.

Marukawa also said about 20,000 vaccines from Pfizer Inc. will be provided for free to Japanese athletes competing in the Tokyo Games, as well as some staff members, including interpreters and referees.

"We will coordinate so that staff members who come into frequent contact with athletes from different countries will also be vaccinated," she said.

The organizing committee will likely play a central role in selecting the officials and workers to be vaccinated, but it is undecided when or where they will receive the shots, she said.

About 2,500 members of Japan's Olympic and Paralympic delegations are estimated to need COVID-19 vaccines. They will likely be inoculated around early June at Tokyo's National Training Center.

Meanwhile, securing enough medical staff who can administer the shots to a large number of officials and workers before the Olympics open on July 23 is expected to be a challenge.

On Tuesday, Hashimoto told reporters in Tokyo that vaccinations for officials will begin as soon as possible, but did not reveal a specific time frame.

"We will do our best to make use (of the vaccines) to ensure the safety and security to everyone who will come from abroad and the Japanese people," she said.

The International Olympic Committee said earlier this month that vaccines developed by Pfizer and its German partner BioNTech SE will be provided to Tokyo Games athletes. It expects over 80 percent of the residents of the athletes' village to be inoculated.

Hashimoto also visited a 15-hectare vacant lot where Tokyo's famed Tsukiji fish market used to be located, which will be used as a major transportation hub for the Olympics and Paralympics.

Countless vehicles have already been brought to the site, equipped with fuel dispensers and car wash equipment. About 2,000 buses have been secured to transport athletes and others, while the organizing body will receive some 2,700 cars on lease from Toyota Motor Corp., one of the top sponsors of the IOC.

"Transportation will start in early July. We must prepare steadily and allow the games to succeed," Hashimoto said. 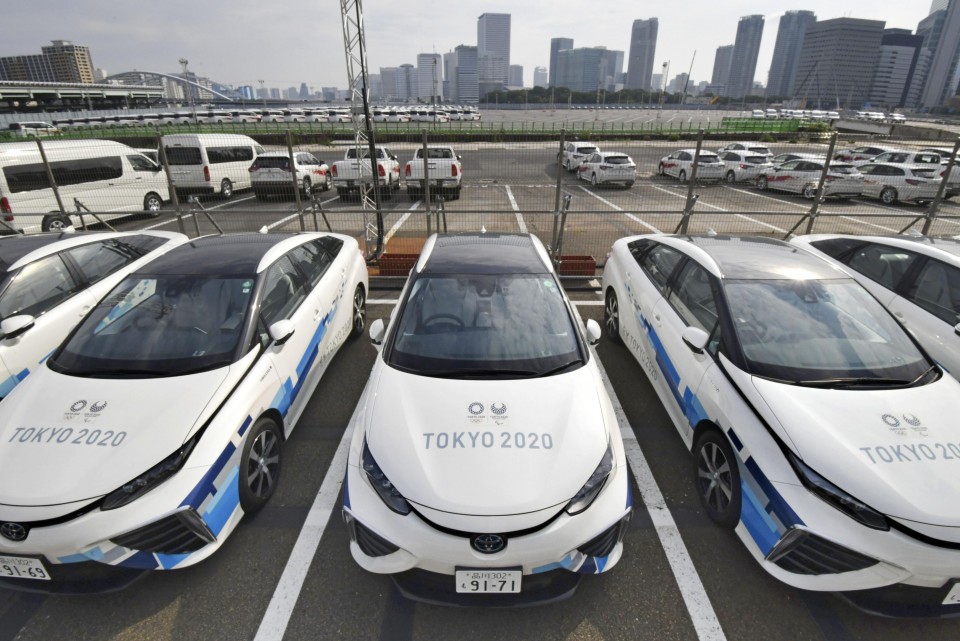 Photo taken on May 25, 2021, shows cars parked at a transportation hub in Tokyo for the Summer Olympics and Paralympics. (Pool photo)(Kyodo)