The Tokyo Olympics can be held this summer even if the Japanese capital is under a coronavirus state of emergency due to a spike in infections, a top official of the International Olympic Committee said Friday, amid nagging concerns over whether they can proceed safely during a global health crisis.

"The answer is absolutely yes," John Coates, an IOC vice president, told a remote press conference when asked whether the Tokyo Games can be delivered under the emergency, citing advice on anti-virus measures from the World Health Organization and how Japan "successfully" conducted test events recently. 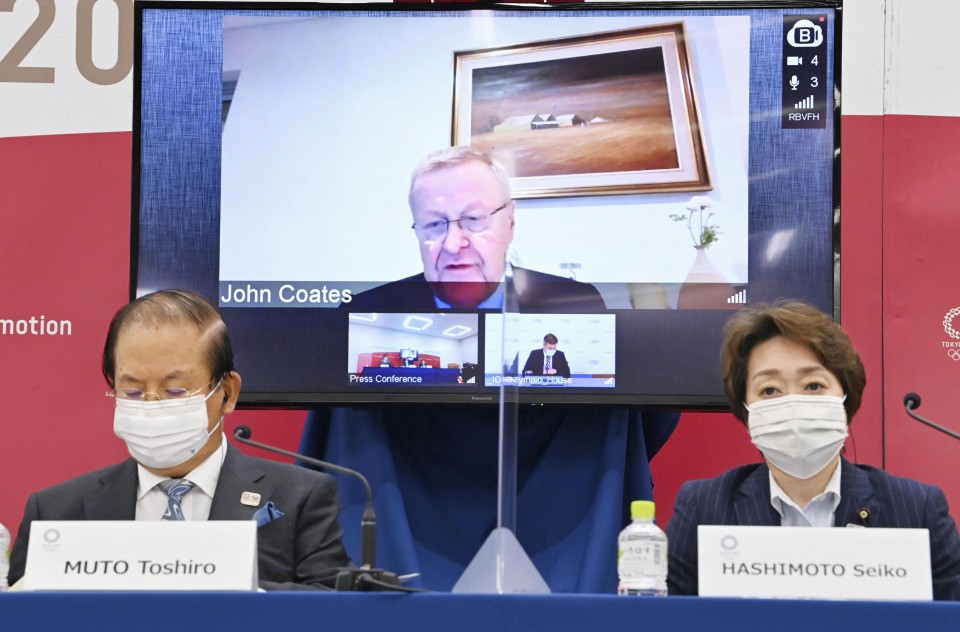 John Coates, head of the International Olympic Committee's coordination commission, seen on the video screen, speaks during a press conference on May 21, 2021, with Seiko Hashimoto (R), president of the Tokyo Olympic and Paralympic organizing committee, and Toshiro Muto (L), CEO of the committee, listening in Tokyo. (Pool photo) (Kyodo) ==Kyodo

Upon the conclusion of a three-day remote meeting with the IOC, Seiko Hashimoto, president of the Tokyo organizing body, said as many as 230 doctors and 310 nurses will be needed per day during the games, adding about 80 percent of the medical workers have been secured.

With around 15,000 athletes competing at the Olympics and Paralympics, Hashimoto said the number of overseas officials and workers will be reduced to 78,000, less than half the initial figure, as part of efforts to prevent the spread of the virus.

Of the 78,000 non-athletes, 59,000, including IOC officials and press members, are expected to be involved with the Olympics, she said.

In a bid to reassure the skeptical Japanese public, the organizers will implement what she calls the "three thoroughs," which comprise a sharp cut in the number of people from abroad, strict restrictions on the behavior of participants and a full-blown review of the medical system.

Under the scheme, the head of the organizing body said between 50,000 and 60,000 tests per day are expected to be conducted on athletes and workers of the games.

The Japanese organizers and the IOC's Coordination Commission, which oversees the preparations for the games, held their 11th and final meeting before the Olympics open on July 23 following an unprecedented one-year postponement.

"After nearly eight years of hard work and planning, the finish line is within touching distance," said Coates, head of the IOC commission. "We will continue to work hand in hand with our Japanese partners to do everything possible to deliver a safe and secure games for everyone."

With just two months remaining until the opening of the Olympics, however, the organizers have faced growing public concerns that staging the global sporting event in the middle of the coronavirus pandemic could further overstretch Japan's health care system.

Since late April, Tokyo and some other areas in the country have been under a third COVID-19 state of emergency, which calls for people to refrain from making unnecessary outings. While the measure is scheduled to end on May 31, experts have called for another extension as the situation has not drastically improved.

The vaccination rollout has been extremely slow in Japan, and the majority of people in the country will not be inoculated in time for the Olympics.

Coates said unfavorable public opinions over the games are a "correlation" with the low vaccination rate, though he expects they will improve when more people are vaccinated.

"But if it doesn't (improve), then our position is that we just have to make sure we get on with our job, and our job is to ensure these games are safe for all participants and all of the people in Japan who might come into contact with the participants," he said.

Still, Japan's top government COVID-19 adviser said Friday that the organizers must decide whether to go ahead with the games after scrutinizing their potential impact on the country's medical system.

The call from Shigeru Omi, an infectious disease expert who heads a government subcommittee on the coronavirus, came as another wave of infections, driven by mutated variants, has caused a shortage of hospital beds and medical staff in some Japanese areas.

While addressing a question from an opposition lawmaker in a parliamentary committee session, he said it is the "responsibility" of the organizers to determine if Japan can actually host the Olympics and Paralympics, adding, "The decision cannot be made at the last minute."

A number of national teams have already abandoned plans to train in Japan ahead of the Olympics due to safety concerns.

The government said Friday that 59 municipalities across Japan had given up on plans to host athletes for pre-Olympic training camps and cultural exchanges.

As of the end of April, a total of 528 municipalities had registered to welcome athletes from 184 countries and regions in the government's "Host Town" program for the Olympics and Paralympics.