Shuri Castle, a symbol of Okinawa located at a UNESCO World Heritage site that burned down in the southern Japan prefecture in 2019, has been recreated in miniature form at a theme park in Nikko, a popular tourist spot north of Tokyo.

The 1:25 scale replica of the castle, which is currently being reconstructed, has been on display since April 24 at Tobu World Square that features models of world-famous landmarks. 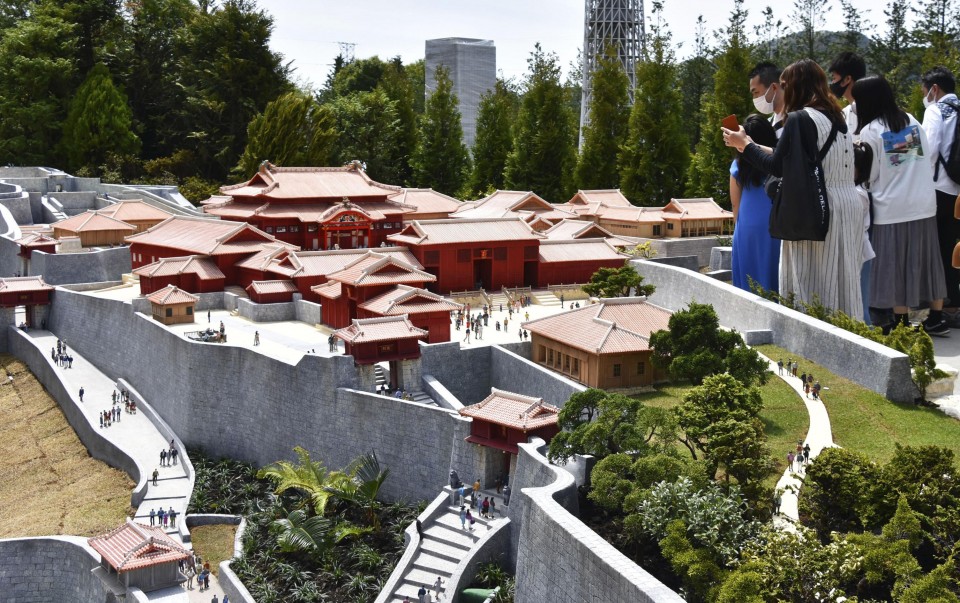 A one-25th scale replica of Shuri Castle in Okinawa Prefecture goes on public display at the Tobu World Square theme park in Nikko in Tochigi Prefecture, eastern Japan, on April 24, 2021. The World Heritage-listed castle, hit by a massive fire in 2019, was added to items of the park, featuring miniature replicas of world-famous landmarks. (Kyodo) ==Kyodo

On public display are 24 replica buildings, including a 62-centimeter-high Seiden main hall and a 44-cm-high Nanden south hall, in a 120-square-meter space at the park in the popular Kinugawa hot spring resort area in Nikko, Tochigi Prefecture.

Hundreds of dolls have also been placed to replicate the New Year rituals of the Ryukyu Kingdom, as Shuri Castle was the center of the kingdom's politics, foreign affairs and culture from 1429 until the southern island was annexed by Japan in 1879.

The miniature reproduction of Shuri Castle, made possible with the cooperation of the Okinawa prefectural government and the heritage site, had been scheduled to go on public display last year, but it was delayed due to the coronavirus pandemic.

The replica is based on a castle blueprint used during past restoration work.

Yukio Nemoto, general manager of Tobu World Square, said there had been many requests from visitors for the addition of a model of the castle.

"It's a difficult time for tourist spots such as Nikko and Okinawa due to the coronavirus, but we want to cheer people up" with this display, Nemoto said.

Kazuya Ito, a 40-year-old man from Kawagoe in Saitama Prefecture near Tokyo, who was visiting with his family, said, "This is the first time I have learned that the entire castle was shaped like this." 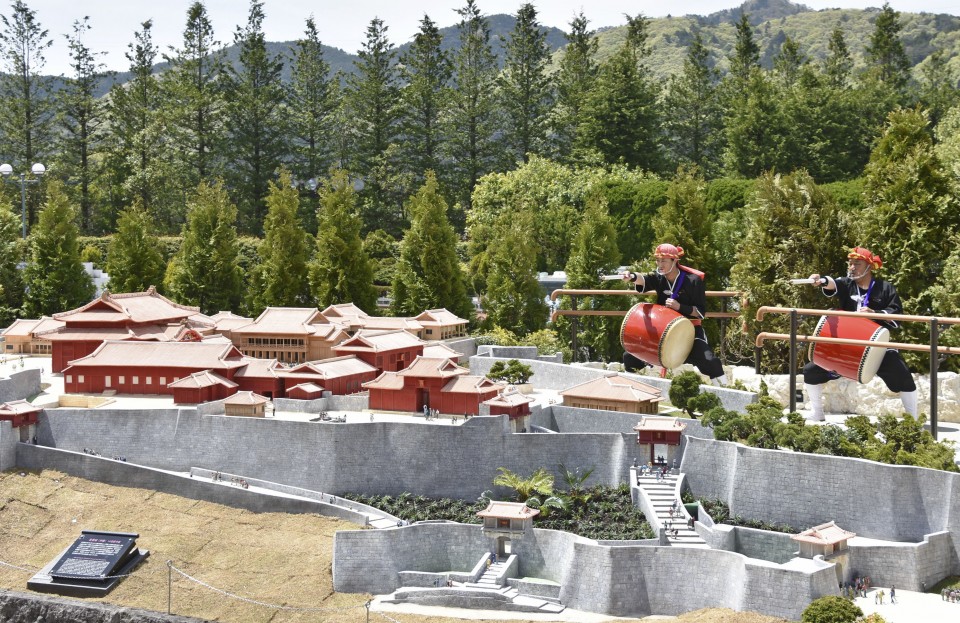 "The building is important for people in Okinawa. I hope this will lead to support for the restoration of the castle," said Ito.

The castle has burned down several times, including during the Battle of Okinawa at the end of World War II, and the original castle ruins, excluding restored buildings, were registered as a U.N. Educational, Scientific and Cultural Organization World Heritage site in 2000.

The 2019 fire destroyed a large portion of the compound including the main buildings.

The Japanese government has said it aims to restore the Seiden hall by 2026 after embarking on full-fledged reconstruction in 2022.

Since its opening in 1993, Tobu World Square has been displaying the Shureimon gate of the castle. It had considered the entire castle compound as a candidate for display before the fire.

Tobu World Square is an outdoor theme park with reproductions of world-famous buildings and structures on a 1:25 scale, including the Pyramids and the Sphinx in Egypt, the Statue of Liberty in New York and the Forbidden City in Beijing.