The Tokyo Olympic torch relay began its segment in Hiroshima on Monday, but the event was downscaled with torchbearers passing on the flame at a park without spectators in the prefecture, which is under an emergency over surging coronavirus infections.

The torchbearers gathered at the western Japan city's Peace Memorial Park near the epicenter of the 1945 U.S. atomic bombing in World War II, as local organizers decided not to use public roads for the relay throughout the two-day event. 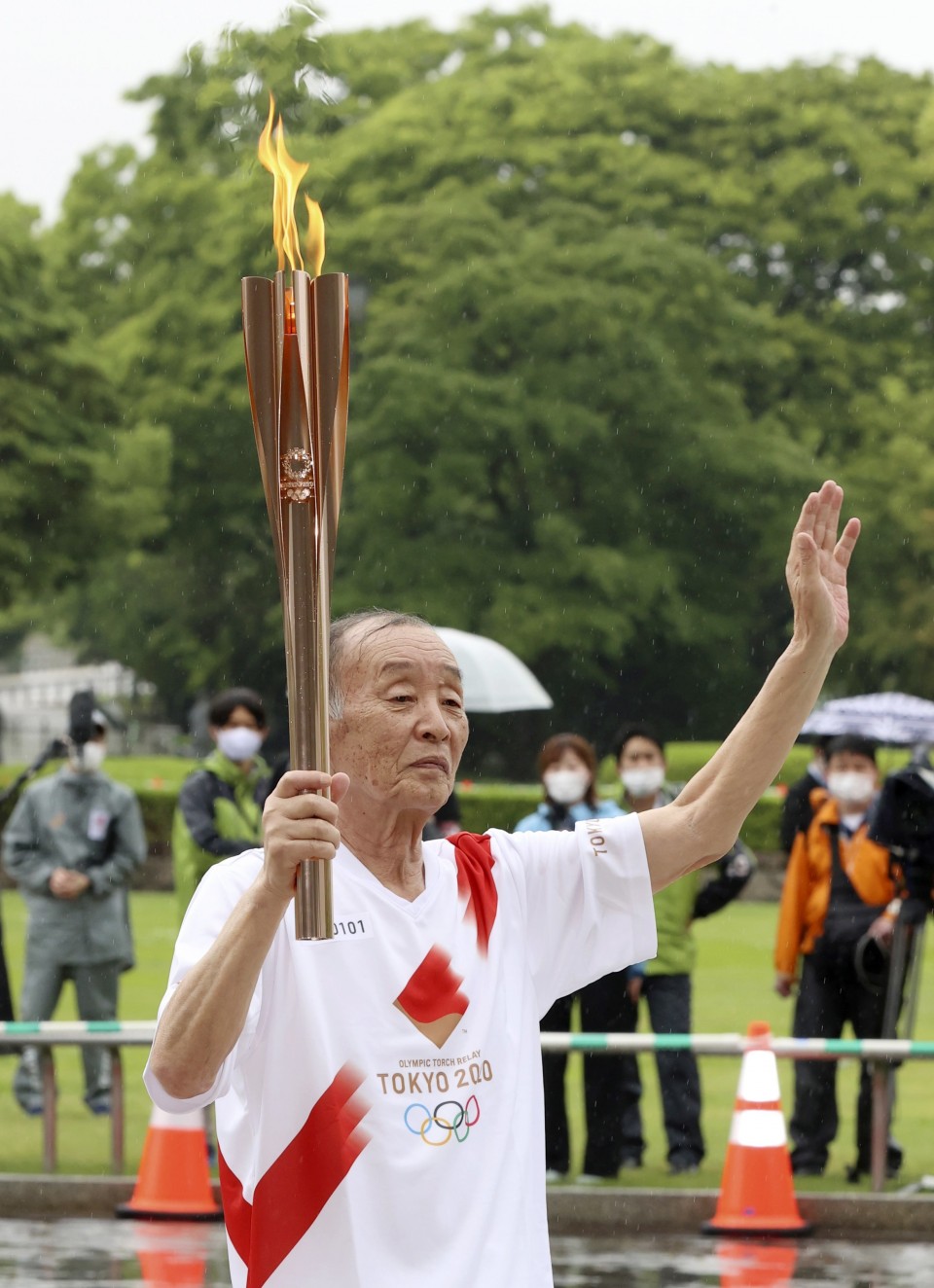 On the first day of the event, Takayuki Sakai, a younger brother of Yoshinori Sakai, who lit the cauldron at the opening ceremony of the 1964 Tokyo Olympics, was among those who carried the flame at the park.

Before the ceremony, the 74-year-old torchbearer told Kyodo News, "I want to get involved in the Olympics instead of my late brother," who was looking forward to running the relay leg in the Summer Games in 2020.

Yoshinori Sakai, or "Atomic Bomb Boy," who was born in Hiroshima Prefecture on the day the atomic bomb was dropped on the city on Aug. 6, 1945, died in 2014, a year after Tokyo won the bid to host the Olympics again.

"Even though the relay was held in a different form, I passed on the flame together with my brother, wishing for world peace and recovery from the (rain) disasters" that hit Hiroshima in recent years, Takayuki Sakai said.

Meanwhile, several runners initially slated to run in the prefecture including Shoji Tomihisa, a 104-year-old atomic bomb survivor, and Kanae Minato, a 48-year-old novelist, canceled their participation in the event amid a rapid resurgence of infections in the country.

With less than 70 days until the Tokyo Olympics, the latest uptick in coronavirus cases has seen some areas such as Fukuoka Prefecture in Japan's southwest move their relay legs off public roads and onto alternative courses away from crowds.

The western Japan prefectures of Okayama and Hyogo have also decided that their torch relay legs scheduled for later this month on public roads will be called off. The two areas are currently under the state of emergency over the pandemic along with Tokyo, Osaka, Kyoto, Aichi, Fukuoka, Hiroshima and Hokkaido.

Olympic torch relay to be taken off public roads in Okayama, Hyogo

Marathoner Yuko Arimori, 54, who took silver at the 1992 Barcelona Games and bronze in Atlanta four years later, has canceled her participation in the scaled-down Okayama leg of the relay due to the virus spread, according to the prefectural government. She is a native of the western Japan prefecture.

The nationwide torch relay kicked off on March 25 in Fukushima Prefecture, but the organizers scaled back the event in some areas as it could potentially draw crowds.

The Tokyo Olympics were postponed for one year to start in July due to the coronavirus pandemic.