A series of explosions, including at least one that was set off by a parcel bomb, killed five people in the central Bago region, local media reported Tuesday, adding one of the dead is a local council member of the ousted National League for Democracy party led by Aung San Suu Kyi.

According to the online media "Myanmar Now," there were a total of three explosions Monday afternoon. Three police officers who had joined a civil disobedience movement in opposition to February's military coup were among those killed. 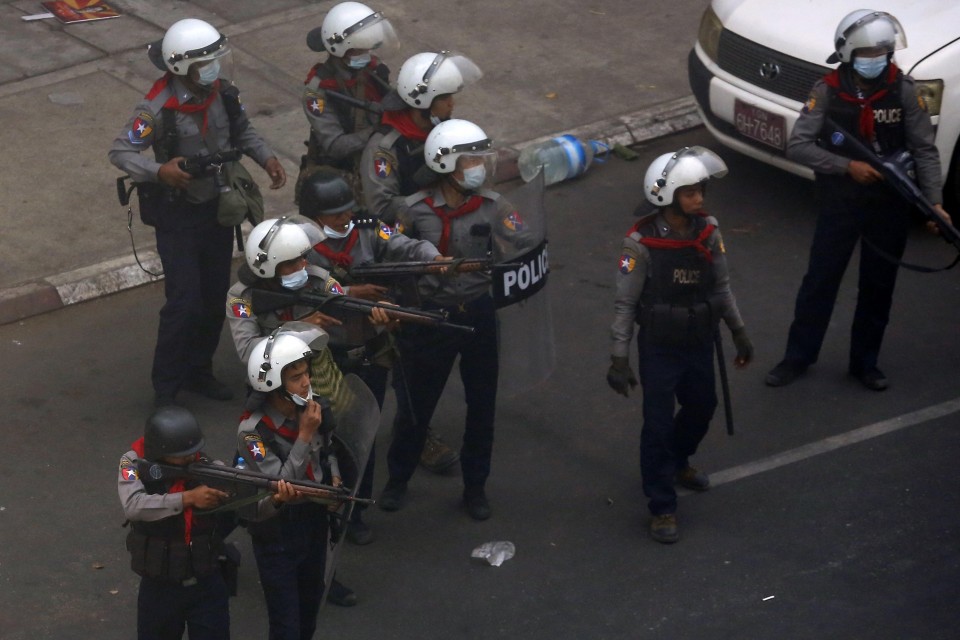 Riot police aim guns towards protesters during a violent crackdown on demonstrators against the military coup in Yangon, Myanmar on Feb. 28. 2021. (NurPhoto/Getty/Kyodo)

Parliamentarians and police officers were staying in villages in the Bago region to escape the violent crackdowns on protests by the armed forces.

A villager who had taken in the officers was also killed, and another police officer was seriously injured, according to the media report.

Saturday marked three months since the Feb. 1 military coup that ousted the elected government led by Suu Kyi. People calling for democracy have continued their protests against the coup in various forms, including a so-called civil disobedience movement to boycott work.

Due to authorities' strengthened crackdowns and willingness to use deadly force, large-scale demonstrations, in which millions of people participated, have lost considerable momentum, virtually disappearing.

As of Monday, 766 people have been killed and 3,614 arrested, charged or sentenced by the junta, according to the Assistance Association for Political Prisoners, a rights group monitoring the situation in Myanmar.