Myanmar's ousted leader Aung San Suu Kyi, accused of a number of criminal offenses, appeared in court in person Monday for the first time since the military seized control and detained her almost three months ago, one of the lawyers told reporters.

Later in the day, state-run television aired a photo of Suu Kyi in court, marking the first time that a photo showing her has been released by junta-controlled media since the Feb. 1 coup.

Suu Kyi, who was also allowed to meet the lawyers for the first time, said, "I am always praying for the wellness of all the people" in Myanmar and her party, the National League for Democracy, "will exist as long as the people are there because it has been founded for the people," according to lawyer Min Min Soe. 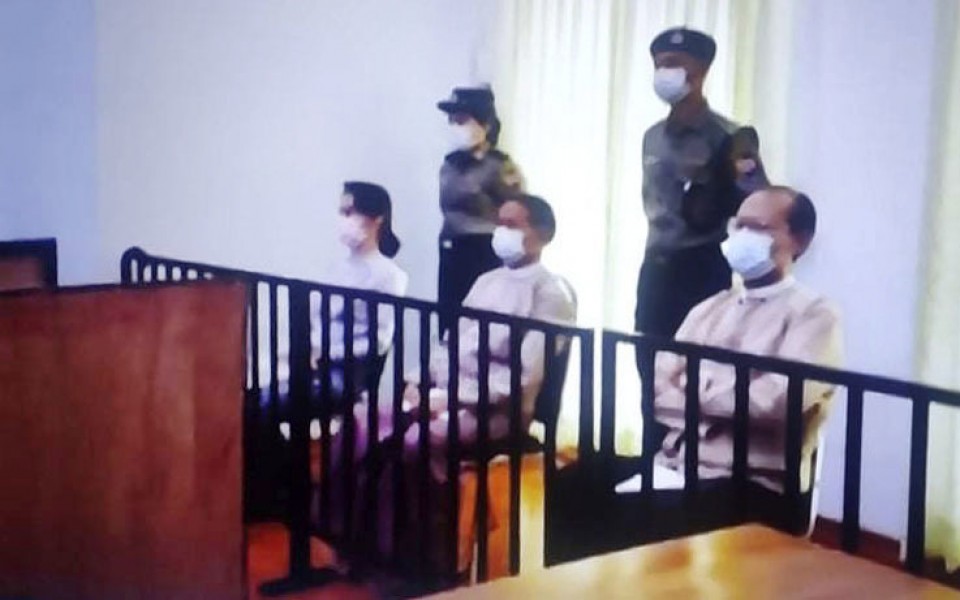 Myanmar's ousted leader Aung San Suu Kyi (L), accused of a number of criminal offenses, appeares in court in person for the first time on May 24, 2021 since the military detained her following the Feb. 1 coup.(Screenshot from state-run TV)(Kyodo)

Min Min Soe and four other lawyers met Suu Kyi at a room of a court in the capital Naypyitaw for 30 minutes, the lawyer said. After the meeting, Suu Kyi and the lawyers attended a court session held at another facility set up as a special court.

But the judge did not ask any questions to Suu Kyi, telling her and the lawyers that her cases will be discussed at the next court session scheduled on June 7, according to the lawyer.

Suu Kyi attended hearings at the Naypyitaw court via videoconferencing in March and April. She has faced several charges at the court, including illegally importing walkie-talkies, flouting coronavirus restrictions and spreading information that fanned social unrest.

Suu Kyi was separately charged at a Yangon court with violating the country's colonial-era Official Secrets Act. The charge, which is related to the indictment of Australian economist Sean Turnell, a former adviser to Suu Kyi, is punishable by up to 14 years in prison.

Min Min Soe also said Win Myint, deposed president of the government led by Suu Kyi as state counsellor, was also allowed to meet his lawyers on Monday. He is charged with flouting coronavirus restrictions too.

Suu Kyi to appear in court on May 24: lawyer

Myanmar junta to reopen schools despite protests from teachers