Rui Hachimura marked his 100th NBA game with a 27-point outburst Monday, leading the Washington Wizards in scoring in a 154-141 victory over the Indiana Pacers that could impact the playoff race.

The second-year forward shot 12-for-19 from the floor in 31 minutes at Washington's Capital One Arena to help the 10th-place Wizards improve to 30-35 and move within half a game of the ninth-place Pacers in the Eastern Conference standings. 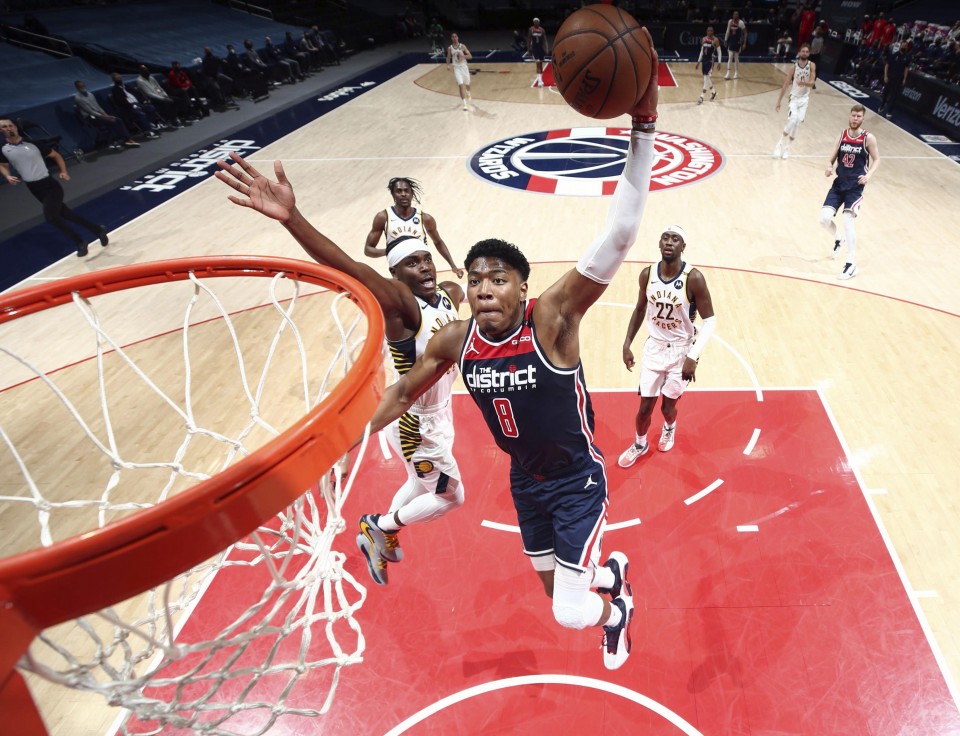 Rui Hachimura (8) of the Washington Wizards dunks the ball during a game against the Indiana Pacers on May 3, 2021, in Washington. (Copyright 2021 NBAE)(NBAE/Getty/Kyodo)

Hachimura grabbed seven rebounds and threw down several big dunks as he continued his streak of double-digit scoring in every game since returning on April 26 from a four-game absence due to a sore left knee.

His Washington teammate Russell Westbrook recorded his league-leading 32nd triple-double of the season, scoring 14 points to go along with 21 rebounds and 24 assists -- just the third game in NBA history with 20-plus rebounds and 20-plus assists, according to NBA.com.

All-Star guard Bradley Beal contributed 26 points for the Wizards, who amassed their highest points total for the season.

"We're just trying to make the playoffs right now. We lost a tough one last game so we had to come back with a good energy tonight," said Hachimura, who scored 18 in a 125-124 road loss to the Dallas Mavericks on Saturday.

"Defensively, we made a lot of mistakes, but on the offensive side we almost scored 160. We still don't know (about the playoffs), so we've just got to keep rolling. Every game is very important for us."

Domantas Sabonis had 32 points and 20 rebounds, while Caris LeVert scored 33 points for the Pacers.

Teams finishing between seventh and 10th will enter the NBA's new playoffs play-in tournament. With two wins over the Pacers this season, the Wizards hold the tie-breaker should the teams finish with the same record.

Basketball: Rui Hachimura returns from injury in loss for Wizards