Key members of Japan's Defense Ministry and troops were wary in 2011 that the U.S. military would take control of the response to the nuclear crisis at the Fukushima Daiichi complex, according to the former head of the Joint Staff and others involved.

The latest accounts by current and former Defense Ministry officials and Self-Defense Forces members laid bare heightened tensions between the allies over the initial response to the worst nuclear crisis since Chernobyl.

Rescue and relief operations following the 2011 earthquake and tsunami dubbed "Operation Tomodachi" are now widely known in Japan as having symbolized the strength of the bilateral alliance. 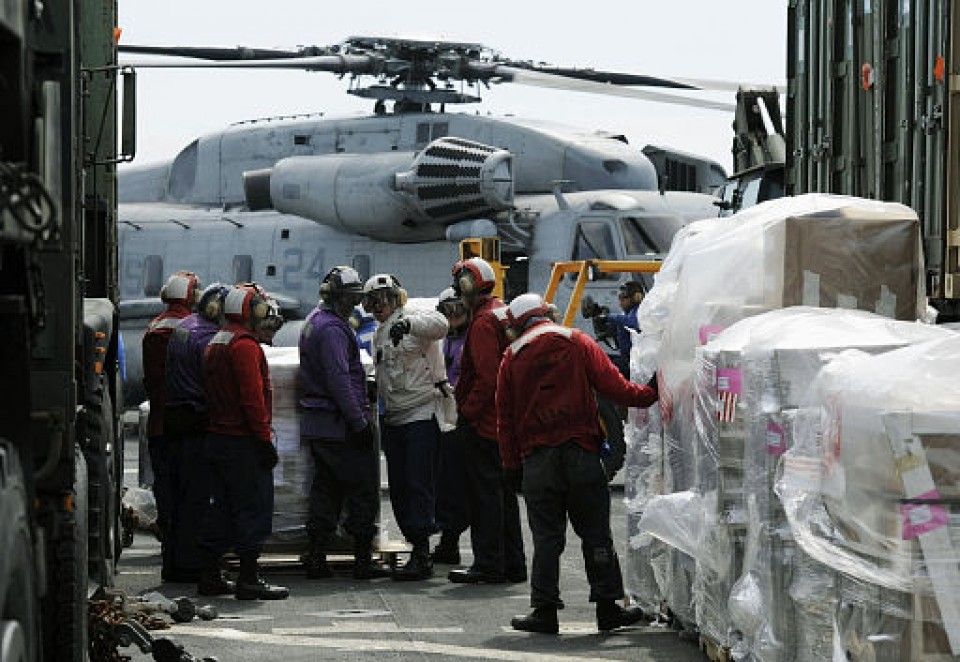 U.S. military personnel transport relief goods to a helicopter from a U.S. naval vessel on March 29, 2011 in the Pacific off the Sanriku coast, northeastern Japan. (Kyodo)

The U.S. military's move to form a joint support force led by the commander of the Pacific Fleet had triggered anxiety over the extent of Japan's control in the run-up to its launch in March 2011, according to the accounts.

"The SDF is a symbol of sovereignty. We wanted to avoid a relationship in which the United States would take control and Japan would only follow (the United States)," Ryoichi Oriki, former chief of the Joint Staff told Kyodo News.

The U.S. military told the SDF on March 18, 2011 about the formation of a joint support force involving the army, navy, air force and Marine Corps and the commander of the Pacific Fleet would take the leadership, according to the accounts.

Bilateral coordination continued until March 24 when the joint support force was set up for the first time in Japan.

"We were beginning to feel we could work well with U.S. forces in Japan so (the formation of the joint support force) was quite surprising," said Koichi Isobe, who supported Oriki as head of the planning and policy division of the Joint Staff.

The SDF normally communicates with U.S. forces in Japan instead of the Pacific Fleet based in Hawaii.

Frustration had grown over the lack of information provided by Japan about the status of the nuclear reactors at the Fukushima plant.

Against such a backdrop, the joint support force was set up primarily to provide humanitarian assistance, cooperate in responding to the nuclear disaster, and protect U.S. citizens in Japan, according to Isobe.

The handling of the Fukushima crisis by the government led by the then Democratic Party of Japan sparked criticism at home, including its initial response and provision of updates on the situation at the power plant that suffered triple meltdowns.

"There was a sense of bewilderment that the United States had given up leaving it up to Japan because information-sharing was not done accordingly," a senior Defense Ministry official said.

Despite worries about the U.S. military exerting control over the SDF, the joint support force did not have that authority, with one senior Defense Ministry official saying that the U.S. side was being careful not to be seen as "placing the SDF under its control."

The SDF and the U.S. military have been enhancing their interoperability based on the long-time security alliance. Operation Tomodachi, named with the Japanese word "friend," involved a total of 16,000 personnel, including nuclear experts dispatched by the U.S. military.

Oriki said the first joint operation of such a large scale was meaningful in showcasing the strength of the bilateral alliance and in terms of deterrence.

"It should be highly appreciated that (the U.S. side) provided knowledge about nuclear power" to the Japanese government and plant operator Tokyo Electric Power Company Holdings Inc., Oriki said.

TEPCO plans to decommission the Fukushima plant between 2041 and 2051 but faces hurdles. The government has decided to start discharging, in small amounts, treated radioactive water at the complex into the Pacific Ocean in about two years' time, though opposition remains.