Major Japanese airline All Nippon Airways Co. has been offering couples the chance to tie the knot in ceremonies aboard an aircraft it has been forced to ground as the coronavirus pandemic continues to hit international travel.

The service, launched in late May, will be available until June 13 on the B-777 large passenger jet at Tokyo's Haneda airport. The company said that seven couples in all will have wedding ceremonies on board and it has finished accepting reservations. 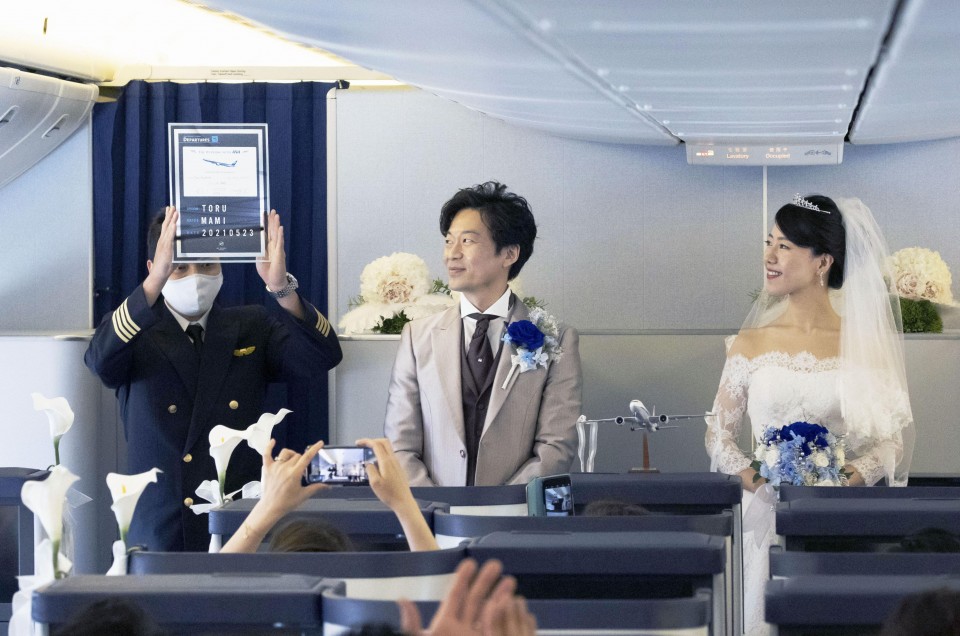 A pilot (L) holds up a certificate of marriage for Toru Murakami (C) and Mami Murakami (R) at an onboard wedding held in All Nippon Airways Co.'s B-777 at Tokyo's Haneda airport on May 23, 2021. (Photo courtesy of ANA)(Kyodo)

During the onboard ceremony, the airline provides live music, an inflight announcement by cabin crew to congratulate the newlyweds and celebrate their marriage, and special lighting to project an image of the galaxy on the ceiling of the cabin, ANA said.

ANA is offering the onboard wedding for some 1.56 million yen ($14,200) and a combination of the ceremony and a party with food in the terminal building for 3 million yen.

The airline said it came up with the unique idea to interest couples who, despite May and June being among the busiest months for marriages, are refraining from holding ceremonies to avoid crowding amid the pandemic. Weddings have also been hit by the ban on serving alcohol at party venues in areas under the current virus state of emergency.

On May 23, the first onboard wedding was held on the business-class deck of the ANA aircraft for Toru and Mami Murakami, a Tokyo couple, with a pilot and some flight attendants as well as other invitees celebrating their marriage. Up to 30 people can attend onboard.

Before the airline unveiled the new onboard wedding plan, the couple had initially planned only to take photos of themselves as a token of their marriage.

"We immediately decided (to take up the offer) for our love of aircraft and enjoyed a dreamy time," Toru said. "At one time I thought that we would not be able to hold a wedding ceremony amid the pandemic, but I am satisfied with my wedding," Mami added.

ANA said it will consider offering the onboard weddings again depending on recovery in demand for international flights.

Meanwhile, in another effort to cushion the damage from the pandemic to its business and increase utilization of its fleet, ANA has also offered domestic sightseeing flights using its huge A380 double-decker passenger jet, previously flying between Japan and Hawaii.

The flights, with meals served, lasted some three and a half hours.