A strong earthquake with a magnitude of 6.8 shook northeastern Japan on Saturday but there were no immediate reports of serious injuries or abnormalities at nuclear plants and no tsunami warning was issued, authorities said.

The quake occurred around 10:27 a.m., about 51 kilometers below the sea surface off the coast of Miyagi Prefecture, according to the Japan Meteorological Agency.

It registered upper 5 on Japan's seismic intensity scale of 7 in parts of Miyagi and lower 5 in areas including neighboring Fukushima and Iwate prefectures, which were all devastated by a massive quake and tsunami about 10 years ago that subsequently triggered nuclear reactor meltdowns. 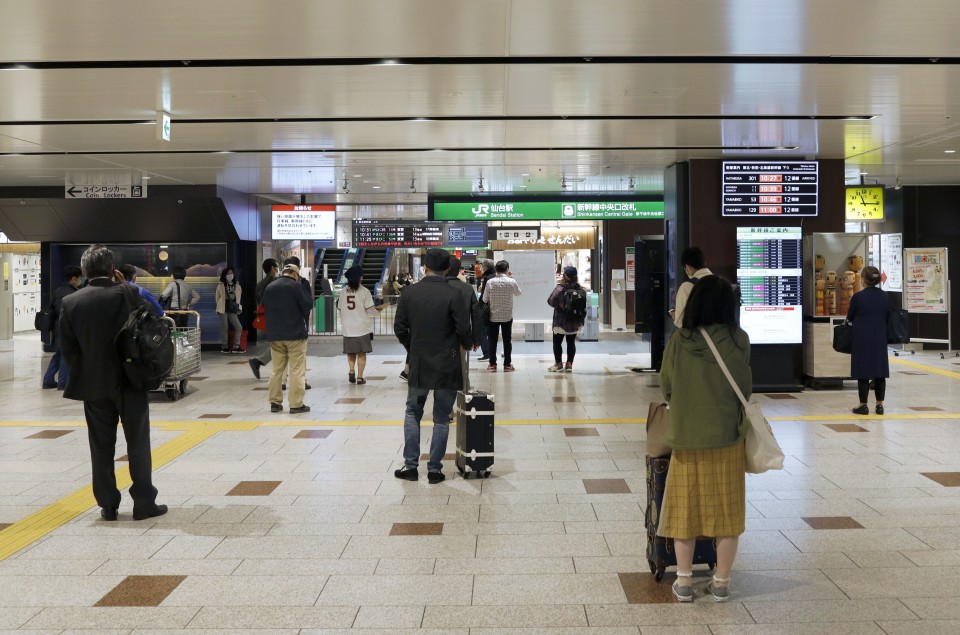 Photo shows people gathering at a gate in JR Sendai Station on May 1, 2021. (Kyodo)

The weather agency warned that a quake of up to upper 5 on the intensity scale, which would make it difficult for people to walk without holding on to something stable, could occur in the next seven days or so.

No irregularities were detected at the Fukushima Daiichi and Daini nuclear power plants, according to Tokyo Electric Power Company Holdings Inc.

According to officials in Fukushima and Miyagi, a total of three injuries have been reported.

Some sections of expressways and train services, including those on the Tohoku Shinkansen Line, were suspended following the temblor, which was also felt in Tokyo. The shinkansen service fully resumed after about five hours of suspension.

Saturday marked the first day of a five-day holiday and a number of people were seen evacuating from JR Sendai Station, with university student Asuka Koike, who was on her way to her hometown in Fukushima Prefecture, saying, "I don't know what to do. I'm afraid as there have been many earthquakes recently."