A survivor of the 1945 atomic bombing of Hiroshima pleaded with world leaders to commit to nuclear disarmament at an event Thursday marking the opening of a museum exhibit in Australia that explores the destruction and recovery of the only two cities to be subjected to nuclear attacks.

Speaking from Hiroshima via videoconferencing, Yoshiko Kajimoto, 90, addressed attendees at the opening event for "War and Peace: The atomic bombing of Hiroshima and Nagasaki" at the Australian National Maritime Museum in Sydney. 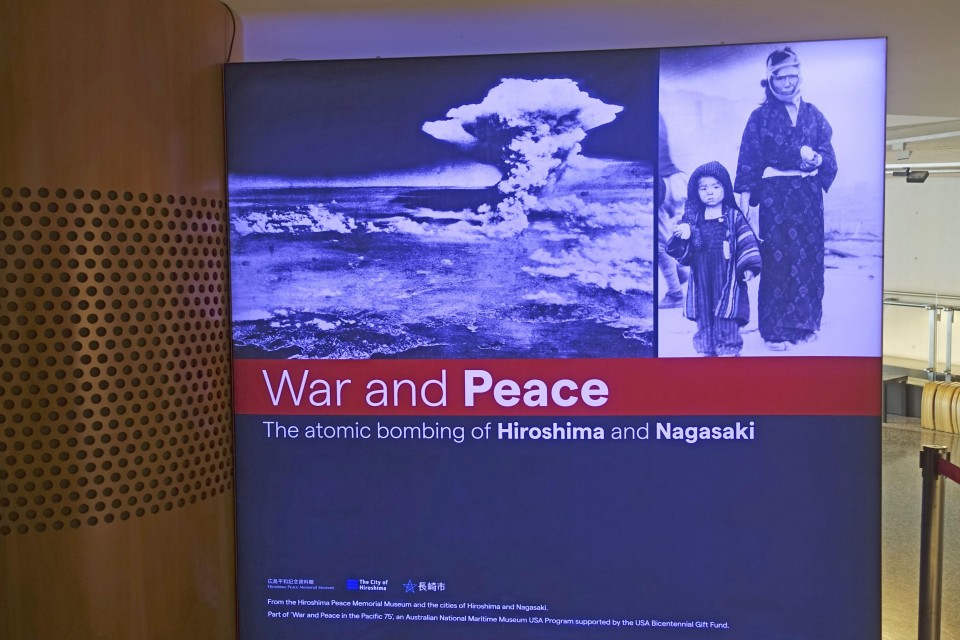 Photo shows the site of the exhibit "War and Peace: The atomic bombing of Hiroshima and Nagasaki" at the Australian National Maritime Museum in Sydney on May 20, 2021. (Kyodo)

Kajimoto, who was 14 at the time of the atomic bombing, described the immediate aftermath as a "scene from hell," where the "stench of burning human flesh stuck to our bodies and our clothing."

"With the collective power of all who seek peace, bolstered by the spirit of the departed hibakusha, I know we can rid this world of nuclear weapons," she said, using the Japanese term for atomic bomb survivors.

"We cannot allow these horrifying nuclear weapons to exist on this Earth. Neither can we allow our children nor anyone on Earth to suffer as we have."

The exhibition, which is from the Hiroshima Peace Memorial Museum and the cities of Hiroshima and Nagasaki, has toured 19 countries and 53 cities since 1995. It includes one of four paper cranes made by U.S. President Barack Obama on his visit to Hiroshima in 2016, as well as several tiny paper cranes folded by Sadako Sasaki, the 12-year-old who famously made over 1,000 origami cranes as she fought radiation-induced leukemia.

Kevin Sumption, director of the Australian National Maritime Museum, described the exhibition as "possibly the most powerful group of objects we've ever had."

"The bombing of Hiroshima and Nagasaki are two of the most significant last acts of the war in the Pacific...(and) this exhibition provides a powerful reminder of the human costs of these events."

The consul general of Japan in Sydney, Masahiko Kiya, said it is "a solemn privilege to be able to share these exhibitions with Australians," adding that "Japan continues its efforts to make substantive contribution to our shared goal of realizing a world without nuclear weapons."

The exhibition officially opens Friday and runs through Aug. 29.