Fifty-nine percent of 87 local governments that have introduced, or plan to introduce, a same-sex partnership system feel that Japan's current system for sexual minorities is inadequate, a Kyodo News survey showed Sunday.

The survey, which collected responses from three prefectural governments and 84 municipalities in 29 prefectures from February to March, also found that no local government felt the current system was sufficient. 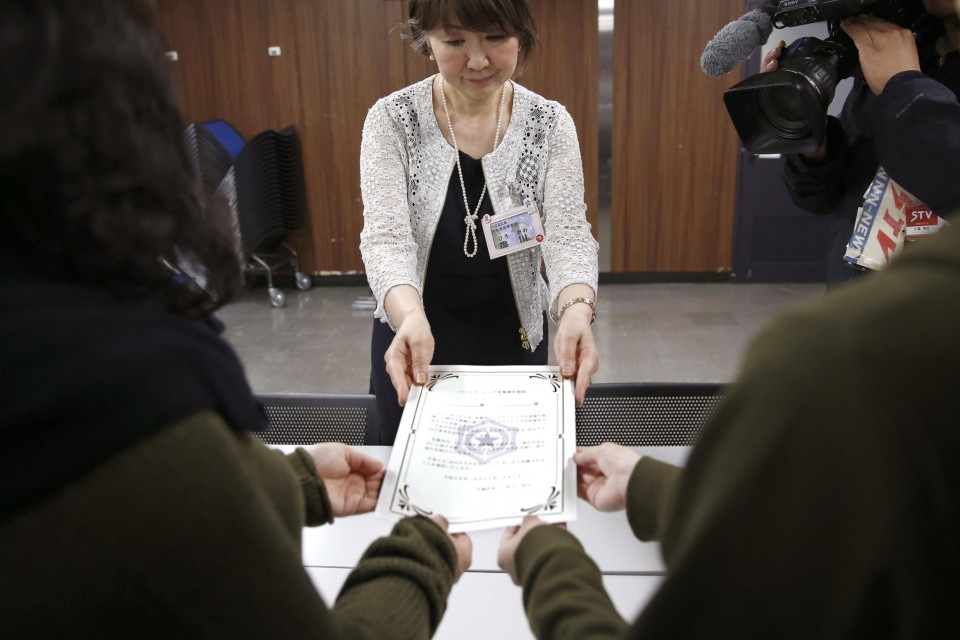 File photo shows a Sapporo city official (back) giving a female couple a receipt certifying that the city government has accepted their "partnership vow" at the municipal office building in northern Japan on June 1, 2017. Sapporo became the first major city in Japan to officially recognize same-sex partnerships between lesbian, gay, bisexual and transgender couples. (Kyodo) ==Kyodo

The survey found that 36 percent of respondents were undecided, while five cities did not give a response to the question.

Maki Muraki, founder and director of Nijiiro Diversity, a nonprofit organization supporting the rights of LGBT people, said that the responses show that "the voices of involved parties have reached the local government through the same-sex partnership system," adding that "the ball is now in the court of the Diet."

Another expert on the issue said that while local governments are doing their best, the responses indicate that state government's initiatives are "overwhelmingly insufficient."

On March 17, the Sapporo District Court made history when it became the first court to rule that the government's failure to recognize same-sex marriage is unconstitutional as it violates the right to equality.

The current system in Japan, which is the only Group of Seven country that has not legalized same-sex marriage, includes a special law that allows people to change their gender in the family register and guidelines that designate outings -- the disclosure of one's sexual orientation or gender identity without consent -- as an abuse of power.

While some municipalities have introduced a partnership certification system for same-sex couples to recognize family relationships, such certificates are not legally valid.

This means that LGBT people are not granted the same benefits enjoyed by married couples such as medical visitation rights and the ability to make medical decisions for their partners, co-parenting rights and spousal income tax deductions.

Some local governments further stressed the need for same-sex marriage in their survey responses, with Naha in Okinawa Prefecture highlighting the discrepancy in how consent for emergency surgeries and explanations of medical conditions are handled even for those couples who have registered via the partnership system.

Without same-sex marriage, "the disadvantage (LGBT couples face) in terms of spousal rights such as taxes, pension and inheritance cannot be resolved," Tokyo's Edogawa Ward also wrote in its response.

Meanwhile, Soja City in Okayama Prefecture cited the issue of couples having to cancel their partnership registration whenever they move to a new municipality, as each one has its own system.

The survey, based on a list published by the civic organization Same-sex Partnership Net, was mailed in February to municipalities in 30 prefectures that have introduced, or plan to introduce, a partnership system as of Feb. 1.