India's health ministry said Tuesday it has approved Russia's Sputnik V vaccine for emergency use against the coronavirus, making it one of only three COVID-19 vaccines registered by the country's regulatory authorities.

The ministry said the Drugs Controller General of India, which falls under the ministry's purview, is granting "permission for restricted use in emergency situations." 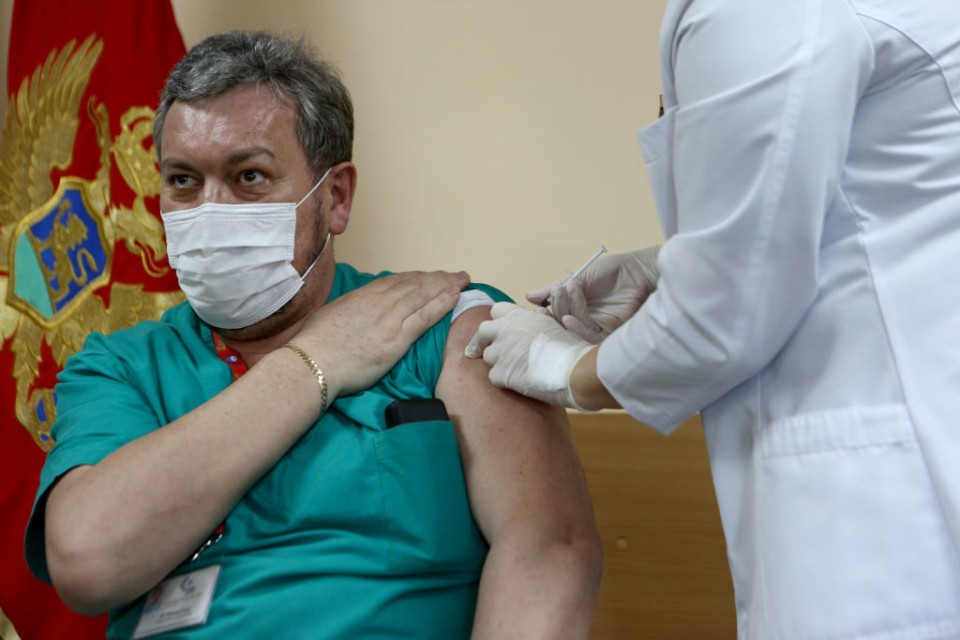 A healthcare worker administrates a dose of the Sputnik V COVID-19 vaccine to her colleague in Montenegro on Feb. 23, 2021. (Getty/Kyodo)

Dr. Reddy's Laboratories Ltd., a domestic pharmaceutical company, will import the vaccine for use in the country, it said.

"We are very pleased to obtain the emergency use authorization for Sputnik V in India," the Hyderabad-based company's Co-Chairman and Managing Director GV Prasad said in a separate press release.

"With the rising cases in India, vaccination is the most effective tool in our battle against COVID-19. This will enable us to contribute to our nation's effort of vaccinating a significant proportion of our population," he said.

The Russian Direct Investment Fund, which has partnered with Dr. Reddy's to conduct the clinical trials of Sputnik V and distribute the vaccine in India, said India has become the 60th country to approve Sputnik V.

The Russian sovereign wealth fund said it has reached agreements with leading pharmaceutical companies in India, aimed at production of more than 850 million doses per year.

Earlier this year, India's drug regulator gave a green light to emergency use authorization for two vaccines -- Covaxin, developed by India's Bharat Biotech International Ltd., and Covishield, developed by British drugmaker AstraZeneca Plc and the University of Oxford and manufactured by the Serum Institute of India.

The country started its inoculation program on Jan. 16, vaccinating its health care and frontline workers in the first phase.

Currently, people aged 45 or above are being vaccinated. So far, more than 100 million doses have been administered.

However, with a population of over 1.3 billion, demand for vaccines in the country has been outstripping supply.

On Monday, the South Asian country again surpassed Brazil to become the second most infected country in the world after the United States.

It is in the throes of a second virus surge and reported 161,736 new cases on Tuesday.