TOKYO - Swimming star Rikako Ikee, who is recovering from leukemia, received a berth at the Tokyo Olympics in the women's 4x100-meter medley relay after winning the 100 butterfly on Sunday at Japan's national championships.

Ikee was in tears after finishing in 57.77 seconds at Tokyo Aquatics Center, the Olympic swimming venue. She needed 57.92 for a place in the medley relay, while 57.10 was the Japan Swimming Federation's required standard to compete for Japan this summer in the 100 butterfly.

"I've never thought I'd be able to win the 100. I was less confident compared to the qualifier five years ago and I thought I could win only in the distant future," Ikee said.

"But I trained to win and I was saying to myself 'I'm back', as I entered this race."

Ikee was a close second at the turn before overtaking leader Ai Soma, and held off the fastest semifinalist, Suzuka Hasegawa, by 0.41 second for a memorable victory. 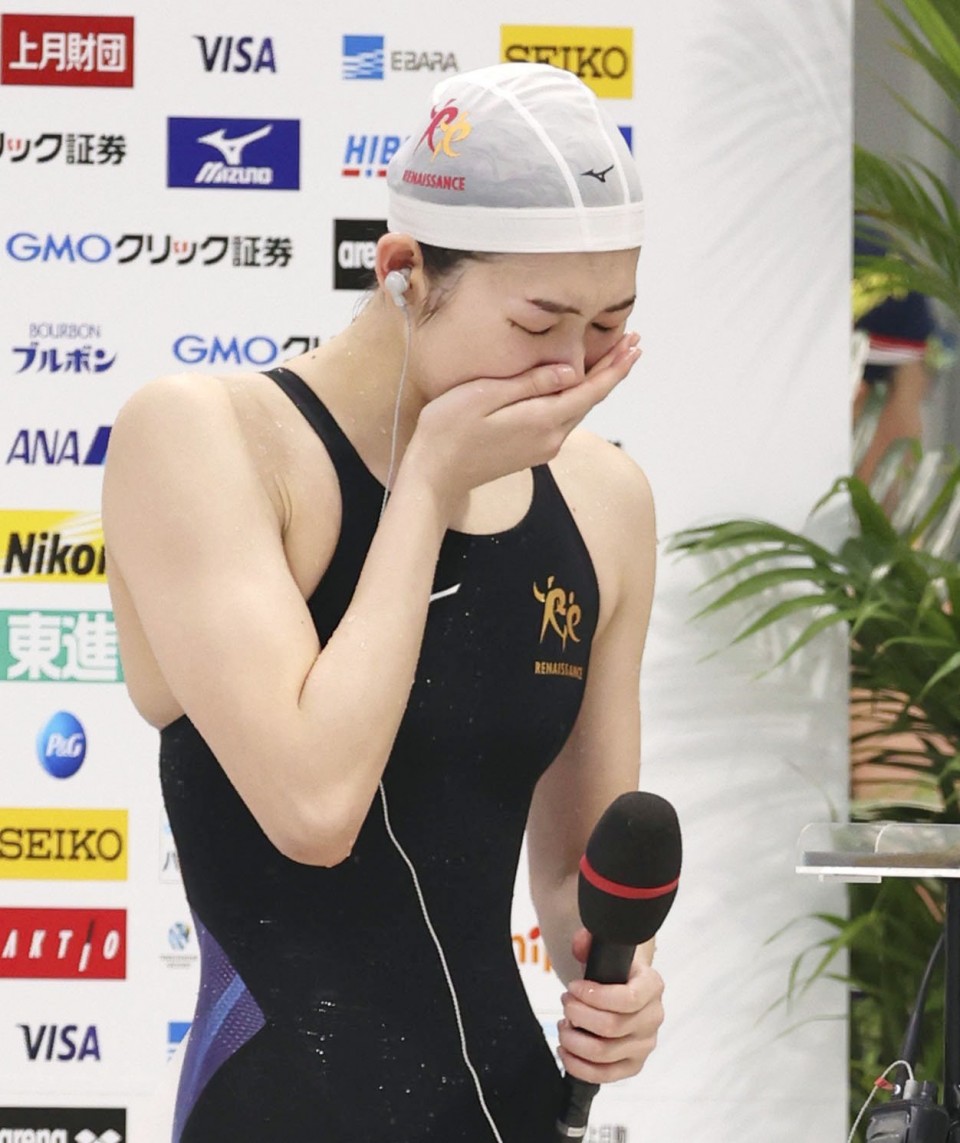 Rikako Ikee is in tears during an interview after winning the women's 100-meter butterfly final at the national swimming championships at Tokyo Aquatics Centre on April 4, 2021, the final qualifying event for the Tokyo Olympics. (Kyodo) ==Kyodo

Swimming: Rikako Ikee will compete in nationals after butterfly win 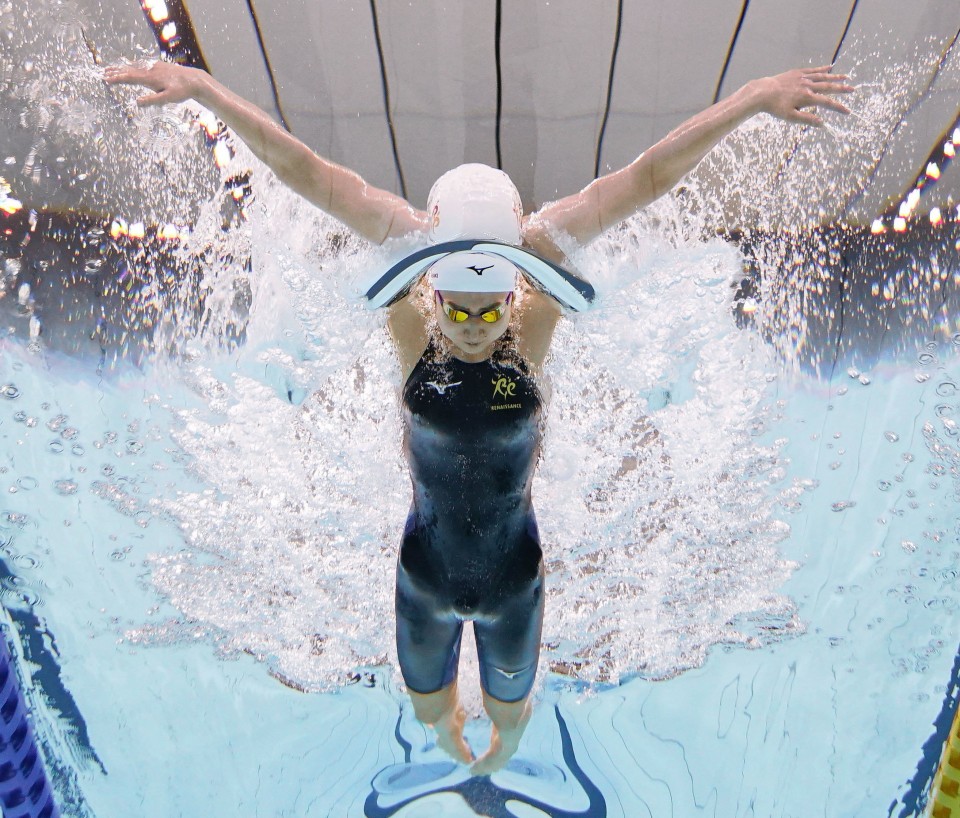 Rikako Ikee swims on her way to winning the women's 100-meter butterfly final at the national championships at Tokyo Aquatics Centre on April 4, 2021, the final qualifying event for the Tokyo Olympics.(Kyodo)

"A lot of emotions came flooding back," she said. "I recalled the time when I couldn't win against anyone. At my first 100 butterfly back (in February), I thought it would take a long time to produce a good performance."

"I really feel happy (about making the Tokyo Olympics). I'll aim to improve my time toward the games, (and) so I can do better on that stage."

She is competing in two more Olympic qualifying events here, the 50 and 100 freestyle, plus a non-Olympic event, the 50 butterfly.

The 20-year-old, competing at the nationals for the first time since being diagnosed with the disease in February 2019, was third in the 100 butterfly semifinals in 58.48 seconds a day earlier.

"I didn't get the turns right in the semifinals and I thought there were areas to improve," she said. "So I wasn't expecting to get below 58 seconds or the time needed for the relay, so I'm really happy." 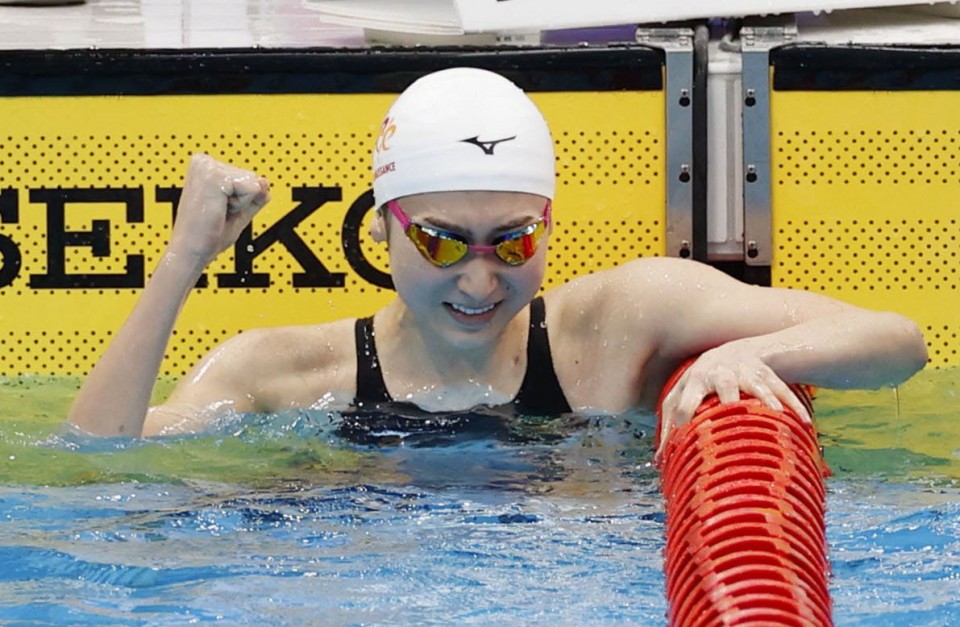 Rikako Ikee, who is recovering from leukemia, reacts after winning the women's 100-meter butterfly final at the national swimming championships at Tokyo Aquatics Centre on April 4, 2021, the final qualifying event for the Tokyo Olympics. (Kyodo) ==Kyodo

Ikee returned to the pool in March 2020 before she resumed competing in August. She has publicly targeted the 2024 Paris Olympics but her rapid recovery meant an appearance at this summer's Tokyo Games was becoming a possibility.

"Even at really tough, hard times, I felt that effort would be rewarded," said an emotional Ikee. "I was really happy when I saw the results. It was beyond words."

Asked to grade her current level of joy, Ikee said she was at "70 to 80 percent" and that 100 percent would come with an Olympic medal.

Shoma Sato clinched his spot in the Olympic 4x100 medley relay by winning the 100 breaststroke in 59.30.