Violent acts against Asian Americans have risen over the past year amid the coronavirus pandemic, with experts saying the increase is rooted in U.S. history of scapegoating Asians in difficult times, as well as racial profiling and a failure to understand Asian diversity.

"This is a long history that has been simmering," said Nadia Kim, a professor of sociology at Loyola Marymount University in California, the U.S. state with the largest Asian American population. 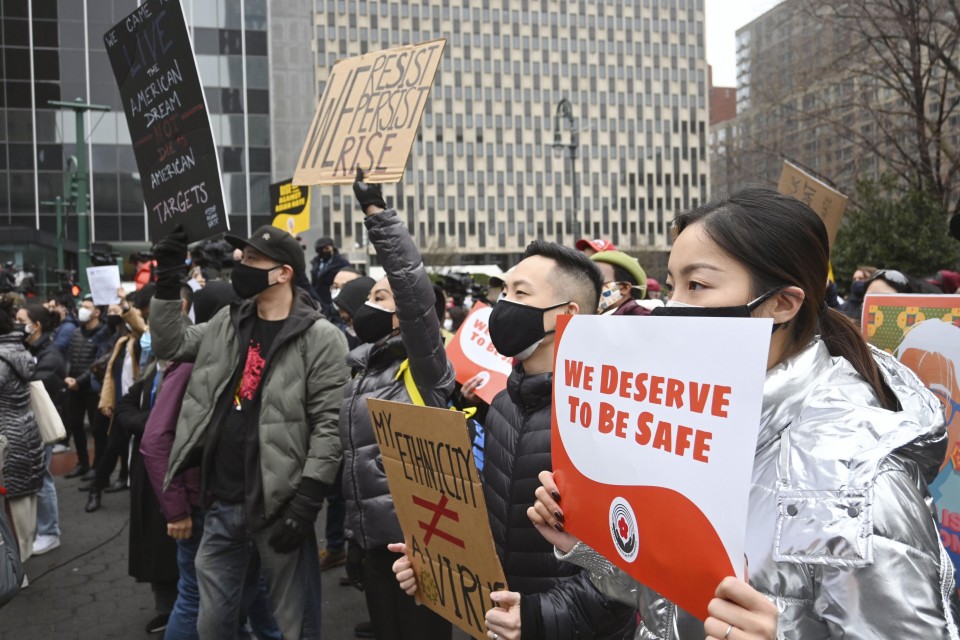 "Donald Trump couldn't have just lit a match and everything exploded if there was nothing there to begin with," she added, referring to the former president's rhetoric characterizing the pandemic, which was initially detected in China, as the "China virus" and using other language linking the disease to Asian people.

The country's history of stigmatizing Asians dates back to the mid-19th century when an inflow of Chinese immigrants to the United States led to the rise of the "yellow peril" myth. Anger at competition from cheap Chinese labor increased, and many white Americans at the time regarded Chinese culture as too foreign and unassimilable.

In this atmosphere of xenophobia, Chinese communities were blamed for various disease outbreaks in western U.S. cities like San Francisco in the 19th and early 20th centuries, according to experts.

During World War II, after Japanese warplanes had attacked Pearl Harbor and drawn the United States into the battle, the U.S. government forcibly removed people of Japanese descent from their homes and relocated them to internment camps under the rationale that they might spy for Japan or sabotage the war effort.

German and Italian Americans did not endure the same treatment, although the United States also declared war on their countries of origin.

Prior to the coronavirus pandemic, Chinese Americans were also a target of discrimination in the United States during the SARS outbreak, first reported in Asia in 2003.

Most recently, the United States has seen renewed concerns over anti-Asian hate crimes especially after the killing of eight people, six of whom were Asian women, in a shooting rampage at three spas in the southern state of Georgia on March 16.

While it remains unclear whether the shootings in Georgia were racially motivated, the country has seen a surge in violent hate crimes and discrimination against Asians and Asian Americans over the past year.

The number of anti-Asian hate crimes in 16 of America's largest cities increased to 120 cases in 2020, up 145 percent from a year before, according to the Center for the Study of Hate and Extremism at California State University, San Bernardino, in its recent analysis of police data.

The first spike occurred in March and April last year amid a rise in novel coronavirus cases and negative stereotyping of Asians relating to the pandemic. The rise occurred despite an overall decline in hate crime likely due to a lack of interaction at frequent gathering places such as mass transit, commercial businesses, schools and events, the center said.

As another factor behind the recent rise in anti-Asian violence, scholars have pointed to white racial resentment based on the stereotype that Asians are smart and successful. Such a "model minority myth" ignores the diverse experiences of Asian Americans and the challenges they face.

Asian women could also be vulnerable to an image that they are sexually available and submissive, which seems to have links to sexual services provided for American soldiers by such women during wartime.

"The denigration of Asian women as always available, and as their sexuality as somehow cheap compared to white women's or American women's, and that kind of historical practice created significant power imbalances, not just around issues of race but also around gender," said Naoko Wake, an associate professor of history and director of the Asian Pacific American Studies program at Michigan State University.

Increased emphasis on education in public schools regarding the history and diversity of Asian American communities could help push back against harmful, homogenizing stereotypes, Wake said.

On March 18, the California State Board of Education approved guidance to help high schools develop ethnic studies courses, focusing on "the often-untold struggles and contributions" of Asian Americans and other minorities in California.

One suggested lesson plan includes studying poetry and art created by Japanese Americans who were sent to internment camps during World War II, allowing students to understand the hostility faced by this community, according to The Associated Press.

Anne Soon Choi, an associate professor at California State University, Dominguez Hills, said she feels many white people have no chance to "learn anything uncomfortable that challenges" their own position within a system built on white supremacy.

Adding the element of racial grievance among such people, Choi said, "We are seeing the worst outcome of that."