A South Korean court on Wednesday dismissed a damages lawsuit brought by a group of former "comfort women" against the Japanese government over their treatment at Japanese military brothels during World War II.

The Seoul Central District Court ruling follows a contrary one in January by the same court that ordered the Japanese government to compensate 12 women, including those who have died since filing the suit. Wednesday's ruling was given by a different panel of judges.

Another ruling in favor of former comfort women would have dealt a further blow to Japan-South Korea ties, which have already sunk to their lowest level in decades after a series of South Korean top court rulings in late 2018 that ordered compensation from Japanese firms for wartime forced labor. 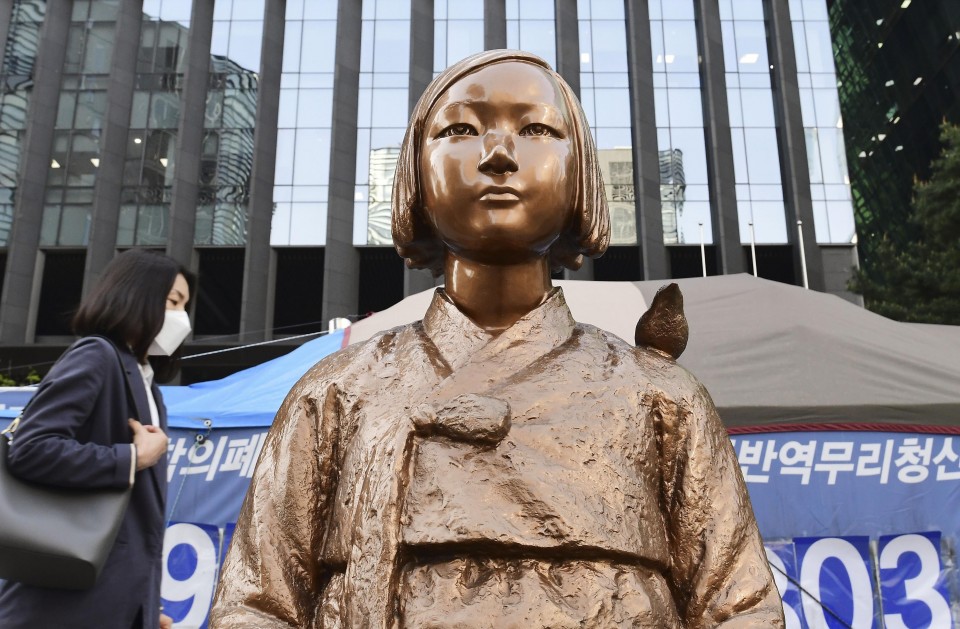 A statue symbolizing "comfort women" forced to work in Japanese wartime military brothels is pictured on April 21, 2021, in front of the Japanese embassy in Seoul. (Kyodo)

In dismissing the suit, the court in Wednesday's ruling applied sovereign immunity to the case -- a concept under international law that a state is immune from the jurisdiction of a court in a foreign country, judging South Korea has no jurisdiction over the case.

Saying there is "no change in customary international law" on the application of sovereign immunity to illegal acts, the court stressed that making an exception in this case would cause great uncertainty.

The court also showed a concern, saying "diplomatic conflicts can occur" with Japan if the court accepts the case by not applying sovereign immunity to the country.

The January ruling had dismissed the application of the principle, saying that the Japanese government committed "intentional, systematic and wide-ranging criminal acts against humanity" by making the plaintiffs work at military brothels.

Wednesday's ruling also noted that some of the plaintiffs in the latest case had received money from a foundation set up in South Korea with Japanese contributions following a December 2015 deal between the two countries.

The court said the deal, which was struck to resolve a dispute over the comfort women issue, can be seen as a remedial measure and still effective.

"Though the agreement was just a political one, it was not struck between individuals but nations. We cannot deny the fact that a remedial measure was prepared for the victims, including the ones involved in this case," the court said.

The court also urged the South Korean government to make efforts "internally and externally" to resolve the comfort women issue, including diplomatic negotiations with Japan.

Lee Yong Soo, a former comfort woman and one of 20 plaintiffs in the latest case, rejected Wednesday's ruling, saying, "Nonsense." The 92-year-old told reporters that she would take the case to the International Court of Justice.

Lee Sang Hee, a lawyer for the plaintiffs, called the ruling "absolutely hard to accept," adding that any appeal would depend on consultations with them. If the ruling is appealed, a higher court would examine whether sovereign immunity should be applied.

In Tokyo, Japan's top government spokesman, Chief Cabinet Secretary Katsunobu Kato, said the government has yet to obtain the text of the ruling. But he added, "Japan had repeatedly said the case needed to be rejected as the Japanese government cannot be subjected to South Korean jurisdiction under the principle of sovereign immunity."

"If the latest ruling is based on the Japanese government's stance on sovereign immunity, we deem it appropriate," Kato said at a regular news conference.

Kato said Japan will "continue to strongly demand an appropriate response from the South Korean side" to restore healthy bilateral relations.

South Korean Foreign Minister Chung Eui Yong said after the ruling that his country has always sought realistic solutions that would satisfy the women, including through the December 2015 deal.

The Foreign Ministry also said in a statement the government will continue to make maximum efforts to recover honor and dignity of the victims, while urging Japan to take a stance that accords with apologies it made in the deal.

The latest case was brought by 20 plaintiffs, including the bereaved families of some former comfort women who have died, in December 2016. They sought a total of 3 billion won from the Japanese government.

The Seoul court was originally scheduled to rule on the case on Jan. 13, but postponed it after the Jan. 8 ruling, on the grounds that a few points raised by plaintiffs' lawyers needed further review, in addition to a change in judges that made up the panel.

Japan has taken the position that all claims related to its 1910-1945 colonial rule of the Korean Peninsula were settled "completely and finally" under a 1965 bilateral agreement under which it provided financial aid to Seoul.

But assets such as the Japanese Embassy in Seoul are thought to be difficult to seize because they are protected under a provision in the Vienna Convention on Diplomatic Relations, which stipulates the premises of a diplomatic mission are inviolable.

In connection with the same case, the court also decided not to approve seizure of Japanese government assets that was sought to pay legal costs, citing the possibility that doing so could violate international law.

Under the deal struck in December 2015, the Japanese government contributed 1 billion yen ($9.25 million) to the foundation set up in South Korea to help the women financially.

Nine of the 20 plaintiffs in the second case subsequently received cash from the foundation, but a lawyer for them says the money cannot be considered as proper compensation as it was not based on a legally binding bilateral agreement.