Hong Kong media mogul Jimmy Lai was convicted Thursday along with six other pro-democracy advocates of taking part in a banned protest in 2019, the first conviction for most of the prominent activists linked to the months-long anti-government movement.

Among the others found guilty at the court of organizing and participating in the unauthorized protest on Aug. 18, 2019, were barristers and former legislators Martin Lee, dubbed "father of democracy in Hong Kong," and Margaret Ng. 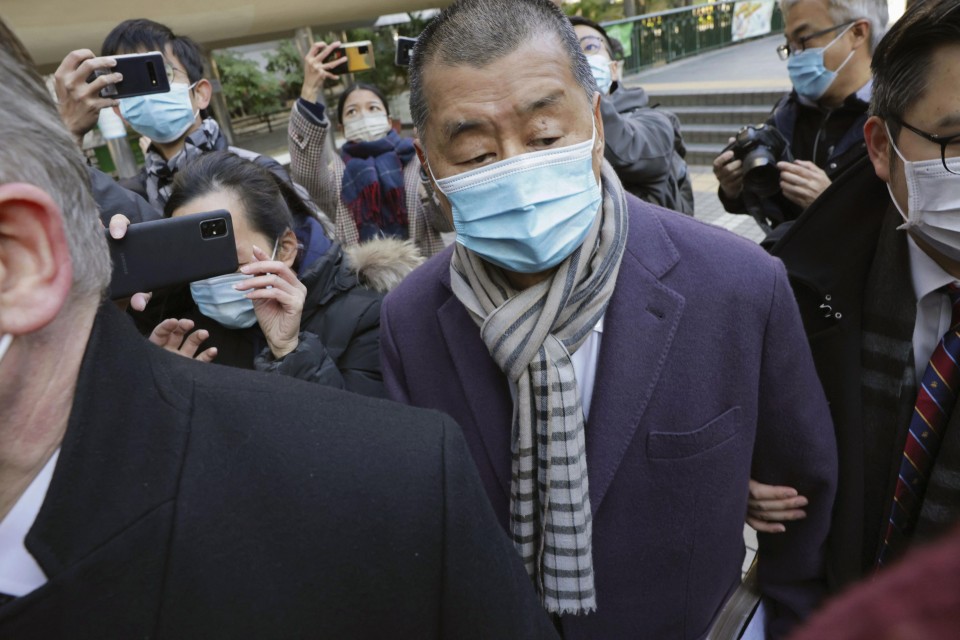 A rally and march held in central Hong Kong that day drew 1.7 million people, according to organizers. They protested against a since-withdrawn bill aimed at allowing criminal suspects to be sent to mainland China and in opposition to police use of force against protesters.

District Court Judge Amanda Woodcock said in the ruling the prosecution was able to prove beyond reasonable doubt the defendants had organized and participated in the unauthorized protest.

The offense of unlawful assembly is punishable by up to five years' imprisonment.

Mitigation will be heard on April 16 before sentencing. Five of the seven activists were released on bail but barred from leaving Hong Kong, while Lai and Leung Kwok-hung will continue to be detained over separate charges relating to national security law offenses.

Apart from the seven defendants, former legislators Au Nok-hin and Leung Yiu-chung had pleaded guilty to the same charges in February and will likely be sentenced on April 16.

"We felt regret that we have lost this case," Lee Cheuk-yan, one of the convicted activists, told reporters after the trial ended. "It seems the court has made a judgment that the police banning (public assembly) can override our constitutional right. (If we are sentenced,) it is our badge of honor to be in jail for walking together with the people of Hong Kong."

The group will, along with dozens of other activists, stand trial for taking part in similar protests in 2019, scheduled in the coming months.

Lai is the founder of Next Digital Ltd., which publishes the outspoken Apple Daily newspaper. He is also fighting an ongoing trial over charges he colluded with foreign forces in breach of the national security law. He has been in detention since late last year.

The anti-extradition bill protest in 2019 morphed into an anti-government movement that lasted for eight months, leading to more than 10,000 people being arrested on charges ranging from rioting to illegal assembly and possession of weapons.

Foreign interference was blamed for the lasting social unrest and prompted China to impose the sweeping national security law. At least 100 people have been arrested for breaching the law since it took effect on June 30, including 55 democracy advocates who joined a primary election that was alleged to be a subversive plot.