The Bank of Japan projected Tuesday its 2 percent inflation target will not be attainable in 2023 when Governor Haruhiko Kuroda's current term ends, underscoring the daunting challenge he continues to face despite a decade of aggressive monetary easing.

After keeping its ultraloose monetary policy unchanged at its regular two-day meeting, the BOJ said in its outlook report that the core consumer price index, excluding volatile fresh food items, is expected to rise 1.0 percent in fiscal 2023 from a year earlier.

"It's unfortunate that attaining the 2 percent target has been taking time," Kuroda said during a post-meeting press conference, adding that the goal is still achievable with its powerful monetary easing.

Known as the Kuroda bazooka, bold monetary easing since he became governor in 2013 initially lifted shares and weakened the yen, improving corporate sentiment. But the timeframe for hitting the 2 percent target has been repeatedly delayed, and Kuroda now says the central bank will seek to attain it as soon as possible.

When asked about the possibility of staying on as BOJ chief beyond his current term, Kuroda only said any appointment is up to the Cabinet.

The central bank will do its utmost to meet the target regardless of his term, the governor added.

Despite high uncertainty as a third COVID-19 state of emergency is in place in Japan, the BOJ gave a slightly more upbeat view on the economy, but the outlook for prices was cut due to lower data usage fees by major mobile operators in response to mounting government pressure.

The central bank said the Japanese economy will likely grow 4.0 percent for the year through next March, rather than the previously estimated 3.9 percent expansion. The core CPI, a key indicator of inflation, is expected to gain just 0.1 percent instead of the 0.5 percent rise seen in January, weighed down by lower mobile charges.

"There are high uncertainties over the impact of coronavirus infections and high downside risks (to the economy) for the time being," Kuroda said.

The pandemic is part of the reason why the BOJ tweaked policy tools in March to brace for protracted monetary easing as prospects are dim that the momentum toward the 2 percent target will accelerate.

The latest projections underscore the daunting task faced by the BOJ in accelerating inflation in a country where people do not expect prices to rise based on past experience with years of deflation.

The BOJ decided to keep its "yield curve control" scheme intact, setting short-term interest rates at minus 0.1 percent while guiding the 10-year Japanese government bond yield around zero percent. It seeks to flexibly buy exchange-traded funds, investment products consisting of stocks tracking the Topix index, in times of market turmoil, with its upper limit on 12 trillion yen ($111 billion) a year.

The COVID-19 crisis has prompted major central banks such as the U.S. Federal Reserve and the European Central Bank to ramp up support for their ailing economies, and they agree that it is still early to scale back stimulus even as there are worries about inflation in some countries. 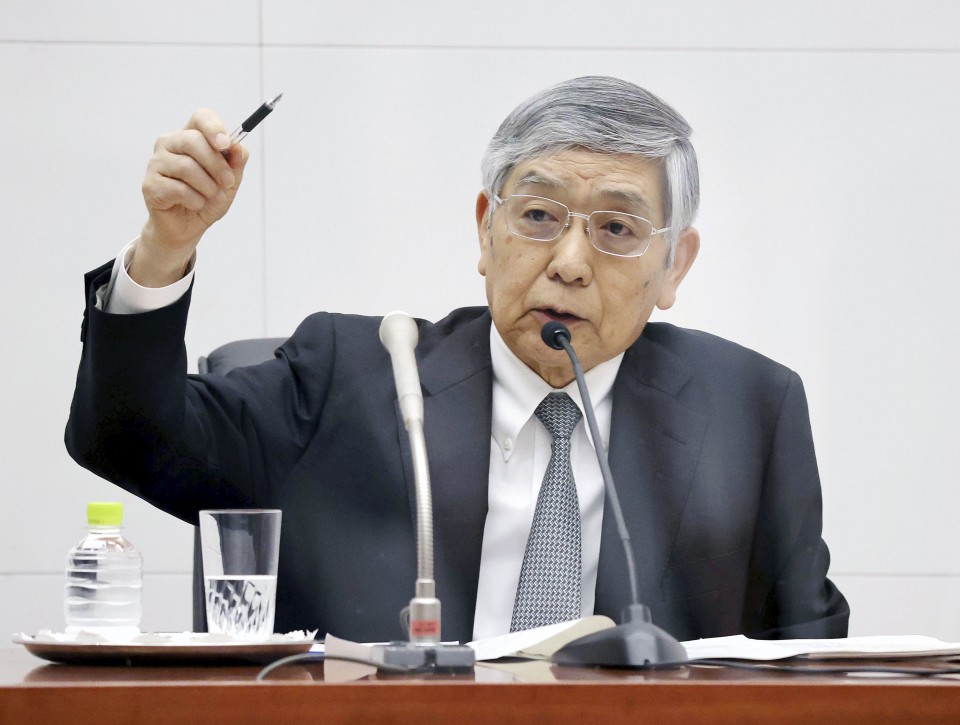 Japan's economy has received support from recoveries in overseas economies, including major trading partners, the United States and China. But domestic demand remains weak, and the fresh state of emergency from Sunday to May 11 over COVID-19 is raising concern about its blow to the economy and a further divergence between manufacturers and service providers in the pace of the recovery.

"Japan's economy has picked up as a trend, although it has remained in a severe situation due to the impact of COVID-19 at home and abroad," the BOJ said in the report, maintaining its basic view.

Looking ahead, the economy is likely to recover, the bank said, warning of downside risks due to the pandemic. It said economic activity, mainly in the face-to-face services sector, will likely be lower than that before the pandemic "for the time being."

On prices, the BOJ expects the negative impact from the pandemic and lower mobile phone charges to continue for a while, but the core CPI will turn positive and rise thereafter.

Besides mobile operators, price-cutting is limited to only some retailers and is not widespread, a relief to the BOJ as it seeks to prevent a return to deflation. Still, the economic outlook report said there is uncertainty over future price-setting behavior.

The core CPI dipped 0.1 percent in March from a year ago for the eighth straight monthly decline, before the impact of the reduced mobile charges introduced from late March is reflected.

The BOJ is already preparing for the possibility that monetary easing will be maintained longer than previously anticipated. The pace of recovery is expected to be faster in the United States and China, as vaccinations in Japan have lagged with the Tokyo Olympics and Paralympics just three months away.

Even if differences emerge among major central banks depending on the pace of recovery and price situations in their respective countries, this will unlikely have a big impact on currency moves, Kuroda said, noting that they share the goal of 2 percent inflation.

The ECB maintained its accommodative monetary policy last week, and President Christine Lagarde said it is "premature" to discuss the phasing out of bond-buying. The Fed's policy-setting meeting will begin Tuesday.

FOCUS: Markets may see BOJ's policy tweaks as signaling change down the road