Yu Darvish threw seven innings of one-hit, one-run ball Saturday but took his first loss of the season as the Los Angeles Dodgers shut out the San Diego Padres 2-0.

The Japanese right-hander struck out nine in a pitching duel with three-time Cy Young Award-winning Dodgers ace Clayton Kershaw, who improved to 3-1 after fanning eight and allowing two hits over six innings of the National League West contest. 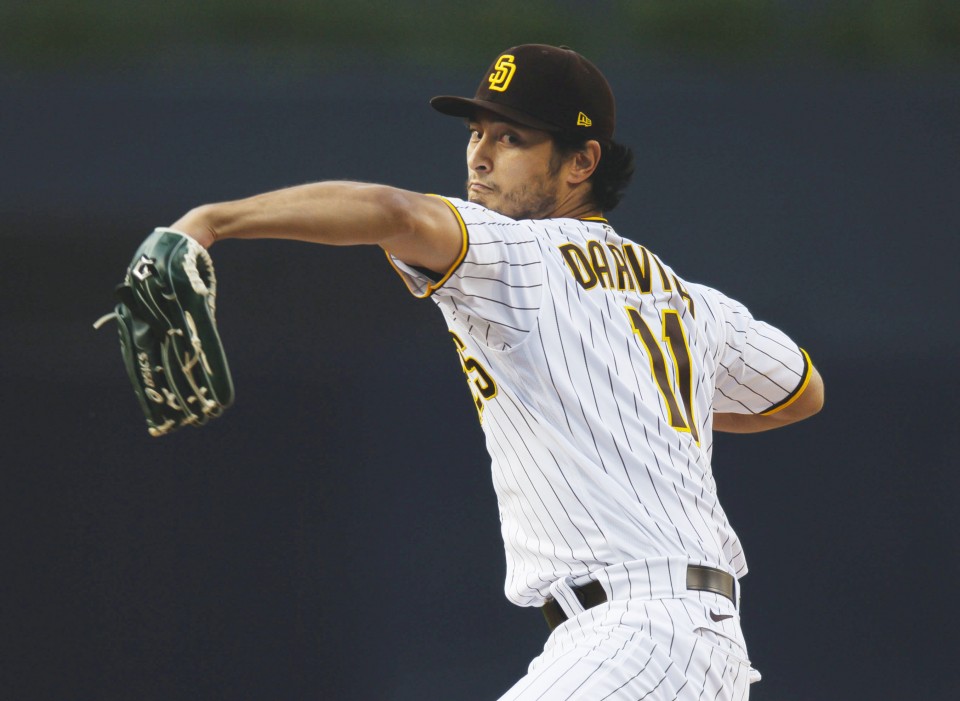 Yu Darvish #11 of the San Diego Padres delivers a pitch in the first inning of an MLB game against the Los Angeles Dodgers on April 17, 2021 at Petco Park in San Diego, California. (San Diego Padres/Getty/Kyodo)

Darvish (1-1) ironically surrendered the decisive run against his former team with Kershaw at the plate in the top of the fifth at San Diego's Petco Park, walking the career .160 batter with the bases loaded.

Following four flawless innings, Darvish ran into trouble with two out in the fifth. Having coaxed groundouts from the first two batters, he hit Zach McKinstry with an errant curveball.

A line-drive single to Luke Raley and walk to Austin Barnes brought Kershaw to the plate. He didn't bite as Darvish's eighth pitch of the plate appearance, a 3-2 cutter, failed to find the strike zone, allowing McKinstry to walk home.

Justin Turner extended the lead with a solo homer off Emilio Pagan in the top of the ninth.

The Padres rallied in the final frame, but Mookie Betts produced a spectacular diving catch to rob Tommy Pham and end the game with two runners on.

The Dodgers improved to an NL West leading 13-2 with the win, their eighth straight, while the Padres are 4.5 games back at 9-7.