TOKYO - Japanese Prime Minister Yoshihide Suga has decided to declare another state of emergency in Osaka Prefecture as a surge in severe cases of COVID-19 strains its medical system, government sources said Tuesday, while Tokyo is set to seek the same move in a matter of days.

Osaka Gov. Hirofumi Yoshimura said he intends to close major amusement and commercial facilities such as theme parks and department stores in addition to current measures including asking restaurants and bars to shorten opening hours.

After meeting with members of his Cabinet including health minister Norihisa Tamura and Yasutoshi Nishimura, minister in charge of coronavirus response, Suga told reporters the government will consider Osaka's request for the state of emergency and reach a "swift" conclusion.

The declaration would be the third since the start of the novel coronavirus pandemic early last year, coming just three months before the Tokyo Olympics are slated to begin. 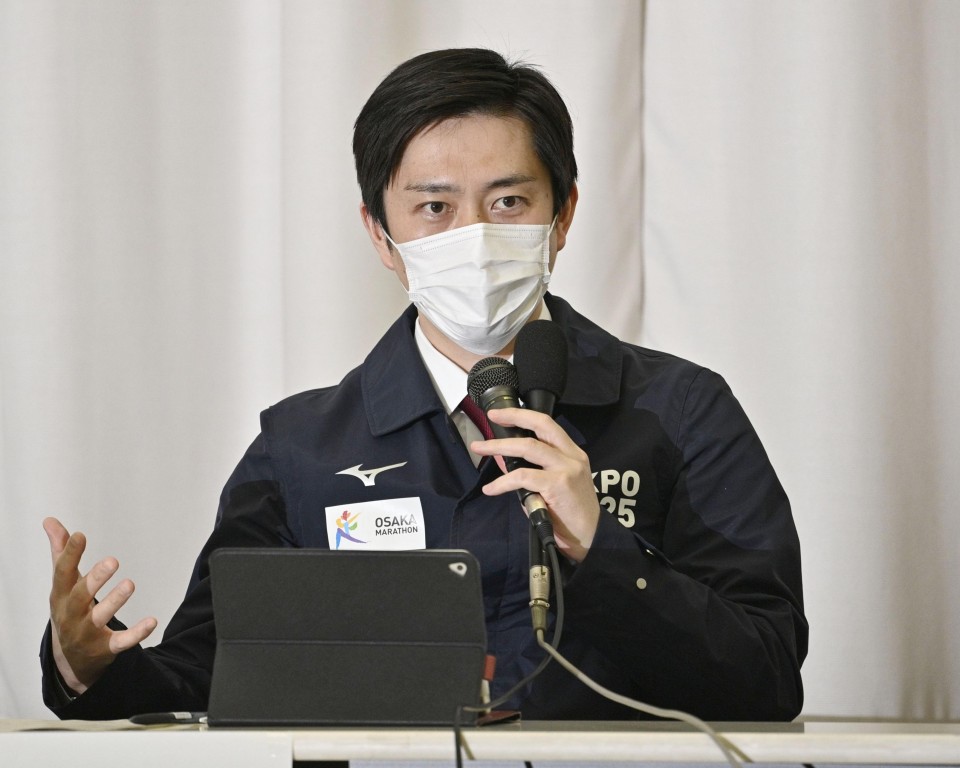 Osaka Gov. Hirofumi Yoshimura attends a meeting of the prefectural government's anti-coronavirus task force in Osaka on April 20, 2021. The western Japan prefecture decided to ask the central government to declare another state of emergency covering the area due to a rapid resurgence of infections. (Kyodo) ==Kyodo

Suga said the state of emergency would not impact hosting of the games, reiterating the government will work to ensure they are "safe and secure."

Osaka formally decided to seek an emergency declaration at a task force meeting earlier in the day, with Yoshimura saying it should be in place for one month.

"The occupancy rate of hospital beds has risen rapidly, and health care availability is in a critical situation" in Osaka, said Chief Cabinet Secretary Katsunobu Kato at a press conference.

Health minister Tamura said, "The government as a whole will consider (the need to declare another state of emergency) after hearing expert opinions," adding it will work with the prefecture to implement tougher anti-virus steps if the experts deem current measures are insufficient.

As coronavirus infections resurge nationwide with the spread of more contagious variants, quasi-emergency steps were implemented Tuesday in parts of Saitama, Chiba and Kanagawa prefectures neighboring Tokyo as well as Aichi Prefecture, which contains the major central Japanese city of Nagoya, effective through May 11.

Such measures were already in place in Tokyo as well as Osaka, Kyoto, Hyogo, Miyagi and Okinawa prefectures.

Tokyo Gov. Yuriko Koike on Tuesday stressed the need to act quickly to prevent the coronavirus from further spreading.

"Looking at the current situation, we have to (request a state of emergency) as soon as possible," she told reporters.

Hyogo, which lies next to Osaka, will decide whether to make the same request at a task force meeting Wednesday.

Nishimura has said Tokyo needs tougher anti-virus steps as the number of infections is expected to continue rising as people visit entertainment districts in the capital.

The previous state of emergency was in place in Osaka and its vicinity through the end of February and in the capital and three adjacent prefectures through March 21.

Osaka, where quasi-emergency steps have been in force since April 5, reported another 1,153 coronavirus cases on Tuesday, a record high for that day of the week. Tokyo confirmed 711 infections while Hyogo logged 427.

Yoshimura has said the current steps under the quasi-emergency, including requests for restaurants and bars in the city of Osaka to close by 8 p.m., were "not effective enough" to contain the recent surge of infections.

Osaka Mayor Ichiro Matsui has said classes of the city's elementary and junior high schools will basically be conducted online once an emergency is declared.

Schools, department stores and amusement parks were all closed under the initial state of emergency declared in April last year but not during the second, which was commenced in January this year.