The head of this summer's Tokyo Olympics' organizing body on Friday dismissed the possibility of canceling the postponed games, despite a recent sharp rebound in coronavirus infections in the capital and elsewhere in Japan.

The denial from Seiko Hashimoto came a day after a powerful figure in Japan's ruling Liberal Democratic Party suggested that canceling the Olympics could be an option if the surge in infections continues, fueling speculation the government has altered its long-held stance on the upcoming global sporting event.

"I'm not thinking about cancellation. By taking measures to ensure safety and security, we are focusing on hosting the games," Hashimoto said at a press conference, when asked about the comments by LDP Secretary General Toshihiro Nikai. 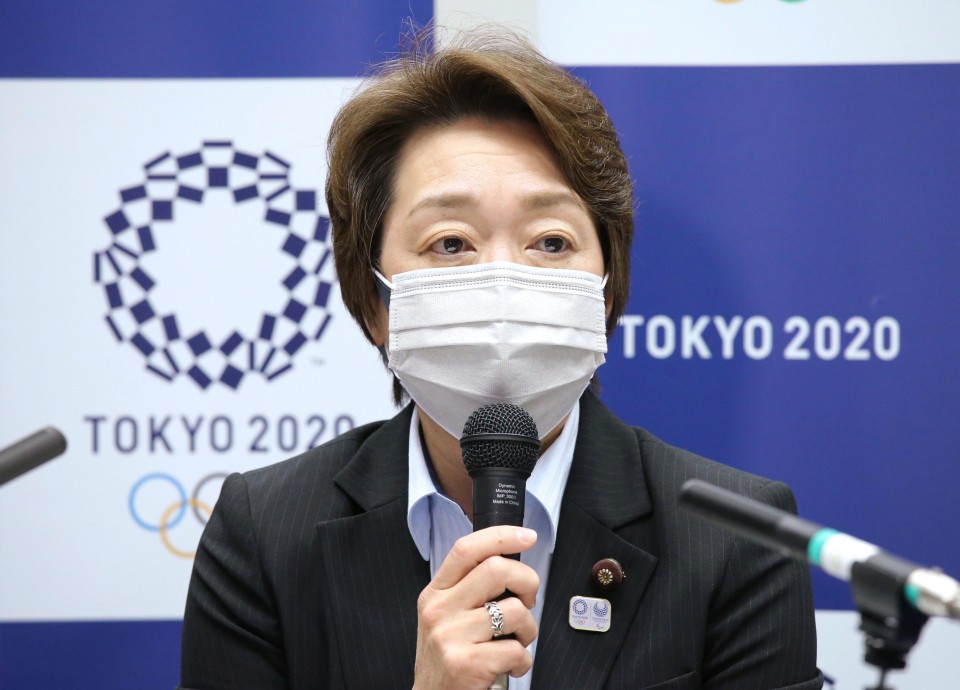 Seiko Hashimoto, president of the Tokyo Olympic and Paralympic organizing committee, attends a press conference in Tokyo on April 16, 2021, wearing a mask amid the coronavirus pandemic. Hashimoto denied any possibility of canceling the postponed games, despite a recent sharp rebound in coronavirus infections in the capital and elsewhere in Japan. (Pool photo) (Kyodo) ==Kyodo

Nikai, the No. 2 ranking member of the ruling party led by Prime Minister Yoshihide Suga, said, "If it's impossible, then it should be called off."

"What is the point of the Olympics if it's responsible for spreading infections? We will have to make a decision at that point," he said while recording a TV program on Thursday.

Hashimoto, a seven-time Olympian, said listening to Nikai's remarks had a "sobering effect" on her.

"With thorough safety measures, we will continue to make efforts toward staging the games," she said.

The number of daily COVID-19 cases in Japan has again been surging, with health experts warning that a "fourth wave" of infections, driven by the emergence of coronavirus variants, is putting more and more strain on the country's medical system.

The organizing committee has already been forced to change the format of the Olympic torch relay in some areas in response to the spike in infections, less than a month after the nationwide event started in an attempt to boost enthusiasm for the games.

On Friday, the organizing body said the relay will not run on public roads in the main island of Okinawa during the two-day leg in the southern prefecture from May 1, in response to a request from the local planning committee.

The torchbearers who were scheduled to carry the Olympic flame in the main island will instead run around a city hall or a park, the two days' final destinations, but with no spectators, according to the organizing committee.

At Friday's press conference, Hashimoto said the committee must be "flexible" in addressing the issue of how many spectators will be allowed to enter Olympic venues.

But it remains uncertain whether competitions can be held in front of spectators at all.

Taro Kono, minister in charge of Japan's vaccine rollout, said Thursday the games will be held in "whatever way is possible and that may mean there will possibly be no spectators."

The Japanese government and other organizing bodies have already decided to hold the Tokyo Olympics and Paralympics without overseas spectators.

She said the organizing bodies will come up with a policy regarding the maximum capacity at venues this month, but the final decision will likely be made later after closely monitoring the infection situation.

With less than 100 days to go until the opening ceremony of the Olympics, public support in Japan remains low over the hosting of the games amid the pandemic, with 39.2 percent of respondents in a recent Kyodo News poll saying they should be canceled and 32.8 percent saying they should again be rescheduled.

Hashimoto said the success of the games depend on whether the committee can ensure safety for everyone, including athletes and spectators.