Tokyo reported on Thursday 1,027 new coronavirus infections, the highest daily level since Jan. 28, while the capital and three western prefectures have been under the country's third state of emergency since the beginning of this week.

The resurgence of the COVID-19 pandemic in the capital and other parts of Japan comes less than three months before the opening of the Tokyo Olympics. 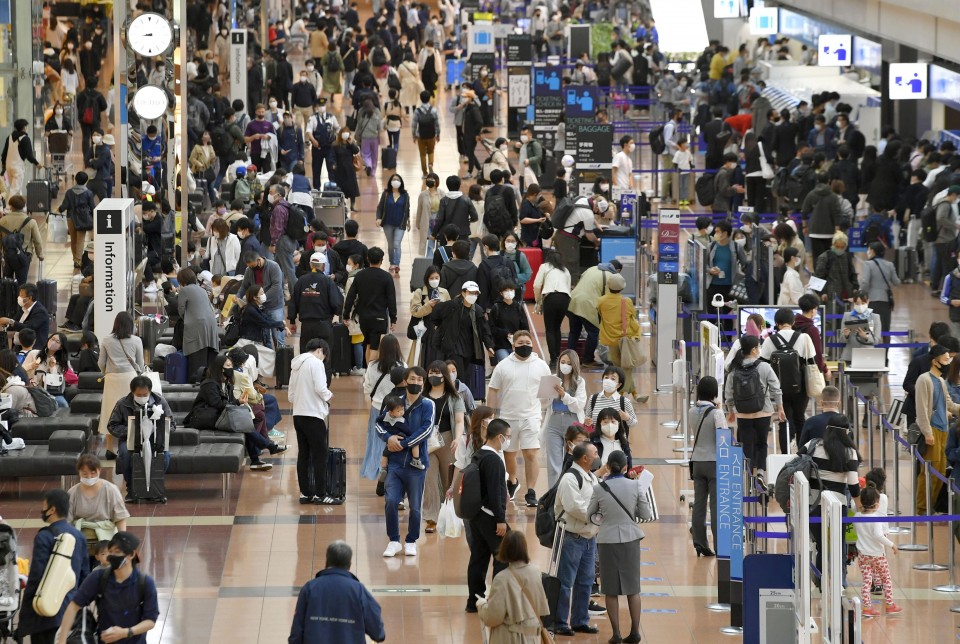 A departure lobby for domestic flights at Tokyo's Haneda airport is crowded with people on April 29, 2021. Japan's Golden Week holiday period started the same day while the capital, along with Osaka area, remains in a coronavirus state of emergency. (Kyodo) ==Kyodo

The seven-day rolling average of infections per day in Tokyo rose to 782.1, up 14.3 percent from the previous seven-day period, with the accumulated number of infections in the capital totaling 138,378.

The number of new infections in Tokyo had been on a declining trend from February to early March after hitting the highest level on Jan. 7 at 2,520. But it turned upward in mid-March.

"We have not been able to curb the movement of people. We urge residents to stay home as (more contagious) coronavirus variants are spreading," a Tokyo metropolitan government official said.

The nationwide tally of new infections also climbed to 5,918 the same day, the highest since the second state of emergency was completely lifted in late March.

By prefecture, Osaka confirmed the largest number of cases for the day at 1,172, with Hyogo trailing Tokyo at 534, followed by Aichi at 430 and Fukuoka at 337.

Tokyo, Osaka, Kyoto, and Hyogo prefectures have been under the state of emergency since Sunday through May 11, under which large commercial facilities, theme parks, movie theaters, karaoke establishments and restaurants serving alcohol have been asked to close.

The governors of Tokyo and three neighboring prefectures have urged residents to refrain from traveling to, from and within the metropolitan region ahead of the string of holidays in the country, called Golden Week, which began Thursday.