Japan PM Suga heads to U.S. for talks with Biden, with China high on agenda

Japanese Prime Minister Yoshihide Suga headed to Washington on Thursday for a summit with U.S. President Joe Biden to strengthen the bilateral alliance and affirm coordination over the coronavirus pandemic and an increasingly assertive China.

The summit on Friday will be Biden's first in-person meeting with a foreign leader since he took office in January. The two leaders are expected to discuss efforts to realize a free and open Indo-Pacific region, the pandemic response, climate change and North Korea among other issues. 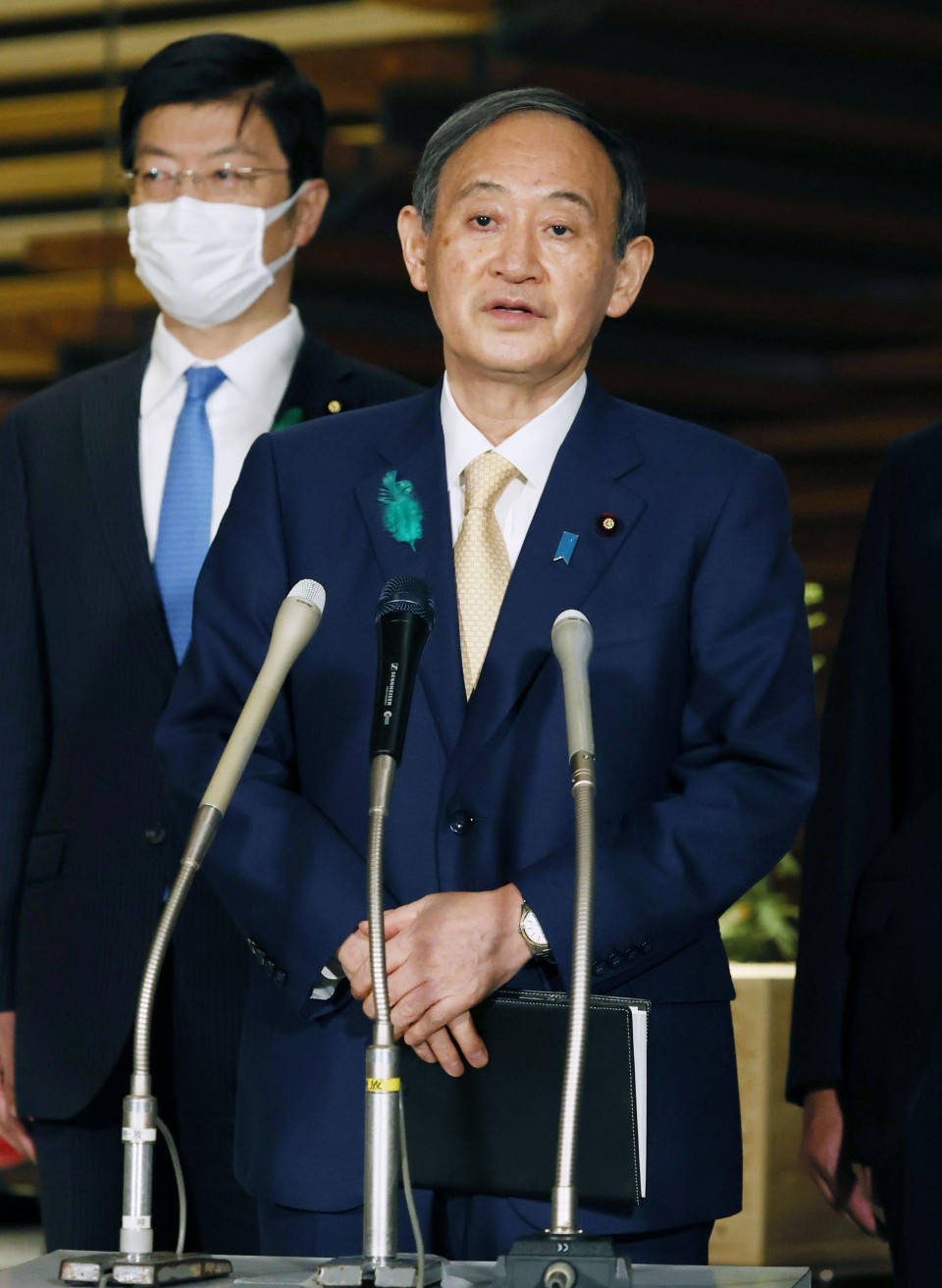 Prime Minister Yoshihide Suga speaks to reporters in Tokyo on April 15, 2021, before he leaves for the United States. (Kyodo)

"I look forward to forming a relationship of trust with President Biden and to fortifying our alliance, which represents the universal values of freedom, democracy, human rights and the rule of law," Suga told reporters at his office before departing.

"We will demonstrate to the world the leadership of our two countries toward a free and open Indo-Pacific," he said.

In Washington, White House Press Secretary Jen Psaki said the fact that Biden's first face-to-face bilateral meeting will take place with Japan "emphasizes our important relationship and all of the cooperative work we have to do together."

"I will say that, of course, our approach to China and our shared coordination and cooperation on that front will be part of the discussion," she added, speaking at a press conference.

In commentary published in The Wall Street Journal ahead of the trip, Suga stressed his focus on green policies and digital transformation, and also said he hopes to work with the United States to "hone our competitive edge in digital technologies and emerge as front-runners in the global digitalization race."

Chief Cabinet Secretary Katsunobu Kato called the alliance with the United States "the cornerstone of Japan's diplomacy and security" and said at a regular press conference the trip is aimed at conveying the "strong Japan-U.S. relationship to the world."

The two leaders are expected to release a joint statement expressing their deep concern about human rights violations in China and affirming the Senkaku Islands in the East China Sea, which are controlled by Japan but claimed by China, fall under the scope of a Japan-U.S. security treaty, according to Japanese government sources.

China has been increasingly assertive in the Indo-Pacific region, including around the Senkaku Islands and in the South China Sea, where Beijing has militarized areas in which it has overlapping claims with smaller neighbors.

The prime minister may seek additional supplies of Pfizer's coronavirus vaccine, with Japan's coronavirus inoculation campaign progressing slowly compared with the United States and Europe. The two-dose vaccine is the only vaccine approved in Japan so far.

Suga will return to Japan on Sunday.

Japan had initially said the summit would take place in the first half of April, with some government sources suggesting it was being arranged for April 9, but it was pushed back by one week as the Biden administration focuses on dealing with COVID-19.

It will be the second foreign trip for Suga since taking office last September, following visits to Vietnam and Indonesia in October.

Suga and his entourage have all received COVID-19 vaccinations prior to the trip.

The Japanese government has been eager to arrange a meeting between the two leaders as soon as possible. They agreed on holding one during telephone talks in January.