Toronto Raptors forward Yuta Watanabe has signed a standard NBA contract, the club said Monday, enabling the Japanese to make an unlimited number of appearances for the top team this season after he joined on a two-way contract in December.

The 26-year-old Watanabe spent the past two seasons at the Memphis Grizzlies, also on a two-way contract, which allows a player to play a limited number of games for a top team while also playing for its affiliate. 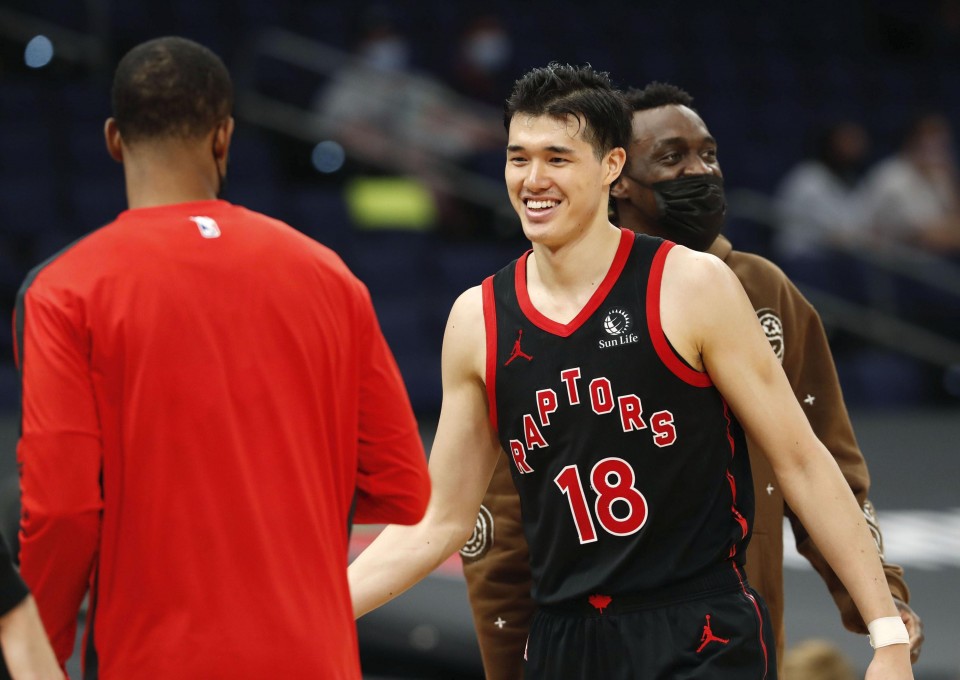 Yuta Watanabe (18) of the Toronto Raptors high fives a teammate during the game against the Oklahoma City Thunder on April 18, 2021, in Tampa, Florida. (NBAE/Getty/Kyodo)

The 206-centimeter Kagawa-native has so far averaged 4.0 points, 3.3 rebounds and 13.4 minutes in 39 games for the Raptors in the NBA, making one start.

On Sunday, Watanabe followed his NBA career-high scoring outburst with another personal milestone, scoring in double digits for a third straight game as the Raptors beat the Oklahoma City Thunder 112-106.

The forward chipped in 10 points to go with four rebounds and four assists in 29 minutes off the bench at Tampa's Amalie Arena, shooting 3-for-6 from the field, including 1-for-2 from deep.

The double-digit scoring streak is the longest of Watanabe's three-year NBA career and includes his career-best 21 points in a win against the Orlando Magic on Friday.

Forward Chris Boucher led all scorers with 31 for the Raptors, who improved to 24-34 with their third win in a row.