Newly crowned Masters champion Hideki Matsuyama said Wednesday the significance of becoming the first golfer from Japan to win a men's major title has been sinking in since returning to the country.

The 29-year-old, who survived a dramatic final round at Augusta National Golf Club to claim the famous green jacket on Sunday, arrived home Tuesday to a nation still reveling in his historic victory. 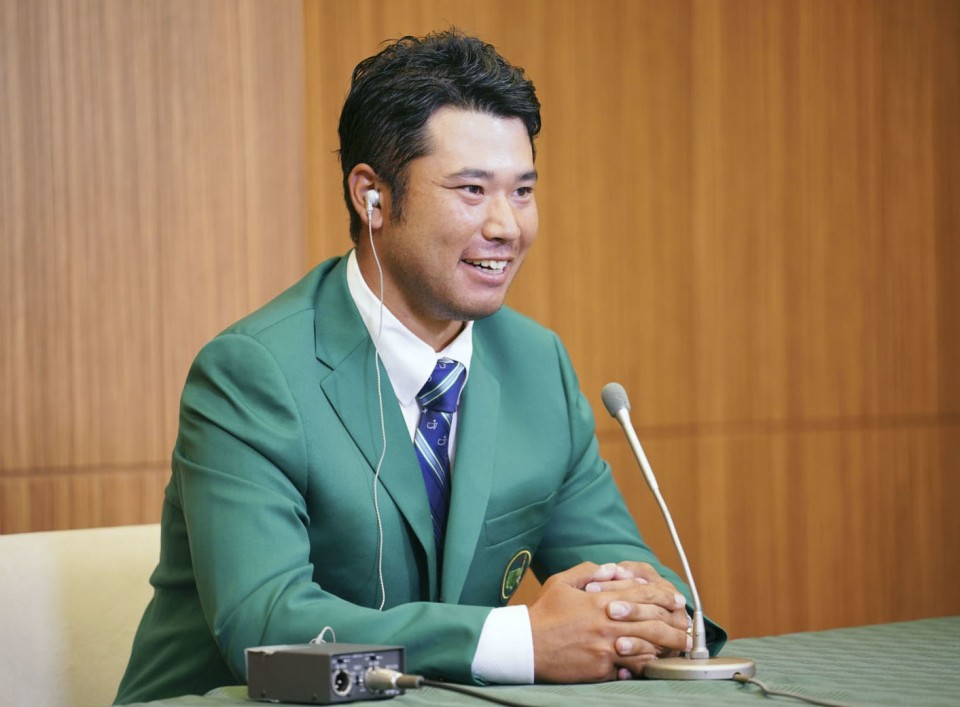 Supplied photo shows Hideki Matsuyama holding an online press conference after returning to Japan following his victory at the Masters, on April 14, 2021. (Kyodo)

"Seeing so much about it in the news after returning to Japan, it feels like I've done something special," said Matsuyama, who held an online press conference while undergoing quarantine to stop the spread of the coronavirus.

Prime Minister Yoshihide Suga was among a host of prominent Japanese to voice their congratulations as news of Matsuyama's win dominated the airwaves.

The Masters triumph fulfilled Matsuyama's long-held goal of winning one of the four annual majors, 10 years after he debuted at the tournament as a 19-year-old amateur.

"I'm really tired. For the first time ever, I don't want to swing a club," said Matsuyama, who tends to be intense on the course.

"Winning has turned everything leading up to this into a good memory. I've slammed my club before, but I want to be careful not to do that."

Donning the champion's green jacket for the press conference, Matsuyama said he had kept the distinctive garment with him since receiving it in a presentation from 2020 winner Dustin Johnson.

Asked if he had worn it back from the United States, Matsuyama said, "(No), but I do want to always have it with me."

The native of Ehime Prefecture on the island of Shikoku is likely to return to the tour in the United States next month but intends to savor his victory before making any future plans.

"I'm still feeling a lot of new emotions. I'm not really at the stage where I'm ready to set my next goal, so right now I just want to enjoy the moment a little longer while playing some golf," said Matsuyama, whose six PGA Tour wins, including the Masters, are the most by any Japanese player.

Matsuyama has three more majors this season with the PGA Championship in May, the U.S. Open in June and the British Open in July.

He is also likely to be among the favorites for a medal on home soil at this summer's Tokyo Olympics, which have been postponed for a year because of the coronavirus.

It will be Matsuyama's first Olympics. He and a few other top men's golfers declined to play in Brazil in 2016, when the Zika virus was a concern.

"If (the Olympics) can be held safely, I want to try my hardest to win the gold medal," Matsuyama said.