A Chinese Foreign Ministry spokesman on Wednesday rejected Japan's request to delete from his Twitter account a parody picture of an "ukiyo-e" work to criticize its decision to release treated radioactive water from the Fukushima power plant into the ocean.

On Monday, Zhao Lijian posted a collage picture of a piece in the popular "Thirty-six Views of Mt. Fuji" series by Japanese ukiyo-e master Katsushika Hokusai (1760-1849), prompting the Japanese Foreign Ministry to lodge a protest with China.

The picture "reflects Chinese people's concern and dissatisfaction with the Japanese government's unilateral decision" about the "Fukushima nuclear-contaminated water," Zhao, known as one of Beijing's hard-line diplomats, told reporters.

Zhao added that the picture "reflects legitimate public opinion and justice. It is the Japanese government that needs to revoke the wrong decision and apologize."

He said in his Twitter post, along with the picture, "If Katsushika Hokusai, the original author is still alive today, he would also be very concerned about #JapanNuclearWater." 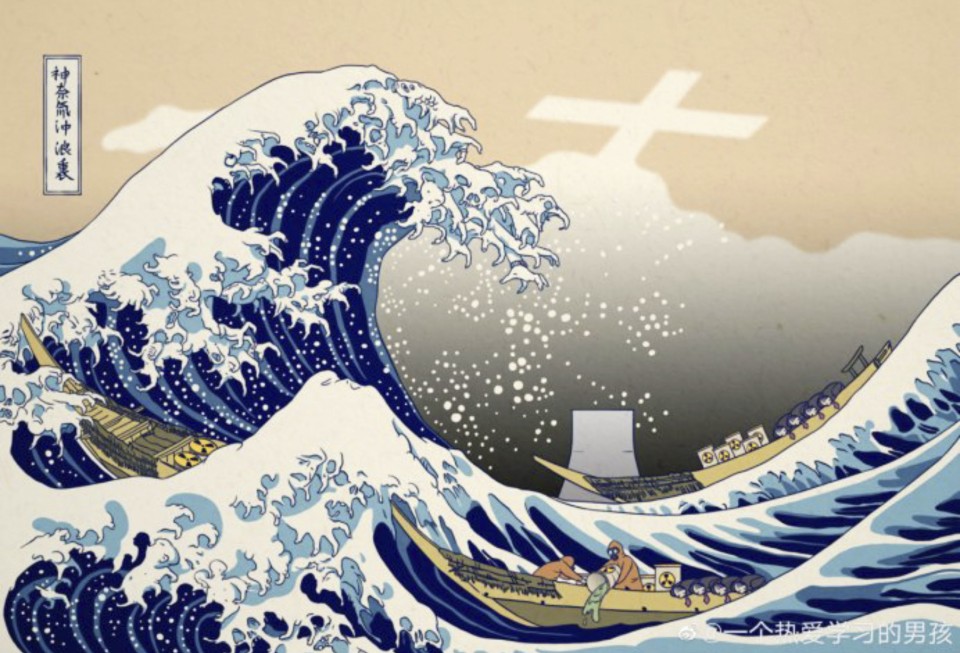 The parody picture, believed to be collaged by a Chinese illustrator, depicts a person who wears an orange protective suit on a boat pouring deep green liquid from a bucket into the sea. Mt. Fuji is replaced by what appears to be a nuclear power plant.

Japan's Foreign Minister Toshimitsu Motegi said at a parliamentary session on Wednesday that Zhao's post, which insults Japanese culture, is "mindless." His ministry said it called on China, through diplomatic channels Tuesday, to delete it.

In the past, Zhao also came under fire from some other countries after he tweeted that the novel coronavirus was brought by the U.S. army to the central Chinese city of Wuhan, the original epicenter of the pandemic.

On April 13, Japan decided to begin releasing the treated water into the sea from the crippled Fukushima Daiichi nuclear power plant in two years, a major development after years of discussions on how to deal with the water used to cool down melted fuel there.

In addition to China, Japan's neighbors, South Korea and Taiwan, have expressed opposition to the nation's latest decision, claiming that the treated water would hurt the marine environment, food safety and human health.

Japanese officials, meanwhile, argues other countries operating nuclear power plants, such as China and South Korea, have released treated radioactive water from reactors there into the environment.