Shohei Ohtani delivered a clutch eighth-inning home run Sunday to spur the Los Angeles Angels to a 4-2 win over the Houston Astros.

The two-way star led off the eighth against right-hander Luis Garcia (0-2) with a shot that flew 440 feet (134 meters) over right center field and gave the Angels a 3-2 lead in the American League battle at Houston's Minute Maid Park. 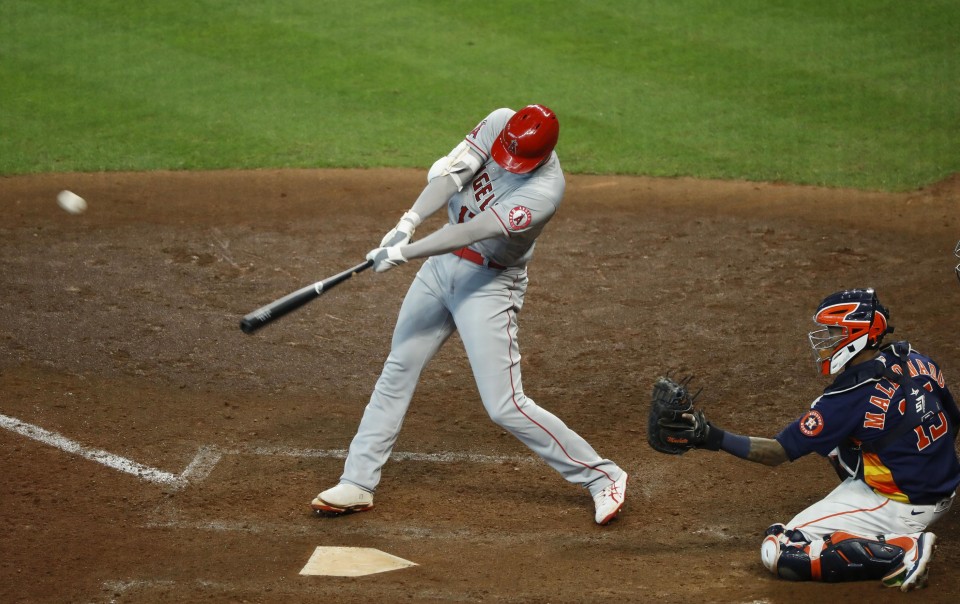 Shohei Ohtani hits his seventh home run of the season for the Los Angeles Angels in the eighth inning of an American League game against the Houston Astros at Minute Maid Park in Houston on April 25, 2021. (Kyodo)

The homer, his seventh of the season, gave Ohtani long bombs in back-to-back games and helped the Angels avenge a 16-2 loss to Houston the previous day.

"With the game tied, I was just thinking about getting on base. I'm glad it flew (off the bat) nicely," said Ohtani, who has homered in three of his past five games.

"I'm not seeing the ball too badly and I've had good at-bats overall the past few games."

According to MLB.com, Ohtani's blast was his second to fly 440 feet or more this season. Only his teammate, three-time AL MVP Mike Trout, with three, has done it more times this year.

The Angels took the lead on a two-RBI single from David Fletcher in the top of the fifth before Yuli Gurriel tied the game with a two-run homer in the seventh.

Righty Chris Rodriguez (1-0) got the win for a scoreless inning of relief after starter Dylan Bundy threw six innings of three-hit, two-run ball.

The victory improved the Angels' record to 10-10 after Saturday's loss had pushed the club under .500 for the first time this season.

Following his game-winning performance with the bat, Ohtani is slated to make his third start of the season on the mound Monday against the Texas Rangers.

Manager Joe Maddon said he has not yet decided whether Ohtani will also feature in the batting lineup and will make the call based on the health of the injury depleted Angels roster.