Tokyo Gov. Yuriko Koike on Wednesday pledged to suppress the spread of the coronavirus in the Japanese capital to ensure a safe Olympics as it quietly marked 100 days to go until the global sporting event.

"I sincerely look forward to seeing all athletes from Japan and abroad, who have been training very hard, staging a wonderful games by holding the event with everyone in 100 days from now," Koike said at a ceremony at the metropolitan government building.

Her comments came as Tokyo experiences a renewed surge in coronavirus infections, with many questions still remaining over how the Olympics can open on July 23 amid the global health crisis. 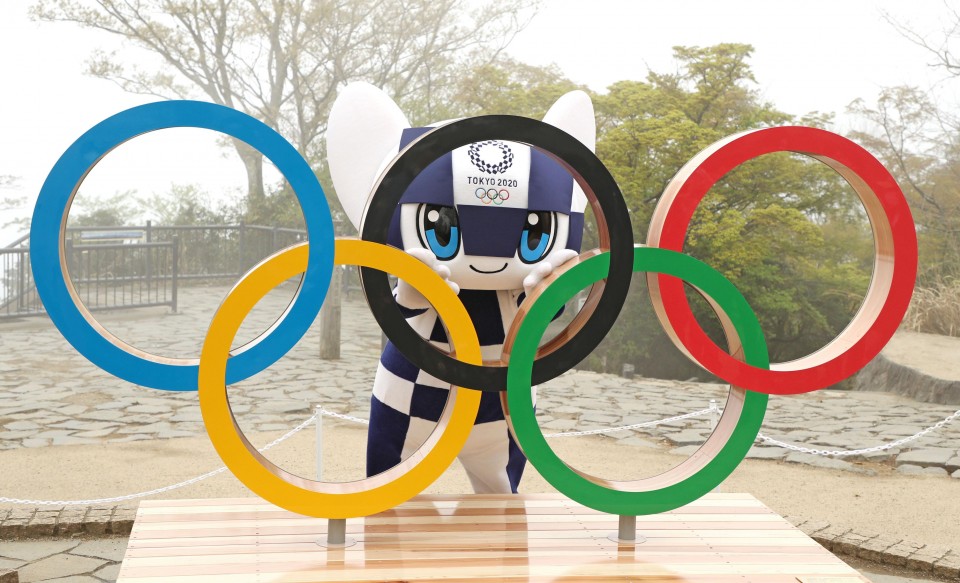 Tokyo Olympics mascot Miraitowa poses for a photo with an Olympic rings monument erected on the summit of Mt. Takao in Tokyo's Hachioji on April 14, 2021. (Pool photo)(Kyodo)

Japanese organizers and the International Olympic Committee have vowed to prioritize safety at the Tokyo Games, which were postponed in March last year. But the public continues to be skeptical about the roughly two-week event with the pandemic far from over and the vast majority of people in Japan not yet vaccinated.

The Japanese government was forced last week to designate the capital as requiring stronger COVID-19 measures, with the move coming less than a month after a state of emergency over the virus was lifted.

Tokyo on Wednesday confirmed another 591 daily cases of infection, the highest number since the end of the second emergency on March 21. Across Japan, more than 4,000 cases were reported for the first time since Jan. 28, as highly contagious variants are spreading in several parts of the country.

Koike said that the current quasi-state of emergency until May 11 will be a "crucial period" to "win the battle against the coronavirus" before hosting the Olympics.

Two low-key ceremonies were held in the morning to celebrate the milestone, but neither was advertised to the public beforehand to prevent people from gathering.

Statues of the two Tokyo Games mascots were unveiled at the metropolitan government building, while an Olympic rings monument was erected on the summit of Mt. Takao, a popular hiking destination on the outskirts of the capital, in foggy weather. 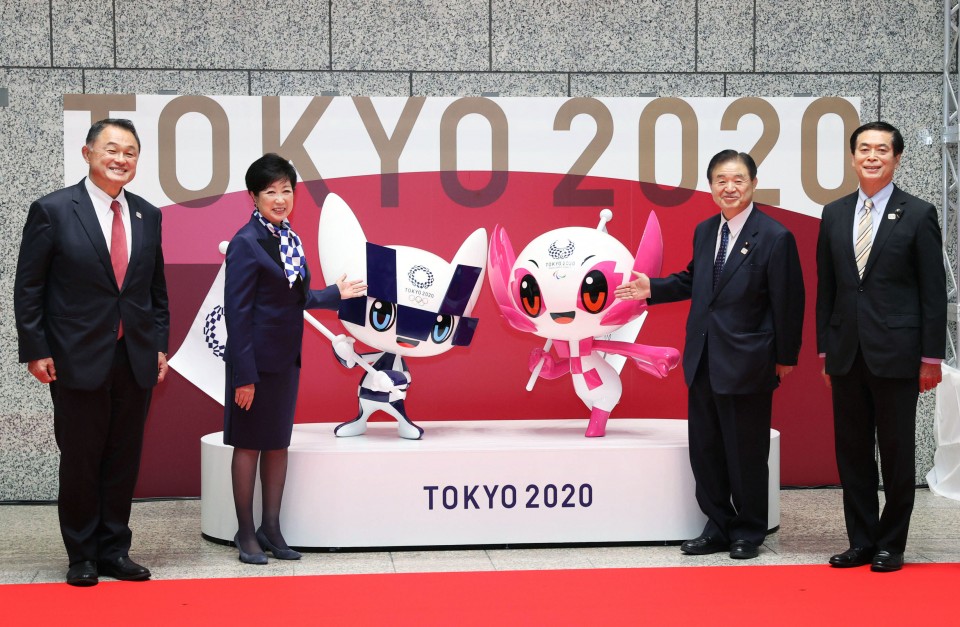 Tokyo Gov. Yuriko Koike (2nd from L), Japanese Olympic Committee President Yasuhiro Yamashita (L) and others pose for a photo during a ceremony to unveil statues of the Tokyo Olympics and Paralympics mascots -- Miraitowa (L mascot) and Someity -- at the Tokyo metropolitan government headquarters on April 14, 2021, exactly 100 days before the July 23 opening of the Olympics. (Pool photo) (Kyodo) ==Kyodo

The National Stadium, which is the main Olympic venue that will hold the opening and closing ceremonies, and the iconic Tokyo Sky Tree, a 634-meter tower, were among the landmarks that were lit up in the five colors of the Olympic flag in the evening.

John Coates, who chairs the IOC's coordination commission that monitors preparations for the Olympics, expressed confidence they will go ahead this summer.

"Tokyo...is ready. Over the next 100 days, we will finalize necessary countermeasures," he told reporters in an online press conference, while emphasizing that the organizers will be "prepared for the worst situation."

But they have been struggling to turn public opinion in Japan back in favor of the Olympics. A Kyodo News survey released Monday showed only 24.5 percent believe the games should go ahead this summer.

The nationwide torch relay that started March 25 has lacked a festive atmosphere and indicates how difficult it is to organize a major event during the global health crisis.

The two-day leg in Osaka Prefecture through Wednesday was rerouted off public roads following record numbers of COVID-19 cases, with torchbearers running in an empty park instead.

The Olympics will feature over 10,000 athletes from around the world competing in a record 33 sports. But to prevent the spread of the virus, the event is set to look completely different from a typical Summer Games.

Due to fears that the Olympics could become a global super-spreader event, spectators from overseas will not be allowed to attend, and competitions are expected to be held in front of a limited number of people living in Japan. 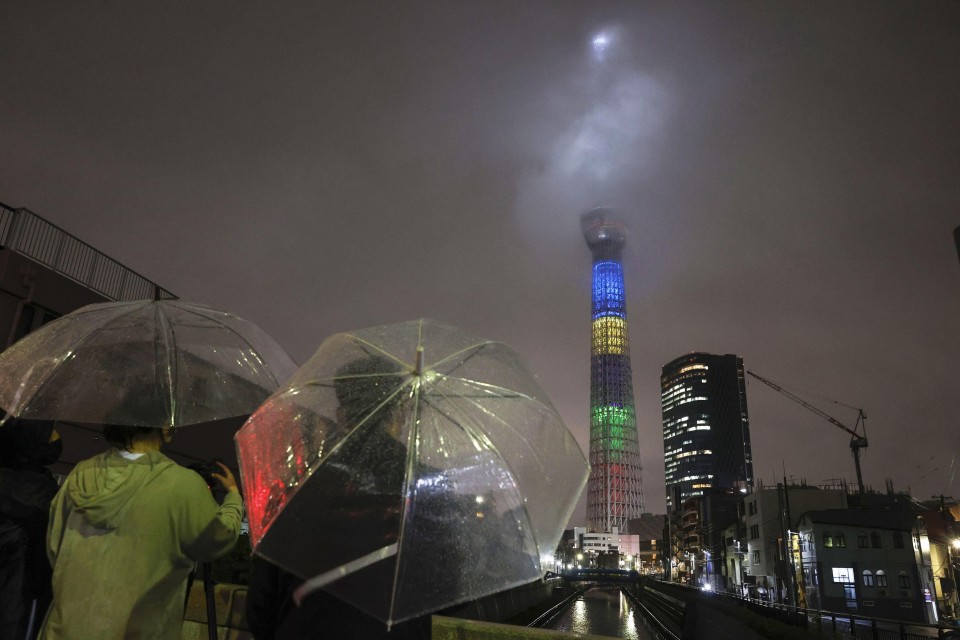 A countdown board for the Tokyo Olympics in front of JR Shimbashi Station in the capital shows on April 14, 2021, 100 days to go until the July 23 opening of the event. (Kyodo) ==Kyodo

Meanwhile, athletes will be tested for the virus regularly, while they will only be allowed to travel to their venues and other limited locations using designated vehicles, unless given special permission.

"Certainly, it's not a case of everyone just being positive, but personally I really feel many people gain courage through athletes' efforts," said Rikako Ikee, a Japanese swimming star who is set to compete in two Olympic events, less than three years after being diagnosed with leukemia.

According to the IOC, over 65 percent of Tokyo Olympic berths have been filled. Some of those remaining qualifiers will double as test events at venues in the host city.

This month, the Tokyo Games organizing committee held its first test event since the one-year postponement caused by the pandemic. It will also release the second version of its "playbook," rules of conduct and COVID-19 guidelines for athletes, officials and stakeholders involved with the Olympics and Paralympics.

Japan has logged over 517,000 infections and about 9,500 deaths due to the coronavirus, both figures lower than most major economies. But Tokyo's total confirmed cases of more than 127,000 are by far the highest among regions in the country.

After the Olympic closing ceremony on Aug. 8, the Paralympics will be held in the capital from Aug. 24 to Sept. 5.