Amid concerns over the increasing use of such devices and their potential impact on children's health, the ministry will conduct the nearsightedness survey on 9,000 students -- ranging from first-graders in elementary school to third-year junior high school students -- in May and June. 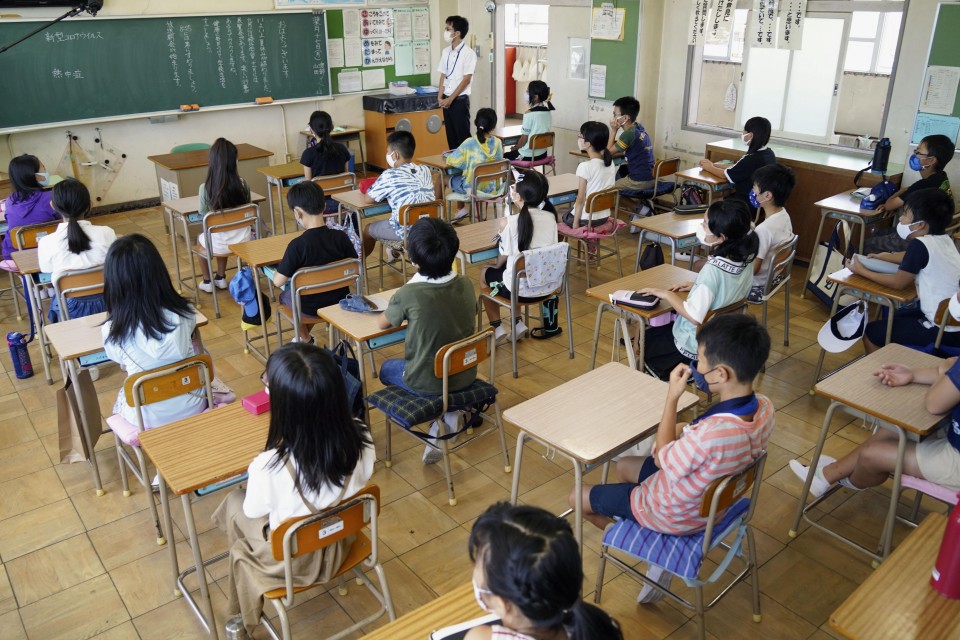 Students attend a class at an elementary school in Nagoya, central Japan, on Aug. 17, 2020. (Kyodo)

The Ministry of Education, Culture, Sports, Science and Technology aims to come up with effective measures to protect children's eyes, as pathological shortsightedness can develop into serious diseases with a risk of the loss of sight in later life.

According to the ministry, the rate of students with uncorrected visual acuity worse than 20/20 vision rose to record highs -- 34.57 percent for elementary school children and 57.47 percent for junior high school students -- in school health statistics for fiscal 2019.

Many were believed to have suffered from myopia but it was difficult to carry out detailed exams at schools, the ministry said.

Research data also suggested over 70 percent of elementary school students in Tokyo have myopia. The condition could lead to serious problems such as glaucoma and retinal detachment in adulthood.

During the upcoming survey, medical technologists will measure the axial lengths of 9,000 students. The axial length, or the distance between the anterior and posterior poles of the eye, is usually elongated in cases of myopia.

Students will also be asked how much time they spend using a smartphone and how often they take part in outdoor activities in the survey, which will be conducted in cooperation with the Japan Ophthalmologists Association.

The government's plan to provide one digital device, such as a tablet, per elementary and junior high school student is set to be complete at most of the schools soon, and digital textbook use at schools is expected to increase.

"We would like to push forward measures for protecting children's eyes based on the results of the survey, by formulating proper rules and enhancing outdoor activities (of students) among other things," said a ministry official.

Kyoko Ono, president of the Japan Myopia Society, pointed out that children not having the opportunity to look at things in the distance and not being exposed to sunlight, on top of staring at screens for extended periods, during the coronavirus pandemic may have led to increased myopia among children.

Effective ways to prevent myopia include keeping books or screens at least 30 centimeters from the eyes, looking at something in the distance every 20 minutes or so, and engaging in outdoor activities for at least two hours a day, according to Ono, a professor at Tokyo Medical and Dental University.