About 60 family members of former leprosy patients in South Korea will soon apply for compensation money over discrimination and prejudice they suffered under Japan's decades-long policy of isolating the patients, a source familiar with the move said Sunday.

Six family members of former patients in Taiwan have filed such applications with the Japanese government, the source told Kyodo News.

It marked the first time that such applications from abroad have come to light. 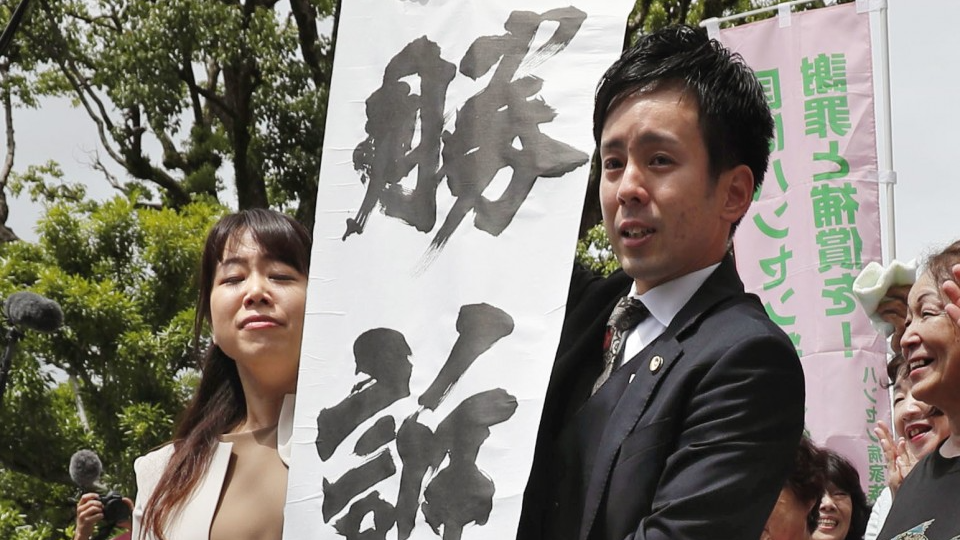 Lawyers hold a banner reading "Victory" in front of the Kumamoto District Court in southwestern Japan on June 28, 2019, as the court orders the government to compensate the families of former leprosy patients who also suffered discrimination due to its decades-long segregation policy. (Kyodo) ==Kyodo

Their actions are in line with a 2019 Japanese law regarding compensation for families of former leprosy patients, including those who lived in Taiwan and the Korean Peninsula, both of which were under Japanese colonial rule during and before World War II.

The patients suffered discrimination as they were isolated in sanatoriums in the island and the peninsula under the Japanese government's segregation policy dating back to 1931.

The actions also come as this year marks the 20th anniversary of a landmark ruling in which the Kumamoto District Court in southwestern Japan ordered the government to pay a total of 1.82 billion yen ($16.7 million) in compensation to a group of more than 100 former leprosy patients.

The plaintiffs said the state violated their human rights, arguing they had limited freedom and many were sterilized or in some cases forced to have abortions.

According to the 2019 law, the government will pay 1.8 million yen each to parents, children and spouses of former leprosy patients in compensation for psychological distress.

Siblings, as well as nephews, nieces and grandchildren who resided with the patients will be paid 1.3 million yen each.

The law and a separate law to compensate former leprosy patients stipulate they are intended to "console" the victims and families.

Yasuyuki Tokuda, a lawyer who has been dealing with the compensation issue, said it is extremely rare for the government to compensate for Japan's acts during the colonial era.

"State-to-state relations with South Korea have now become chilly. But firm coordination with local people has made it possible to win state compensation (from Japan) for human rights infringements," Tokuda said.

"I would like many people to think about the significance of this (movement)," he said.