Quasi-emergency measures against COVID-19 officially commenced Monday in Osaka, Hyogo and Miyagi prefectures as part of efforts to stem a sharp resurgence in infections in the three areas.

The steps, effective for one month until May 5, include fines for restaurants and bars that ignore orders to shorten operating hours and requirements for customers to wear masks when patronizing establishments. 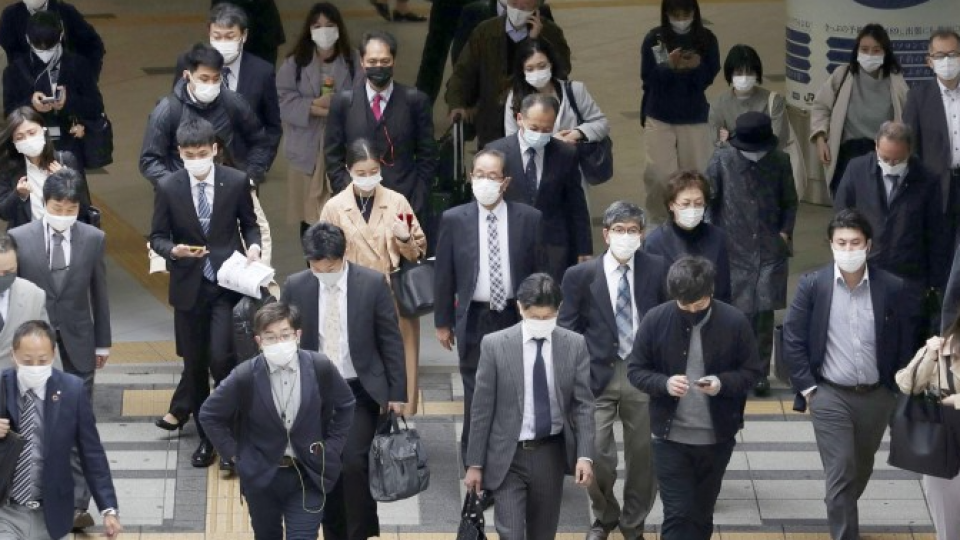 People wearing masks walk near JR Osaka Station on April 5, 2021, as quasi-emergency measures against COVID-19 officially commenced in six cities in Osaka, Hyogo and Miyagi prefectures as part of Japan's efforts to stem a sharp resurgence in infections in those areas. (Kyodo) ==Kyodo

The three prefectures are the first to be designated as being on the brink of a state of emergency under a revised law that took effect in February. Specifically, the city of Osaka and nearby cities of Kobe, Ashiya, Nishinomiya and Amagasaki in western Japan, as well as the city of Sendai in northeastern Japan are subject to the stronger measures. 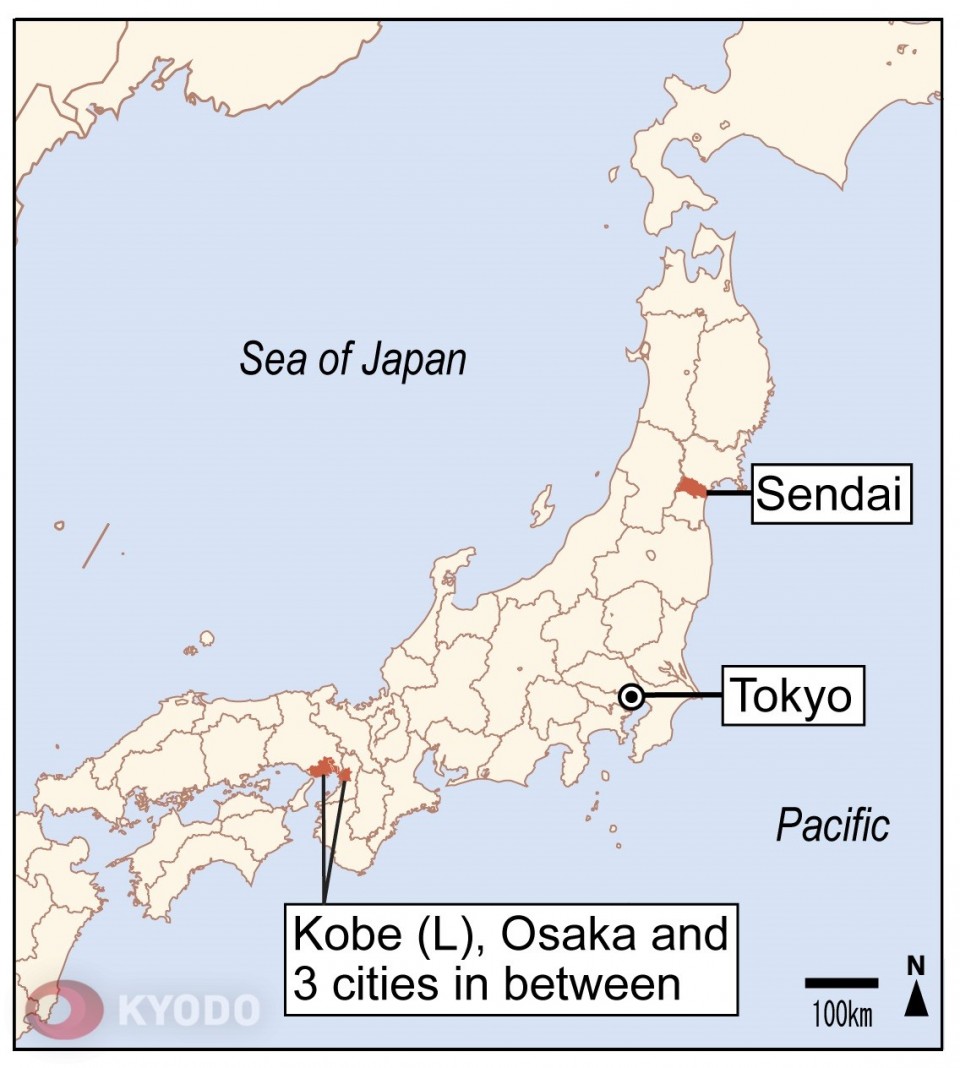 The designation comes as new infections in Osaka Prefecture continue to eclipse those in Tokyo, with the prefecture on Sunday confirming 593 new coronavirus cases after reporting a single-day record of 666 cases the previous day.

Osaka and Miyagi prefectures have reached Stage 4, the worst level on the government's four-point scale, for the volume of weekly infection cases per 100,000 people, while Hyogo stands at Stage 3, according to the health ministry.

At JR Sendai Station, a key terminal in the Miyagi prefectural capital, Naoto Kondo, who was visiting on a business trip, said he was too concerned about the level of infections to go out drinking after finishing work.

"I will return home as soon as my job is done," said the 54-year-old from Kanagawa Prefecture near Tokyo. 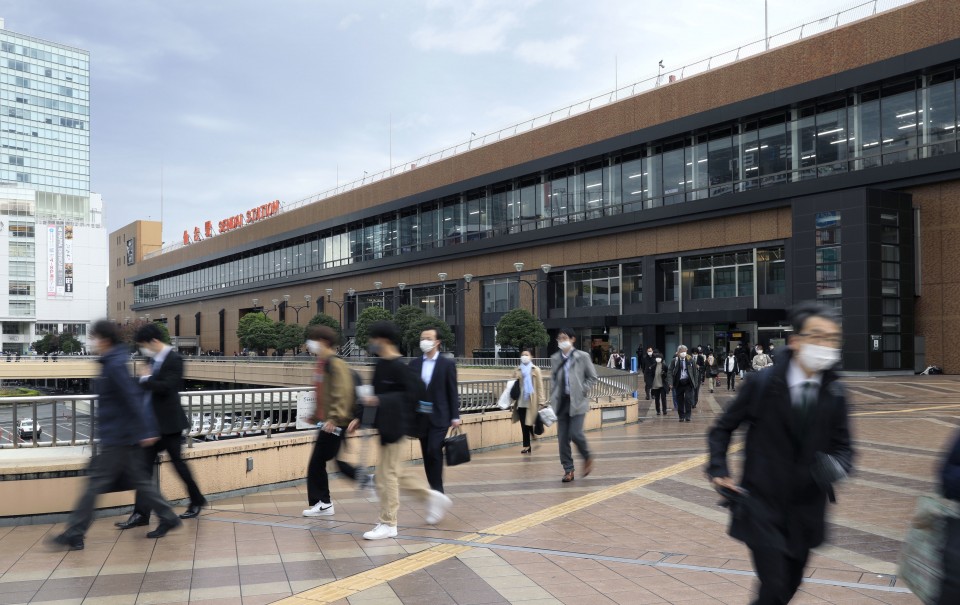 People wearing masks walk near JR Sendai Station in Miyagi Prefecture, northeastern Japan, on April 5, 2021, as quasi-emergency measures against COVID-19 officially commenced in six cities in Miyagi, Osaka and Hyogo prefectures as part of efforts to stem a sharp resurgence in infections in those areas. (Kyodo) ==Kyodo

Under the quasi-emergency measures, restaurants and bars in the six cities will be asked to close by 8 p.m. and could be slapped with a fine of up to 200,000 yen ($1,800) for noncompliance. They will also be asked to eject customers who refuse to cooperate and to install acrylic sheets to prevent droplet transmission.

Establishments that comply with the requests will be paid between 40,000 yen and 200,000 yen per day depending on their past sales. Authorities will increase monitoring to check that establishments are adequately carrying out prevention measures.

Around 40 prefectural and city officials attended a ceremony in Osaka on Monday evening to send off a patrol team that will check on the 40,000 establishments that have been issued with stickers certifying that they are carrying out measures against infection.

The prefectural government plans to outsource the patrols and increase personnel to 300 in the future, although some insiders have argued that more people should be sent to hospitals and public health centers instead.

In a parliamentary session on Monday, Prime Minister Yoshihide Suga stressed the need for thorough patrols, saying "There are no clever tricks when it comes to prevention measures."

The start of such patrols in Hyogo Prefecture, which apply to around 16,000 stores across four cities, was postponed due to insufficient preparation.

In the Umeda downtown district of Osaka city, Masakazu Nishimura, 60, who runs an "izakaya" Japanese-style pub, said his establishment had taken steps such as installing hand sanitizers and acrylic boards to prevent droplets transmission, and will start calling for customers to wear face masks from Monday. 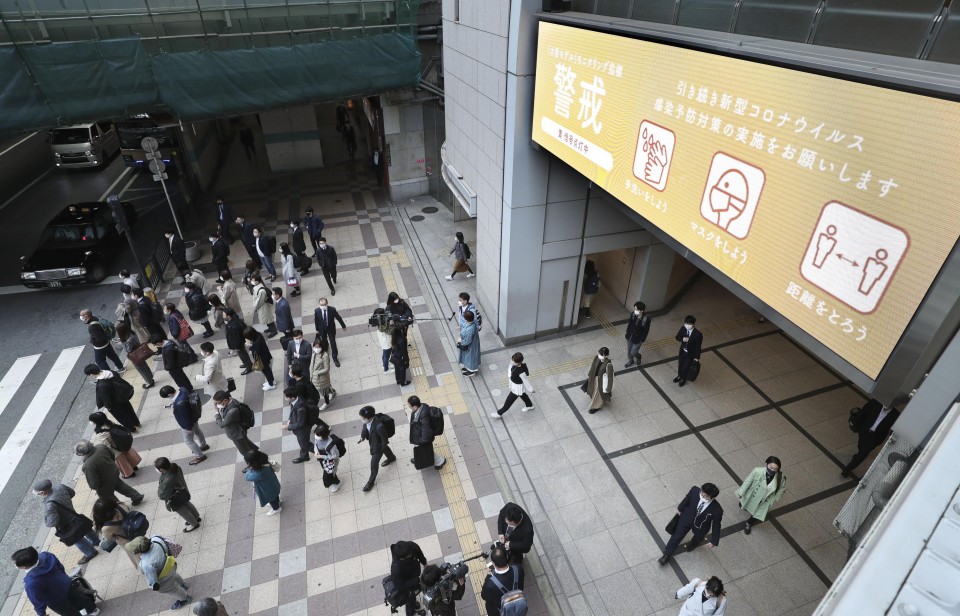 People walk under a signboard asking for coronavirus preventive measures in Osaka's Umeda area on April 5, 2021. Quasi-emergency measures against COVID-19 officially commenced the same day in six cities in Osaka, Hyogo and Miyagi prefectures as part of efforts to stem a recent sharp resurgence in infections there. (Kyodo) ==Kyodo

"Restaurants and bars are shouldering a risk as it costs a lot to take preventive measures," said the pub manager, adding he hopes customers will cooperate with the quasi-emergency steps.

Some local residents in the regions have also raised doubts about the efficacy of the new steps as people tire of taking anti-virus measures.

At JR Sannomiya Station at the center of Kobe, Tomomi Okawa, a 46-year-old nurse working for a care facility for the elderly, said, "I feel like authorities are leaving everything up to individuals' own efforts."

The 11th shipment, containing 1,989,000 doses on the assumption each vaccine bottle provides six shots, arrived from Belgium at Narita airport near Tokyo aboard an All Nippon Airways plane. ANA said it used a larger aircraft than on previous occasions.