Missing submarine with 53 aboard has sunk: Indonesia military

A submarine that went missing off Bali with 53 people aboard earlier this week has "sunk," the Indonesian military said Saturday, noting that debris believed to have come from the vessel has been found.

Search efforts for the KRI Nanggala-402 had been ongoing for several days since it disappeared early Wednesday, while oxygen supply in the vessel was feared to have run out early Saturday assuming that it had suffered a power outage. 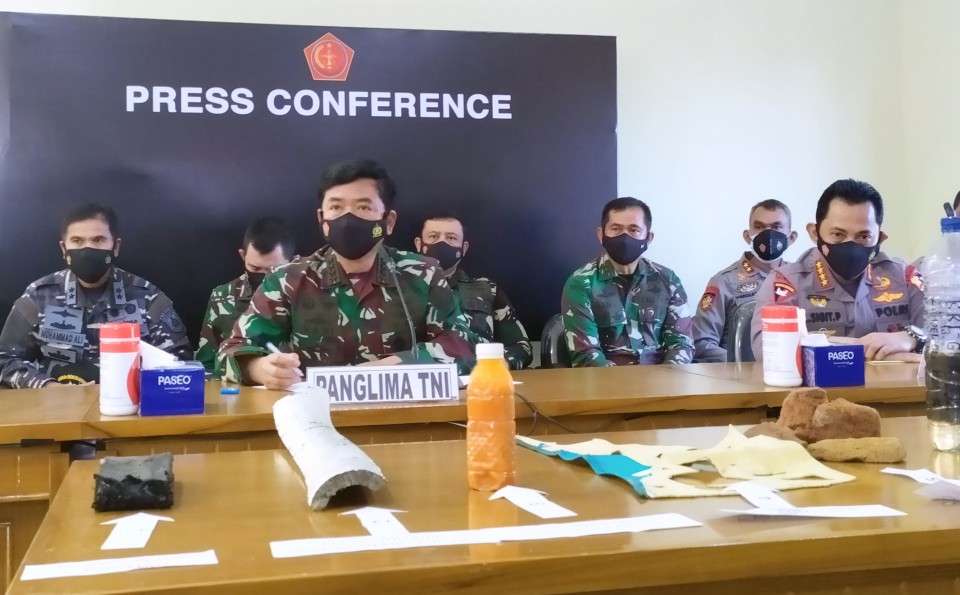 Indonesian military chief Hadi Tjahjanto (front L) speaks at a press conference in Bali, Indonesia on April 24, 2021 behind debris believed to be from the missing KRI Nanggala-402 submarine. (Kyodo)

"Since several days ago until today, we have found some debris around the location where the submarine was seen submerging that are believed to be components or parts of the submarine," Navy Chief of Staff Adm. Yudo Margono told a press conference.

Yudo said the submarine is likely to be at a depth of 850 meters, far below the depth of up to around 500 meters it is designed to withstand.

The navy chief of staff said the debris recovered included a prayer mat and a torpedo straightener.

"By these authentic pieces of evidence, we've raised the phase from sub missing to sub sunk," Yudo told reporters. "In the sub sunk phase, we are preparing for medical evacuation of possible survivors."

He also stressed that based on the evidence, the navy has not been able to determine if a blackout had occurred in the submarine when it sank, retracting his earlier statement that a blackout might have happened.

"If there was no blackout, oxygen supply could last for five days," the navy chief of staff said, adding that in a blackout condition, oxygen supply was feared to have run out early Saturday.

The German-made submarine went missing about 37 kilometers north of Bali on early Wednesday while preparing for a torpedo drill. Those on board were 49 crew members, one commander and three arsenal personnel.

An oil slick was later spotted from the air at the location where the submarine had submerged.

Ships and aircraft from Indonesia and other countries have been deployed in the search for the submarine, including an Australian frigate equipped with sonar capabilities. A U.S. surveillance plane has also joined the efforts.

Meanwhile, a hydro-oceanography warship equipped with a remotely operated vehicle has been on the site to locate the submarine.

The vessel is the oldest active attack submarine in the navy's submarine fleet of five. It was manufactured in 1977 in then West Germany and delivered to the Indonesian navy in 1981.