Toshiba Corp. President and CEO Nobuaki Kurumatani stepped down Wednesday, the company said, as a confrontation with activist shareholders and a recent buyout proposal by British private equity firm CVC Capital Partners are bringing the Japanese industrial conglomerate to a potential watershed moment.

Kurumatani, 63, a former chairman of CVC's Japan unit, offered to resign after having led the company's restructuring since 2018, Toshiba said. He did not join Chairman Satoshi Tsunakawa, who succeeded him, in an online press conference held after an extraordinary board meeting.

CVC's proposal to take Toshiba private, widely seen as being solicited by Kurumatani in a bid to fend off pressure from foreign investors calling for more transparent management, is opposed by some board members, sources close to the matter have said.

In the online press conference, Osamu Nagayama, chairman of Toshiba's board, said the management will closely review CVC's buyout offer after receiving a formal, more detailed plan, in a deal which values the Japanese firm at over $20 billion.

"CVC's initial proposal was very abrupt and lacks details," Nagayama said, adding, "Evaluation is not possible at this moment and quite a few things require careful consideration." 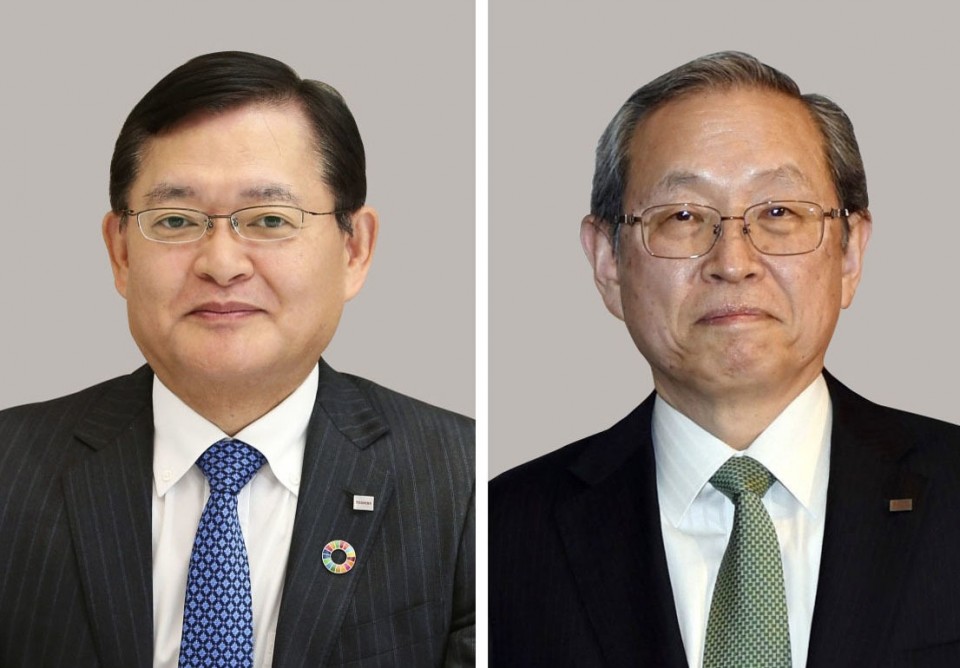 Combined file photo shows Toshiba Corp.'s Nobuaki Kurumatani (L) and Satoshi Tsunakawa. Kurumatani stepped down as president and CEO on April 14, 2021, and chairman Tsunakawa took up the posts of Kurumatani amid an internal conflict over a proposed buyout of the Japanese industrial conglomerate by Britain's CVC Capital Partners. (Kyodo) ==Kyodo

The purchase of Toshiba would require screening by the Japanese government for national security reasons because Toshiba's businesses include nuclear power and defense equipment.

Kurumatani has seen his support from shareholders dwindle. At the general shareholders meeting in July, 57.96 percent supported Toshiba's move to keep him in the post, down from 99.43 percent a year earlier, according to Toshiba.

He said in a statement he resigned because he needs some time off after having completed his task of turning around the company and helping it return to the Tokyo Stock Exchange's First Section in January after the demotion to the lower tier in 2017 following massive losses from writing off nuclear power businesses.

He did not make any reference to the CVC buyout plan.

"I would like to work on building trust with shareholders and other stakeholders," said Tsunakawa, who is in charge of negotiations with shareholders, adding he will basically maintain the company's current business strategy centering on an expansion of infrastructure businesses.

Tsunakawa served as Toshiba's president between 2016 and 2018, spearheading turnaround measures including raising 600 billion yen ($5.5 billion) in fresh capital to prevent delisting from the Tokyo bourse.

Tsunakawa will keep the position of chairman which he assumed in 2020, Toshiba said.

As for a delayed initial public offering of the Toshiba group's Kioxia Holdings Corp., a chipmaker formerly known as Toshiba Memory Holdings Co., Toshiba still plans to use a majority of expected proceeds to increase shareholder returns, Tsunakawa said.

The head of the Japanese operation of U.S. private equity fund Bain Capital, Kioxia's majority shareholder, said in November the planned IPO was delayed due to uncertainty surrounding the semiconductor industry at the time. Toshiba owns a 40.64 percent stake in Kioxia.

Toshiba has spent years trying to improve its governance and has undergone restructuring since an accounting scandal in 2015, followed by the bankruptcy of U.S. nuclear plant subsidiary Westinghouse Electric Co. two years later.