As Japan's foodservice industry tries to stay afloat amid the coronavirus pandemic, some restaurants have been looking to the start of the day to make up for revenue lost in curtailed evening trade, offering popular lunch and dinner items in a new breakfast service.

A restaurant located near Tokyo's bustling Shimbashi Station began serving a morning "yakiniku" grilled meat set for 500 yen ($4.6) in August last year, after its operator's sales dropped 40 percent in May from a year earlier, according to Morihisa Arimura, president of Yakiniku Like Ltd. 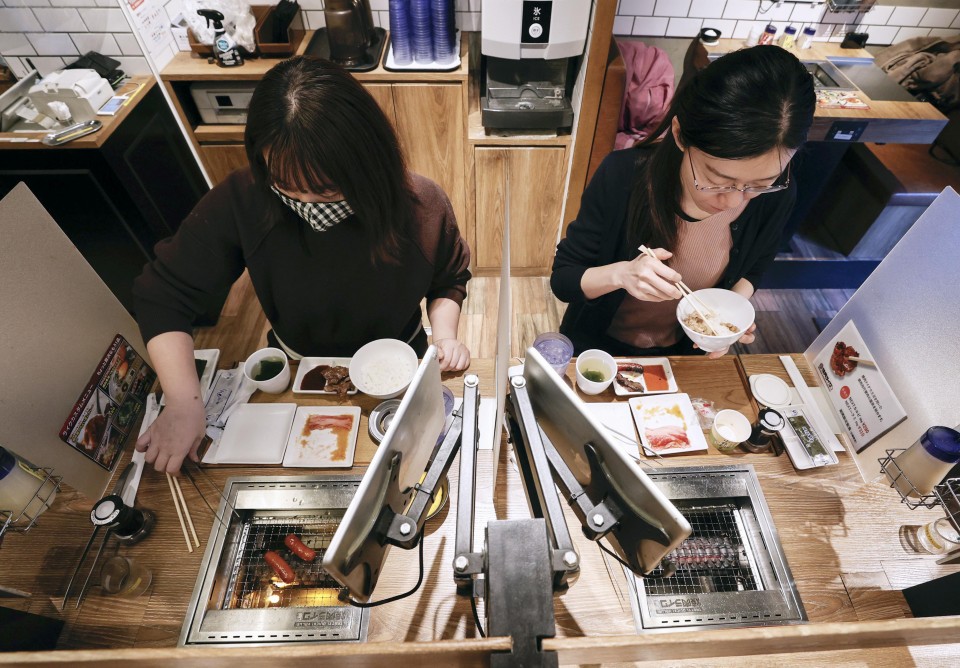 Photo taken on March 3, 2021, shows the breakfast service that has begun at a "yakiniku" grilled meat restaurant in Tokyo's Shimbashi district amid the coronavirus pandemic. (Kyodo)

Tokyo and some other prefectures remained under the first state of emergency declared over the pandemic for most of May as they were the last group in the country to end the "soft lockdown."

"Generally, the reactions of customers so far have been positive," Arimura said by email.

One of his customers, he says, told him that eating yakiniku for breakfast fits nicely into a modified lifestyle amid the pandemic of eating more in the mornings and less in the evenings.

Hiroaki Watanabe, a logistics analyst and television commentator, says that while Japan long differed from many other Asian countries in not having a culture of eating out in the morning, the new trend is likely to last even beyond the pandemic. 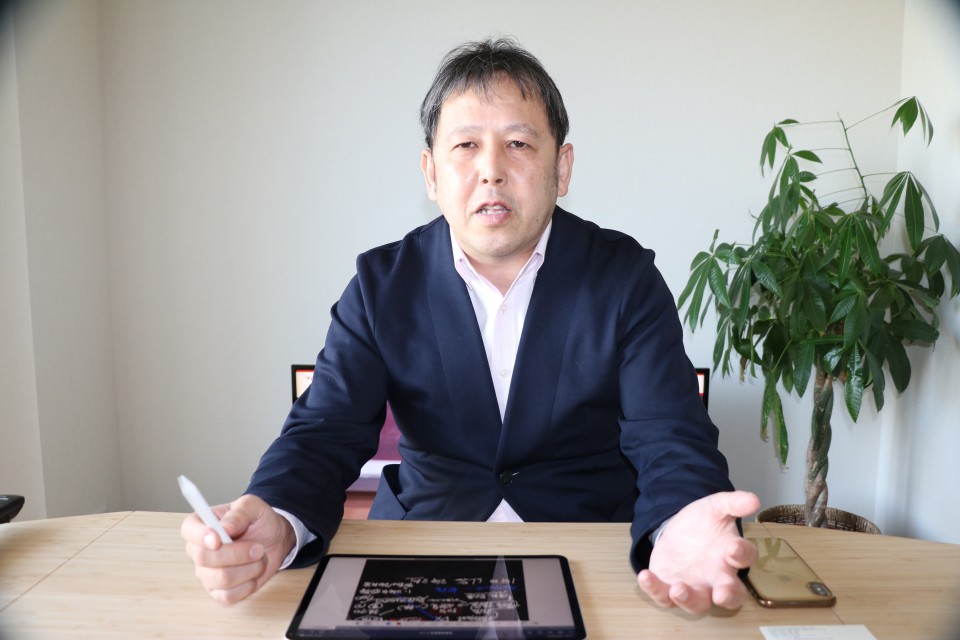 Hiroaki Watanabe, a logistics analyst and television commentator, gives an interview in Tokyo on March 17, 2021. (Kyodo)

In a recent interview, Watanabe said that along with yakiniku, sushi and even ramen noodles -- normally a popular item among bar-hopping denizens winding down their late-night drinking sessions -- are being served for breakfast.

Arimura said that morning menus have been contributing to the shop's earnings, although not by as much as lunch and dinner revenue, and that restaurant sales have been gradually recovering.

On a mid-March morning, about 10 seats, or about half the shop's capacity, were filled by customers of various ages before 9 a.m. Some, donning suits, were likely on their way to work, while others appeared to be on the way home after finishing night shifts.

"It is actually the second time for me to eat yakiniku here in the morning," said Hidetaka Hara, a 55-year-old resident of Tokyo. "It's a luxury to have yakiniku for breakfast, and it reduces my stress levels," he said. 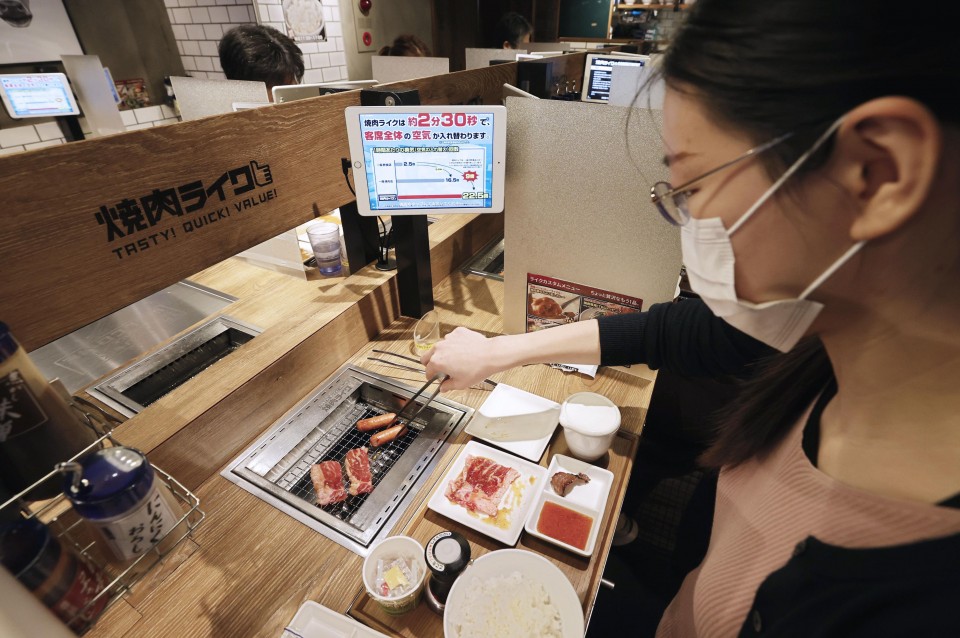 Photo taken on March 3, 2021, shows the breakfast service that has begun at a "yakiniku" grilled meat restaurant in Tokyo's Shimbashi district amid the coronavirus pandemic. (Kyodo)

A woman in her 40s who only identified herself by her family name of Maehara, said, "I really like it. I want to have the morning yakiniku even after the pandemic ends, if they still have it here."

For example, many elderly people live by themselves and cooking for one can be an expensive way to eat, according to Watanabe.

Working women, meanwhile, often need more time in the morning than men as they tend to be the primary caregivers in their families, and eating out could be more practical, especially for working mothers.

Established in 2018, Yakiniku Like is known as a restaurant brand where customers, many of whom are female, can drop by alone and enjoy a quick and reasonably priced meal.

Well-ventilated, it fits into a lifestyle of avoiding the 3Cs under the pandemic -- closed spaces, crowded places, and close-contact settings, according to the company. 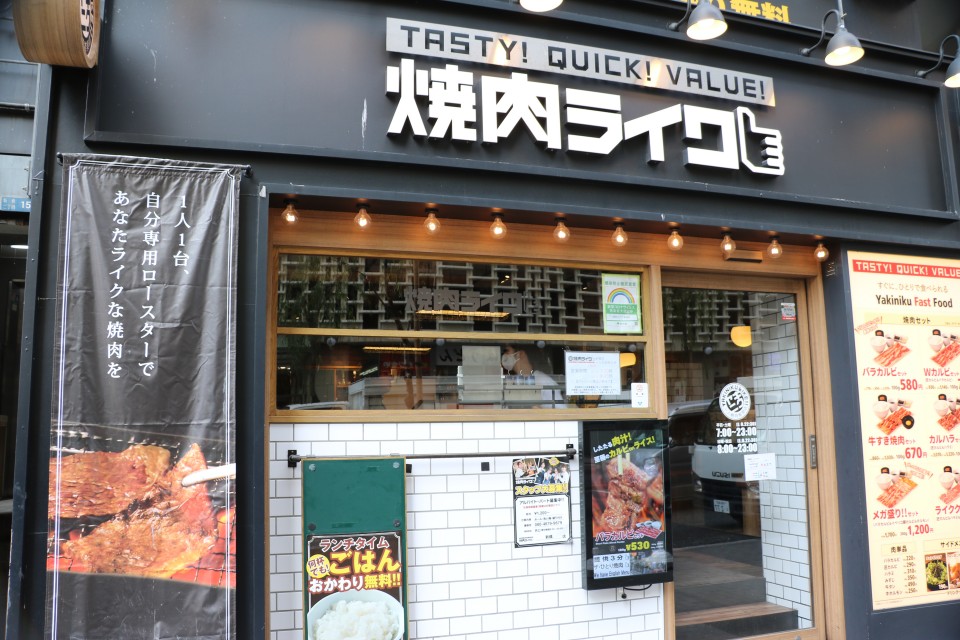 We are planning to continue offering the yakiniku breakfast sets after the early closure request is lifted because we are convinced there is a demand based on reactions of customers and sales of the breakfast sets," Arimura said ahead of the end of the second state of emergency in the Tokyo area at midnight on March 21.

"I'm glad that we were able to develop methods and strategies, such as morning yakiniku and takeout menus, as well as delivery and drive-through services (at some other shops) that are likely to remain from now," he said.

The eatery in the Shimbashi district, a commercial hub, is now open from 7 a.m. to 9 p.m., with the closing times extended by an hour after the coronavirus emergency was lifted.

The emergency was imposed in the Tokyo metropolitan area in early January and extended to other areas of Japan, with the government offering financial support to drinking and dining establishments that comply with requests to close early.