Japan's vaccine minister said Sunday that Pfizer Inc. will increase supply of its coronavirus vaccine, allowing the country to procure enough doses by the end of September to inoculate all eligible residents.

Taro Kono said on a Fuji TV program that Prime Minister Yoshihide Suga and Pfizer CEO Albert Bourla agreed to boost supply during telephone talks Saturday held as part of the premier's three-day visit to Washington for a meeting with President Joe Biden. 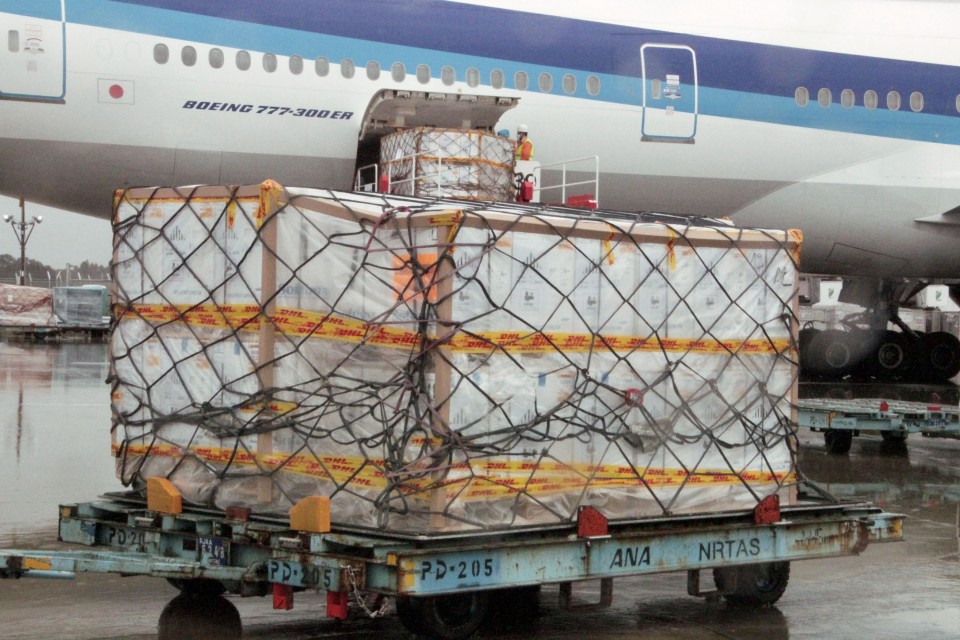 Photo taken at Narita airport near Tokyo on April 5, 2021, shows cargo containing Pfizer Inc.'s COVID-19 vaccine unloaded from a plane upon its arrival from Belgium. (Kyodo)

"We will work on a detailed schedule," Kono said during the program.

Under its current contracts with the U.S. pharmaceutical giant, Japan is due to receive enough doses for two shots for 72 million people. In all, the government currently plans to offer vaccination to all residents over 16, or some 110 million people.

Kono, meanwhile, said Pfizer is expected to file a request to expand the use of its vaccine to adolescents aged 12 to 15, having submitted a similar request in the United States. The government will take this into account in rolling out vaccinations, he said.

Japan trails far behind countries such as Britain and the United States in providing vaccinations. Pfizer is the only COVID-19 vaccine supplier approved in Japan at present and all supplies are imported.

Bourla was quoted by Japanese officials as saying Pfizer would promote consultations swiftly and coordinate closely with the Japanese government.

Japan only began inoculating its elderly aged 65 or older -- about 36 million people, or some 29 percent of its population -- on Monday after beginning its campaign with health care workers on Feb. 17.

Out of Japan's 4.8 million health care workers, about 1.1 million, or 0.87 percent of the population, had received at least one dose as of April 9, according to the Health, Labor and Welfare Ministry.

Seeing a recent spike in the number of infections, the Japanese government has been expanding tougher COVID-19 restrictions. Four more prefectures will be added Tuesday to complete bringing the country's three biggest metropolitan areas centering on Tokyo, Osaka and Nagoya fully under the measures less than a month after a state of emergency was lifted.