Three months on from the Feb. 1 military coup in Myanmar, Japan's diplomatic efforts to persuade the Southeast Asian country's junta to reverse course have yet to bear fruit.

Myanmar security forces have killed some 750 peaceful protestors and other citizens, according to an activist monitoring group, a sign that Japan's suspension of new aid projects, alongside sanctions by the United States and other Western powers on senior generals and the companies they control, have not been effective in addressing the crisis.

Referring to his meeting April 24 with Association of Southeast Asian Nations leaders in Jakarta, junta chief Min Aung Hlaing said he would carefully consider suggestions from ASEAN on steps to end the turmoil, but only after the situation stabilizes -- signaling the junta is unlikely to stop using force, receive an ASEAN envoy or hold dialogue with rival groups anytime soon. Myanmar is a member of 10-member ASEAN. 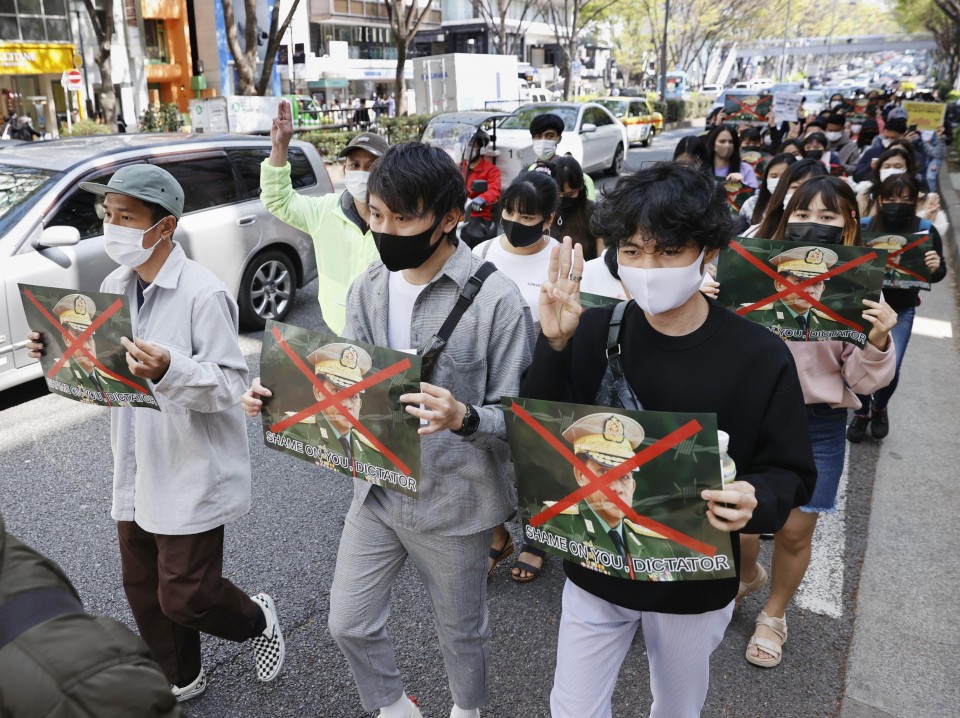 Myanmar residents in Japan march in Tokyo's Omotesando area on March 27, 2021, in protest against the Feb. 1 military coup in Myanmar. (Kyodo) ==Kyodo

Citing the general's thinking, some scholars say the Myanmar military has been so preoccupied with beating its political enemy, detained leader Aung San Suu Kyi's National League for Democracy, that it has no intention -- at least for now -- of listening to what foreign governments and the United Nations have to say.

"At this stage, there is a limit to what diplomatic efforts Japan and other countries can make to get the military to change course, as its immediate priority is not to lend an ear to what they say but to consolidate its grip on power by getting rid of NLD forces," said Yoshihiro Nakanishi, a Myanmar expert at Kyoto University.

Min Aung Hlaing seized power after detaining Suu Kyi and senior NLD members, alleging fraud in a November election that gave the NLD a landslide victory. The election commission, however, said the vote was fair.

On Feb. 1, the Tatmadaw, as the military is known, declared a yearlong state of emergency and said a "free and fair" general election will eventually be held.

This has led analysts to suspect the junta may call an election without Suu Kyi and the NLD and that it believes that once a government that includes generals is elected, the international community would have no choice but to recognize it as a "democratic" entity.

Nakanishi, an associate professor of the university's Center for Southeast Asian Studies, said in an interview that the standoff between the junta and the National Unity Government, set up in opposition to military rule and led by Suu Kyi associates, may last for a year or longer.

Launched April 16 by NLD parliamentarians, anti-coup protest leaders and representatives of ethnic minority groups, the NUG is demanding that the junta immediately cease its violent crackdowns on demonstrators, release Suu Kyi and other detainees, and restore the democratically elected government.

Nevertheless, Nakanishi argues, factors such as economic paralysis and a full conflict with ethnic minority insurgents in border areas may propel the generals to change their mind.

In fact, the sharp contraction in the Myanmar economy -- triggered by strikes by workers and civil servants, as well as the halt of aid by foreign donors and the suspension of trade and investment by foreign businesses -- could create such a possibility.

Some analysts even say the crisis-hit country stands on the verge of becoming a failed state.

Before the military takeover, the World Bank had forecast Myanmar's economy would expand 5.9 percent in 2021, but it now estimates the economy will shrink 10 percent. Similarly, the U.N. World Food Program estimates up to 3.4 million more people will go hungry in the next six months.

"The military is now preoccupied with domestic affairs, but I suspect there will be a time when the international community can play a role in ending the crisis in Myanmar," he said.

Under such circumstances, Japan, while keeping channels of communication open to the Tatmadaw, is considering halting ongoing official development assistance projects as part of international pressure on the generals.

According to the Foreign Ministry, Japan extended ODA totaling about 190 billion yen ($1.7 billion) to Myanmar in the year to March 2020, by far the largest contributor other than China, which does not disclose corresponding data.

In parliament, a group of nonpartisan lawmakers, led by Gen Nakatani, a former defense minister, is seeking to enact a law enabling the government to impose sanctions on foreign individuals and entities over human rights violations. 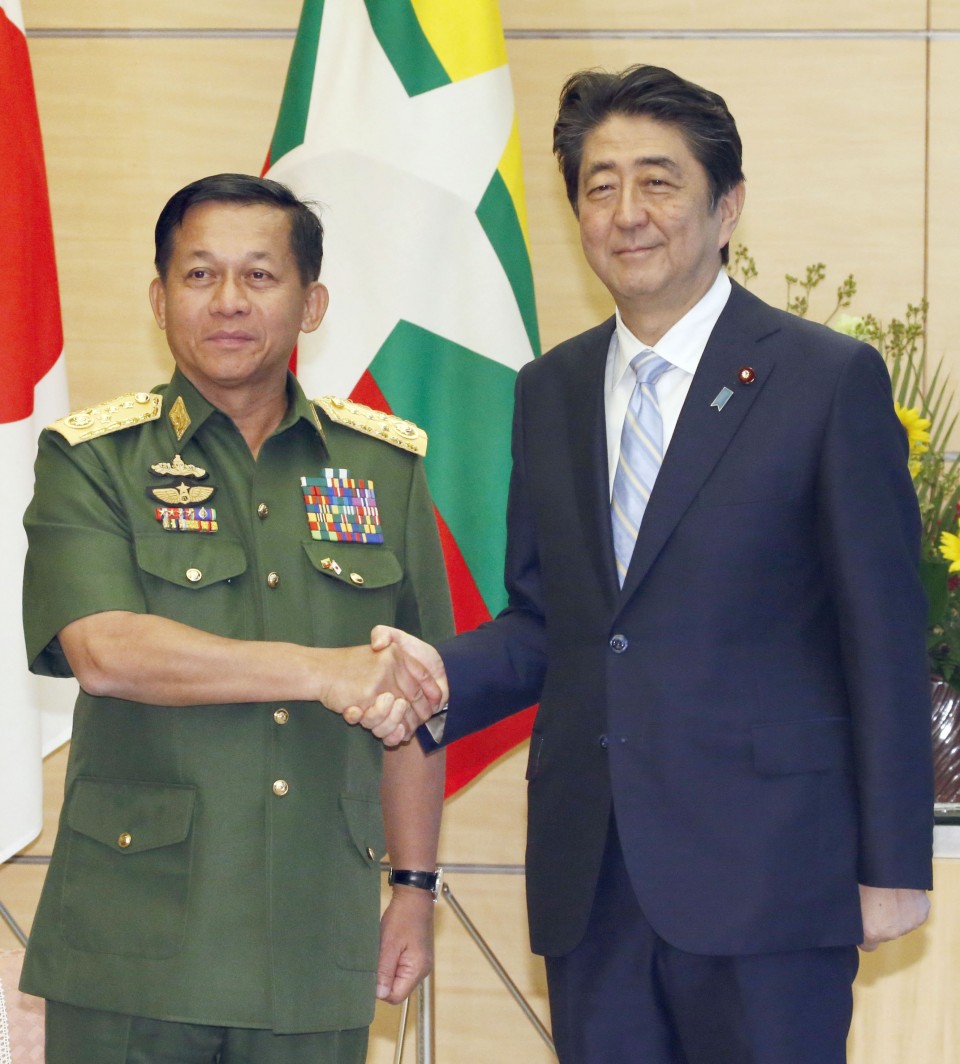 Pro-NLD Myanmar residents in Japan are calling on parliament to pass the sanctions bill as soon as possible. They are also pushing Prime Minister Yoshihide Suga's government to immediately suspend all non-humanitarian aid projects that benefit the junta and lobby the United Nations to impose a global arms embargo on the Tatmadaw so as to block weapons supply from China and Russia.

Foreign policy experts say Japan should continue to engage with the junta while keeping the suspension of ongoing ODA projects and invocation of the envisaged sanctions law as policy options.

With the United States and European countries stepping up targeted sanctions on Myanmar, the experts suggest Japan, in partnership with ASEAN, broker talks between the junta and the NUG as the country, unlike Western powers, has ties with both sides.

"Japan should insist on dialogue but always with the goal being the restoration of democracy, with a price to be paid if the junta does not move substantively in that direction," said Brad Glosserman, deputy director of the Center for Rule-making Strategies at Tama University in Tokyo.

"Japan should apply pressure in concert with the West, but it can do so in a different mode and means," Glosserman said in an email, suggesting that Tokyo persuade the generals while avoiding publicly humiliating the Tatmadaw.

Along with such a division of labor with the Western powers, former diplomats recommend that Japan deal with the Myanmar crisis in coordination with ASEAN, China and South Korea in the so-called ASEAN-plus-three framework.

The recommendation is part of policy proposals over Myanmar a group of former Japanese diplomats including Yasushi Akashi, a former U.N. undersecretary general, filed with the Foreign Ministry on April 23.

But skeptics warn that under the shadow of a great power rivalry between the United States and China, Japan must conduct careful diplomacy with China over Myanmar because of Beijing's desire to boost its clout and gain access to the Indian Ocean via its strategically important neighbor as a major arms supplier, aid donor and trading partner.