If beating Argentina 3-0 is anything to go by in the world of soccer, Japan's under-24 side can take a good deal of confidence into the Tokyo Olympics this summer, provided the games go ahead as planned.

The team of J-League talents such as Kawasaki Frontale midfielder Ao Tanaka and European-based stars, including 19-year-old Takefusa Kubo, proved they can put up a fight against the world's best with Monday's statement-making win.

Playing in their first international matches since the Olympics were postponed in March last year, Japan were schooled by the more aggressive and astute South Americans three days earlier, when they lost the first of their two friendlies 1-0. 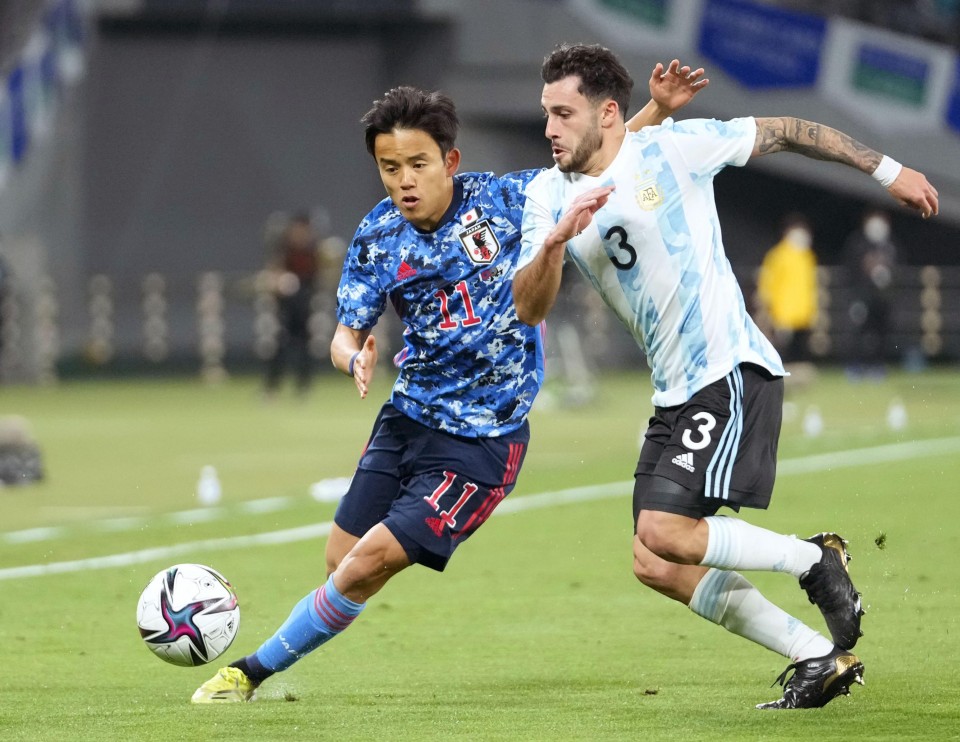 Japan's Takefusa Kubo (left) battles for the ball with an Argentina player in their under-24 international friendly, won 1-0 by Argentina at Tokyo's Ajinomoto Stadium on March 26, 2021. (Kyodo)

Akinobu Yokouchi, who ran the team while manager Hajime Moriyasu focused on the senior team, believes the manner in which the players responded to the defeat demonstrated their maturity.

"The positive thing was having players confronting the tasks they each had at hand and overcoming them," he said after the team had to prepare amid the unusual conditions demanded by the pandemic, including separate buses and locker rooms for the domestic and European-based players.

The hosts were clearly second best in the early stages of the first tie in Tokyo, with Argentina having a penalty shout turned down and two chances denied by the bar before scoring the 21st-minute winner.

It was the kind of intensity Japan will need to cope with for a full 90 minutes during the Olympics. Yet Argentina did not maintain that level of dominance or rhythm of play, especially in the second game.

The visitors alone know whether or not that apparent drop was induced by the hosts' growingly assured play. With nine starting changes made for Japan compared to the visitors' four in the second game in Kitakyushu, the hosts did look the fresher of the two sides.

Football: Superb Japan down Argentina 3-0 in 2nd U-24 friendly

Still, offering such a stern challenge at this level with almost a whole set of new players was a testament to Japan's increasing depth. It has indeed reached a stage where even playing for a European club no longer warrants a place on the side.

"We'll need players who have unique strengths and those who can express them against any opponents," Yokouchi said, looking ahead to four more friendlies, capped off by a meeting with Spain on July 17, six days before the Olympics opening ceremony.

With only 18 players to be registered, two of whom will likely be goalkeepers, and Moriyasu able to name up to three overage players, the battle to reach the Olympics as one of the 13 remaining field players could be fiercer than ever. 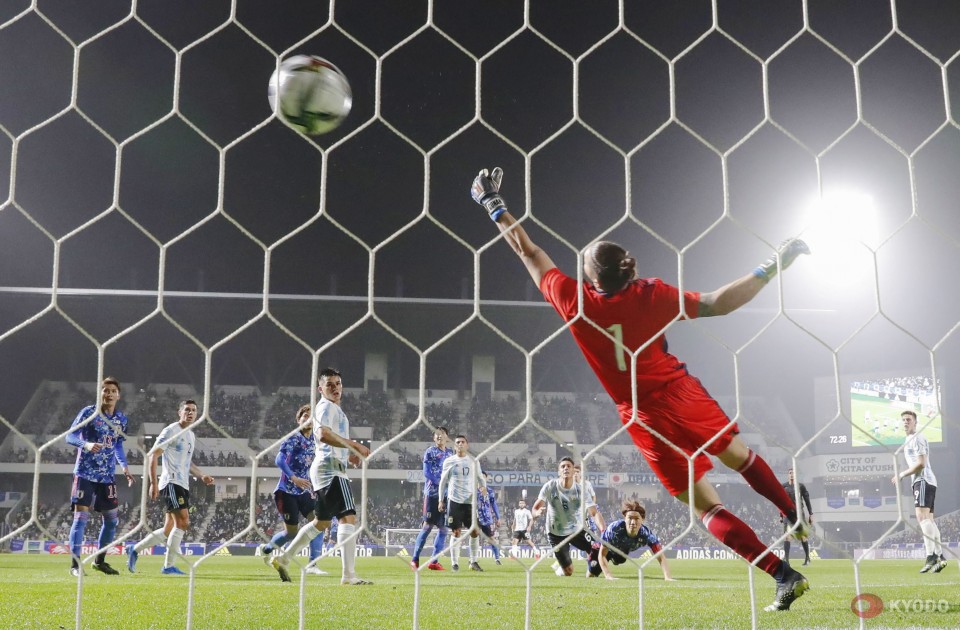 Ko Itakura scores Japan's third goal with a header past Argentina goalkeeper Jeremias Ledesma during the second half of an Under-24 football friendly on March 29, 2021, at Kitakyushu Stadium in Fukuoka Prefecture, southwestern Japan. (Kyodo) ==Kyodo

Bologna's Takehiro Tomiyasu is already a regular at Japan's senior side and will almost certainly marshal the defense this summer. Kubo, on loan at Getafe from Real Madrid, moved past his La Liga struggles this term, cementing his place in the squad with class displays that have belied his age.

The remaining spots, however, appear up for grabs.

Kawasaki winger Kaoru Mitoma, who dazzled in his debut J-League season last year, was probably the biggest loser from the two ties, losing possession against the fired-up visitors in the first game before being allowed just a few minutes off the bench in the second. Yet, the experience could drive him to new heights in the coming months.

"We'll all need to leave our marks at our respective clubs and try to get closer to the gold medal," said Groningen's Ko Itakura, who headed in two goals in the second game.

While anxiety and uncertainty remain about staging the Olympics this summer during a global health crisis, that scoreline, one of Japans' best ever, at least provided a lift to the players and fans.

"We don't know if we will have a stage to perform on, but we will each get ready," Kubo said.